I discovered the cursed oeuvre of José Mojica Marins (born 1936) in an Italian horror fanzine I got hold of in 1997 from Rome. They dedicated a lot of pages to an incredible Brazilian phenomenon: a costumed hero like none other – a bizarre magician-like figure with black cape&high hat sporting long, grotesquely curved nails. In spite of his supernatural Mephisto appearance, Coffin Joe is a profoundly profane, agnostic and heretical figure. 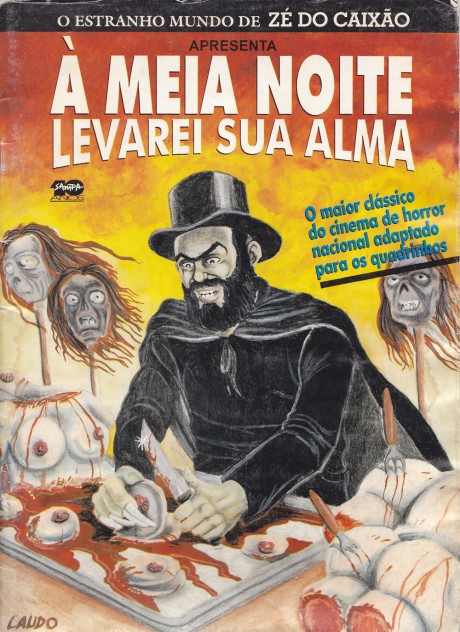 José Mojica Marins and his Coffin Joe Trilogy (At Midnight I’ll Take Your Soul aka À Meia-Noite Levarei Sua, This Night I’ll Possess Your Corpse/Esta Noite Encarnarei no Teu Cadáver 1967 and Embodiment of Evil Encarnação do Demônio 2008) is mostly associated with the Brazilian Mouth of Garbage film genre produced in the Boca do Lixo (Mouth of Garbage) downtown area of São Paulo. This transgressive hybrid cinematic beast, is a steady part of the so-called “udigrudi” (a mock wordpla on underground); part exploitation slasher movies, part French New Wave and part pornochanchada.  The fact that it doesn’t spring to mind as a precious precursor to excess cinema or later shockers shouldn’t come as a surprise. It’s looks are more Le Theatre dr Grand Guignol than A Serbian Film. It’s not mentioned in Chas Balun’s seminal article I Spit on Your Grave: Films That Bite(The Deep Red Horror Book 1989) in the the mostly (American and Italian) phylogenesis of later splatterpunk horror spanning from Blood Feast (by Herschell Gordon Lewis 1963) to Nekromantik (1987 by Jörg Buttgereit). I consider Blood Feast and At Midnight I’ll Take Your Soul – both born in 1963 – as groundbreaking in their depiction of gore, cruelty and the macabre, human sacrifice and murderous intent. 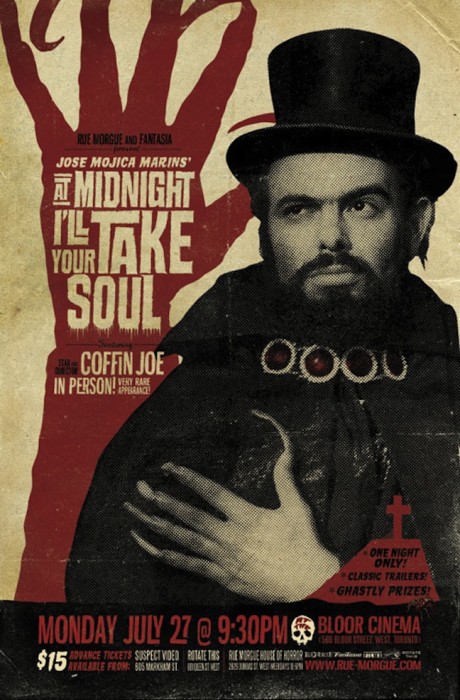 The legendary figure of Coffin Joe is basically an undertaker of a small Brazilian town.  At soul he is a true Sadean, a materialist amoral atheist with a vengeful heart that with every gesture, every utterance and plotting device is just showing how superstition, credulity and meek moralizing will doom yourself and permit further abuse. 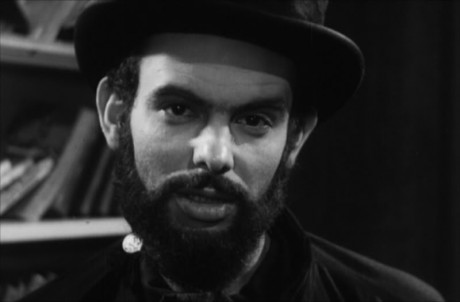 His only ‘weakness’ (if it could be called weakness – it’s more like an obsession) is a sort of Darwinist immortality cult – sexual REPRODUCTION as an excuse and an end in itself for all monstrous acts and killer instincts. Mere carnal belief in mating with a women and siring a descendent becomes his true religion – am outcome that seems to be denied with every step he makes, with every missed tryout. His will to reproduce – becomes one of the most destructive and nihilist demonstrations in the history of cinema (and a curse upon dominant positive thinking philosophy I might add). 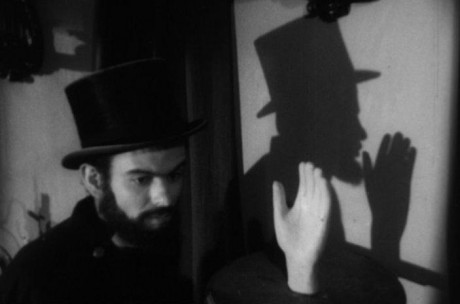 Coffin Joe is a deeply troubling Nietzschean ideologue of sorts. His strange breed of Social Darwinist anti-humanism is akin to the “Might is Right” school of thinking cross-bred with a methodical application of desecration at all levels of society able to bust most well-meaning intentions and norms. The unmaking of friendship, empathy and any kind of higher purpose is relentless. 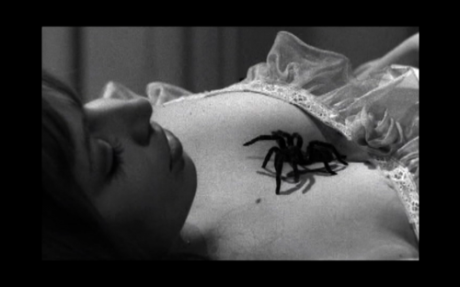 He use of tarantulas for his purposes – befriends him with Dracula and his malign and maligned species and creatures of the night (spiders, wolves, rats, flies, bats). He is himself a creature of the night – there are very few scene of daylight, he’s mostly erring trough cemeteries, forest bushes and lonely routes. Coffin Joe egotism and individualism is shocking and compelling, in spite of his cliched appearance and disgusting demeanour. He breathes black magic and the evil eye. The magic of money is his highest ally and he is constantly arguing against rules, customs and old conservative habits (such as fasting or the belief in the afterlife or honouring the dead).  Compared to literary and cinematic Svengali (the cliche anti-Semitic Eastern European antihero) depictions of the manipulator, the conspirator and hypnotist – Coffin Joe is not at all a manipulator or dark puppet master. He is a very outright, very open promulgator of what he preaches and is apparently without converts or adepts. His singularity makes him easier to hate as a fluke of nature, as a freak – but a very specific freak he is. His black magic is very visible and is based mostly on surrounding fear and superstition – an ample material that invites reworking. 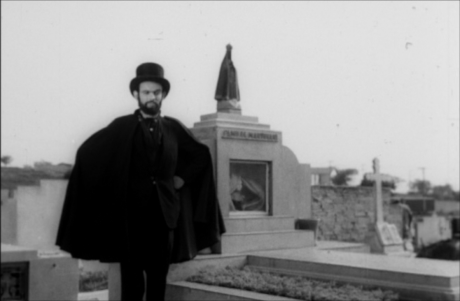 He provokes fear by using all the props and hideous habits without ever investing them with the ‘powers’ other than those attributed by the majority. His most potent weapon is using the Fear Of Death and Damnation, the non-finality of death, the Fear of Hell for his own particular egotist purpose. He is a mundane anti-priest of sorts as well as a propagator of hedonist principles. 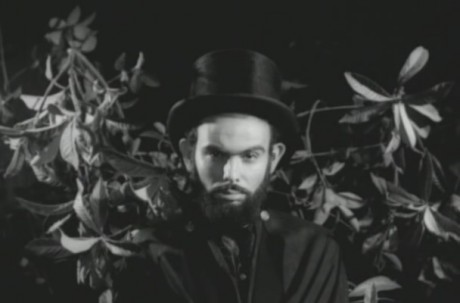 His own apparent immunity and work with death and its effects in the real world derives from his unmediated contact with cadavers and putrescience. In order to subdue and humiliate, Coffin Joe uses the fact that death is not just disappearance, just mere death or end of pain. In a world activated by invisible powers, damnation, sin and taboos – he is is seemingly the rationalist Master of All Illusions. Zé do Caixão aka Coffin Joe is a lecherous, gluttonous antihero, who derives power from immunity, a true modern demon at the centre his own secular inferno. His craving for meat, lamb, women, booze goes hand in hand with his almost magical immunity from otherworldly spirits and the wrath of any secular or sacred powers. His use of profanity is always supported by the cruelty of his acts, his Berserk bouts of rage. 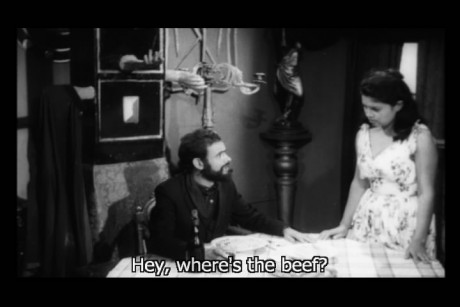 His only true antagonist is a gypsy Clairvoyant lady – also completely cliche – the most unlikely heroine or ‘hand of fate’. She’s is the proof that cliché works, that the tired iconic witch image does the trick. One could argue, that the archaic astrologer – almost voodoo-like gypsy soothsayer is the only curse left to confront the Social Darwinist possession. Religion is impotent and only seems to feed and encourage the atheist rage, so that only q debased witch – the original low-class marginal storyteller works as a match enough for Coffin Joe. She is the one who produces the apocalyptic ending as a auto-generated trap. The teleology of power gives room to the teleology of doom and self-inflicted recurrence. The apoteotic final series of gory events, from the owl to the vengeful spirits is nothing but the self-made man-made ending, the torture of re-enacting mistakes and disastrous happenings. 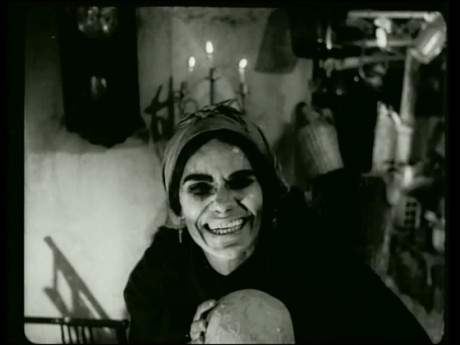 Once you meet Zé do Caixão – you will never forget or be able to go back again to your hardly innocent self.