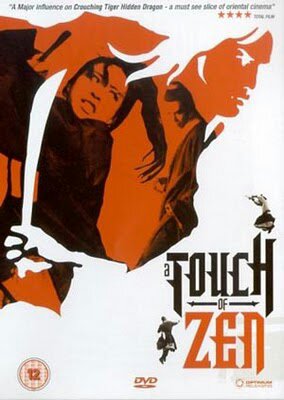 I always tought there was some forgotten, misplaced post about this movie on the blog. This is a cult kung fu movie offering an Eastern, Chinese pragmatic interpretation of haunted places. And it’s not your usual B movie staple. It’s a beautiful, long winding story that drifts in and out of legend. If you didn’t see a martial arts movie in a long time this is your chance. Well don’t expect just perfectly choreographed wire fu air ballet scenes but also long takes, misty atmosphere and gradual discoveries.

Chinese believe in ghosts but the ghosts populating this movie are just invoked out of survival needs and as a way to protect oneself against unequal odds. There is always this pragmatic side of Chinese spiritism, a detective’s scepticism that employs ghost busting techniques. It’s really a treat to compare in your head the usual Gothic western dark manor with this Eastern description of a semi-abandoned garrisons, wild plants rustling in the wind and growing inside crumbling and majestic houses. Night or day scenes are masterfully dreamy, enveloped in a perpetual protective mist, a steam that hides and protects the heroes and keeps the mystery intact. Ghost houses are places of retreat and protection against worsening corruption and governmental oppression. It’s a interesting philosophy of ruins that aren’t just places of fear and decay – they act as primary shelters to the fugitives and the hunted. Hearsay, legends, superstition are wisely used against the oppressor, against greater numbers and punishing expeditions.

And everything happens with incredible calmness, tiny birds nesting around the house and the undulating grasses subtly animate the picture without any particular action or aggressive outbursts. 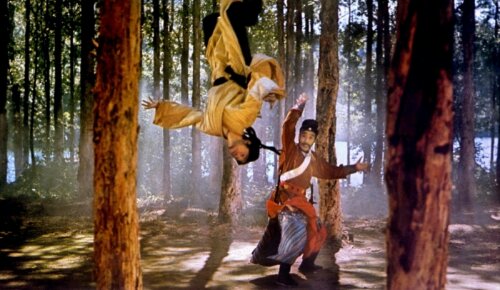 It’s really unforgettable, the music and the introductory scene of the early early (Chinese start work at 5 mostly) waking up of the village like any other Chinese village I imagine, with the young hero portrait artist and minor provincial scholar living with his mother and going out and opening his shop, as he does every morning. Legend and adventure appears without warning but everything in the air prepares it. The silences are pushed to limit and there is always surprise discoveries, unexpected guests, sudden changes and nobody is who they seem. You’ll recognise immediately the lasting influence it had on Kill Bill.
This soft ambiguity and miraculous existence permeates through the whole movie, even when we already know the plot or understand the roles. Even if the movie really references Bodhi Dharma and Zen (Chan) Buddhism and Shaolin monks – I would definitely place in my within a larger taoist tradition, especially remembering the Lao Tzu saying that you don’t need to travel to the next village because you already know what’s there, you already heard it’s rooster calling and that is perfect life. Well, yeah, twisting it around, it also means that the most unlikely adventure and wonderous happening will arrive right under your nose.

I also totally love the heroine of the movie. She’s perfect, a determined and rightfully dominant figure, a true kung fu master, protecting and saving the ass of the poor, physically unfit and frightened (even if intellectually endowed) lover.