Menu
Browse: Home » ART ENCOUNTERS oF tHe …wHaT kiND? [Timisoara 2015]

ART ENCOUNTERS oF tHe …wHaT kiND? [Timisoara 2015] 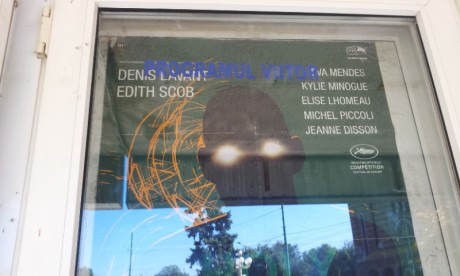 Fresh from the wrap-up, I am going to review the art encounters event in Timisoara as a movie, a sub-genre movie, that could be either a horror comedy or corporate thriller. Haven’t decided yet, maybe we should do a poll. I’ve been blogging mostly on movies these years, so I decided to treat Art Encounters as a sort of art flick ‘sploitation. 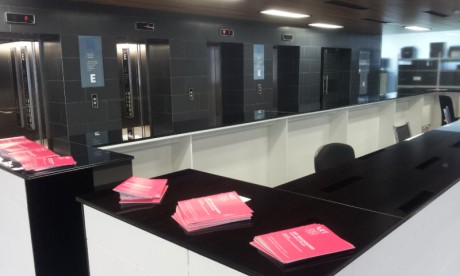 No juicy bits. No easy way out of the Business Center this time. It’s a corporate thriller movie set in future present not of Timisoara 2015 specifically, but of interlinked deconnected spaces or a “any-space-whatevers” outside of temporal boundaries. This is the transnational space of just-in-time productions, shored up resources, of stealthy transactions, brain drain, promiscuous exchanges and omnipresent contracts where libidinal and financial juices combine. 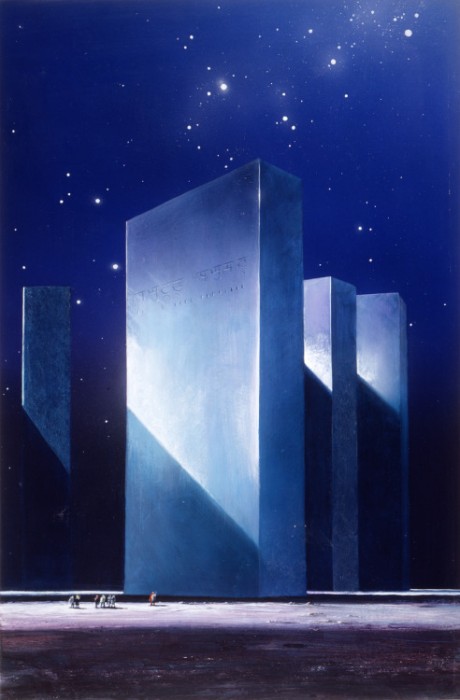 It features a strange, insidious and invisible Lifeforce, a strange attractor that is able to summon art dealers, heads of collections, directors, theoreticians, curators, journalists, art critics, a force that is making artists pay for their own participation, one that is able to shift blocks of compressed attention, conjure up vast improvised locations so it can better pop up galleries out of thin air and glamorize former spaces of dereliction, ruin and stasis into gaping holes of “unlimited possibility”. Timisoara is preparing itself for eligibility, for the prenuptial maiden dance of Cultural Capitalization – and while it is still being groomed and deodorized, the vagueness and empty expectation is already being harvested as a new untapped resource to be extracted, reblogged and circulated. 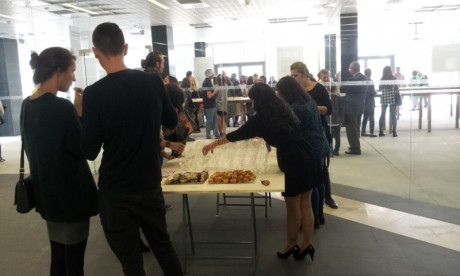 Being left out or FOMO (Fear Of Missing Out), the postponed fear of #losership (Ion Dumitrescu 2015), the fear of missing out “encounters of the turd kind” (Felix Petrescu 2015) or the fear of obsolescence (Jacques Peretti 2014)  is enough to push forward the marketing and sell out of pure virtualities – the auction of intermingling, of encounters, hookups, of art speed dating, gallerist thaumaturgy, artist/art collector tactile fantasies and future collaboration plans. Art Encounters is being nourished exactly out of this virtual heap of non-existent humus and trickling cash flows. Instead of actualizing virtualities, the inverse is happening at an increasing rate, virtualities are being extracted out of actual planned events. Promises stay just promises because nothing has to actualize, potentialities stay just potentialities kept hovering above a maze of what-could-have-been or WHAT IF situations. What used to be “manufactured specifically by the movies can now be found more or less everywhere” (S Shaviro 2010) including Timisoara. It is a movie that glides trough these slick insulated but interconnected spaces catching them in mid-division, just at the point of corporate mitosis, when they are still part of an undifferentiated embryonic stem cell tissue out of which all malls, airports, conference rooms, food courts and creativity incubators are derived.

Virtual events such as Art Encounters riding on the wave of 2021 Tomorrowland improbability, are being extracted from the state of affairs of a gap-toothed, cold water (the warm water was cut off in the entire city following unpaid bills) and constantly depreciated present. The deep thirst for innovation no matter what is able to manufacture these sudden bursts of frenetic activity – these sudden spikes in numbers, bodies, hormones-pheromone levels, heighten moods and follow-up downers, paving the way for future mood enhancers. These events are expanding and contracting mood ratios like mood enhancers themselves, greasing the way for other sorts of commercial transactions, and this is no mystery, because it is their stated purpose to woo and flirt financially. 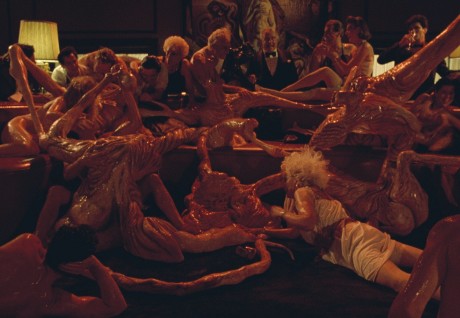 The Marxian drama of total subsumption of labor under capital is well under way, and the same calculus of risk assessment and loosing out is being applied to real estate, start-up incubators, art encounters, friendships or erotic conquests. SOCIETY (Brian Yuzna) is this incredible funny horrific movie from 1989, at the cusp of end times featuring societal human resource encounters at a very visceral and non- metaphoric level (from inter- species / class- depredation to the tissular/phagocytosis level). Inhuman relations is networking as wetworking – a freshly stretched bubble gum flesh. While the East was fed on a rich plasma soup of Beverly Hills entertainments, slick lifestyles and conspicuous consumption, this US horror movie was imagining and recording its own literal orgies of societal renewal(innovation?) via high class phagocytosis and metastasis. The premise of the movie featured on the poster of Society states a fairly basic line: “The rich have always fed of the poor. This time it’s for real”. The ritual of shunting (term used in the movie by Brian Yuzna) – involves the high class draining, physically assimilating and hollowing out the bodies of the inferior/lower class (species) victims. The original script was based on an aborted project of THE MEN (with Dan O’Bannon of Alien fame) postulating a ruling elite as a sacrificial blood cult. 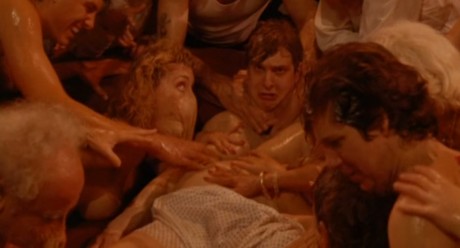 Latex effects courtesy of Mad Screaming George apart, Society is radical just because it dares to be as radical as the reality itself, materializing the idiom of human resources as cancerous hyper- plasticity, as malign biomass busy colonizing and engulfing all opposition while celebrating its insider couplings and encounters with incestuous jouissance. 1989 Society is being supplanted by other kinds of multifaceted abstract geometric horrors akin to the Hellbound Hellraiser II Leviathan: Lord of the Labyrinth entity (Tony Randel 1988). This rotating, elongated octahedral bipyramid is floating about the maze of Art Encounters vomitoria, Timco halls, makeshift galleries, side-events, Potemkin art fun fairs etc. 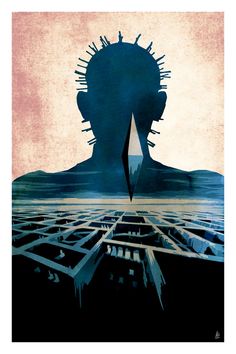 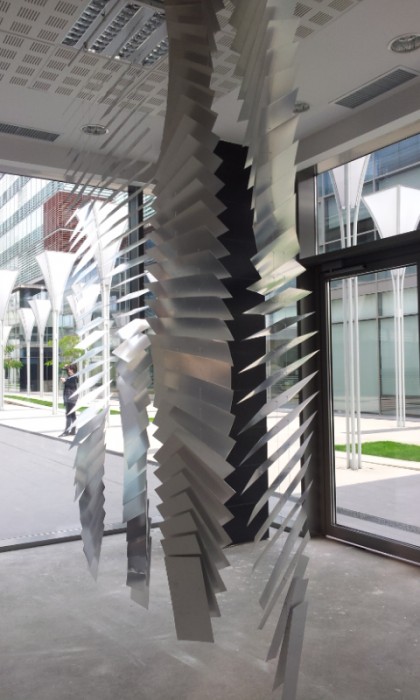 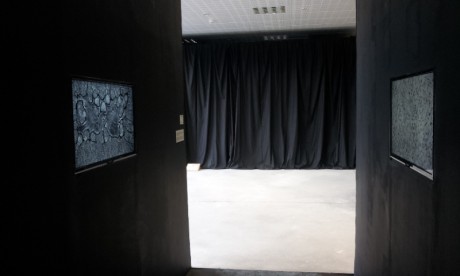 One has to pull herself/himself together all the time while changing locations, icy rooms, any-space-whatever’s, entering on one side exiting at the other far end, evacuated from FB attending guest lists and discharged as traffic data waste trough the orifices of Timisoara and other entrepreneurial meatgrinders.

Dereliction and business center towers have become indistinct facets of capital flight, the already- emptied hulls of molting capitalism shedding its skins, newly built headquarters rising each time financial speculation is beaming itself inside, upside or outside of the chosen investment perimeter. 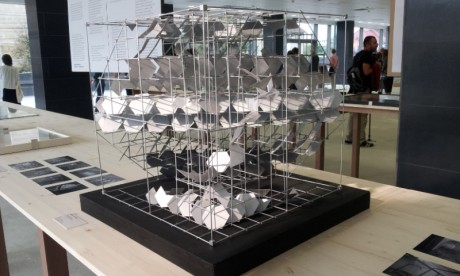 At minute 13:24 of the movie made with Mihai Salajean [Green Hell is the New Heaven, Timisoara 2012] we are being led by the local invasive species towards new construction sites as territories of relentless urban warfare, of Amazonian-scale depredation, with looming high rises in the background and black tramway no 5 like Meat-Trains carrying human resources wherever the boom & bust economy is leading them. We sensed the future Timisoara Business Center as a looming presence, a distant but powerful hum emanating all around the perimeter. At the same time we could never discern the relevant data in all that noise, while the steady search for corporate founding myths, for genealogical bifurcation was already under way. Arriving trough a hole in the future, the corporate world in Romania (and elsewhere) always needs to be propped up, either by neo-dacian local deities or with the help of futuristic constructivist segments never too old to be “avant-“. 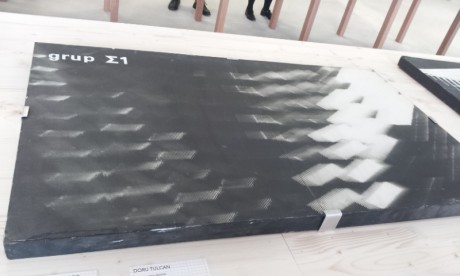 The properly homogenized steel & glass headquarters are building in reverse their proper polyhedral symphony, constructing kinship and pedigree credentials out of past events and archival material. This is why SIGMA -Σ I- group was the needed ante- creative hub, as premonition and synergistic blueprint for the mushrooming of present future business plazas of the new economy. The resulting corporate architecture codes platonic essences and resonates with premonitory hidden accords, warping silent harmonies over time and space into manifest destinies oozing cool breezy pools of cultural indefinition (Manuel Castells 2000).

SIGMA explorers into geometric, arithmetic and exponential increase were brought back from the Romanian 70s and 80s to sharpen the talons of office space eagles, to polish the plexiglas surfaces, assemble tripartite walls of modular cubicles and gently slide on chromed automatic stairs. 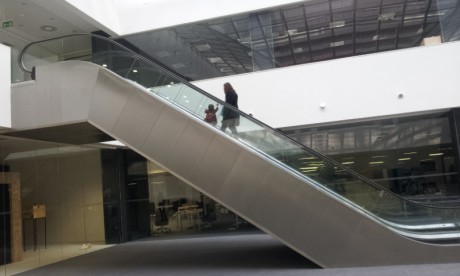 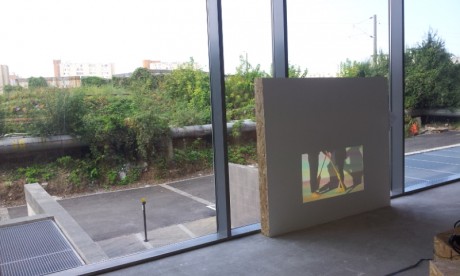 * Rainald Schumacher and Natalie Hoyos are the curators of this event. I am going to use this small Note to introduce an older idea I’ve been toying around while trying to redefine curatorship as a neuromotor blocking agent, rooting it not in the European, Latin root of curare “to take care of” or “caretaker”, but the curare of the South American tribes – a neuromotor and neuromuscular blocking agent, a common name used for various poisons extracted from plants used on the tip of arrows for blowguns and able to competitively or reversibly inhibit a subtype of receptor found at the neuromuscular junction. It basically acts as a muscular relaxant and it has had revolutionary conceptual implications for Anesthesia that was redefined as a triad of narcosis, analgesia and muscle relaxation.  According to this etymological reshaping of the term, curating is aimed to paralyze the viewer, to entrap and relax the prey, to capture audiences like fish paralyzed in mid river.

** I haven’t been naming many persons or people, or even mentioned that I was also a small part of the movie crew, but I did it in the belief that most of the people don’t really matter, because there are other infra- and transpersonal forces pulling at the strings of such blockbusters, even if attention is focused on lists of producers, sponsors, individual names, brands or particular art pieces. Also its clear that those involved in making a blockbuster don’t get mentioned at all because everybody leaves anyway before the end- credits finish and the long list of special effects studios rolls out.

*** Otherwise I am deeply thankful and indebted for all the friendly faces, and all those encounters of the third kind who have kindly hosted, kidnapped, advised, enlivened and even played some magic tunes while we were shooting on the set. 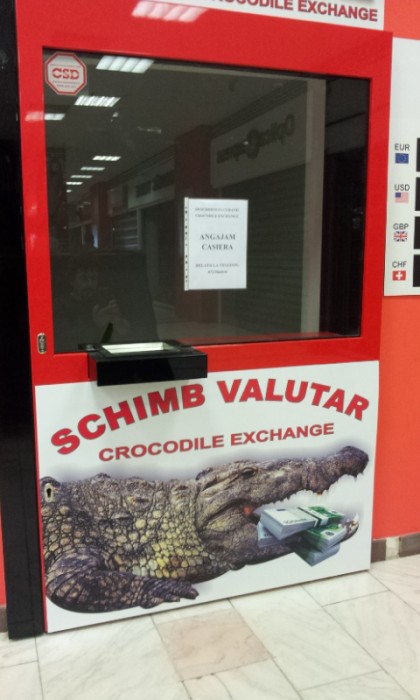