“I will use ‘doxa‘ throughout in the sense of ‘opinion’, ‘conjecture’ or ‘belief’. Doxa can still feature as the horrifying other of critical thought.”-Roger Luckhurst

Why is Candyman so compelling and powerful after all these years? Candyman is based on a Clive Barker story called The Forbidden. Forbidden urban legends are contemporary superstitions, the true serial killer folklore – all lumped up as ‘disqualified, debased knowledge’ still attributed to the ‘uneducated’ and the ‘simple’ persons, and still correlated with lower class- and color- lines. I will try and dig for accursed knowledge as part of this tradition of debased but vengeful information, of purulent data. In their primary unutterable form, curses (both as magic spells and as profanity) are very powerful forbidden formulaic phrases or taboo words that ensnare, command, overpower and conspire in a boomerang-effect of dire consequences.

Bernard Rose’s Candyman enacts self-actualization of such residual, parasitic and undead knowledges. Cursed knowledge was never limited to village life or occult traditions. Cursed knowledge is everywhere, it leaves nothing untouched; it is that which makes you an unwilling participant in the legends. That which weaves you as a eternal contributor, a deformed transmitter and treacherous participant. Candyman is a visceral and bloody example of the unseen power of modern myths contagiously produced and reproduced, and how the most enlightened sectors of administrative and social control (police, mental health institutions), the academic (researchers, post-doctoral studies), media (newspapers, TV) play their part in it. The anthropology and ethnography of the urban sprawl are breeding grounds for more than the specialists have bargained for. The Chicago of the 20s and 30s was a laboratory town for what has been hailed as the precursors of cultural & subcultural studies – trough the so-called Chicago School of Sociology (also called the Ecological School). Much of their early and middle 20th century studies dealt with crime rates, delinquency and the so-called social disorganization focusing on the breakdown of social control mechanisms. Cabrini-Green housing projects or The Prospects – an urban territory situated in Chicago’s Near North Side – is the place where Helen (Virginia Madsen) and her friend Bernadette hope to gather information and documentary materials on the Candyman serial killer legends.

From the very beginning both of them are mistaken as informants, as members of the police by the local residents (including the local gang members). The initial curse involved the repeated summoning of Candyman’s name 5 times in front of a mirror. The name-calling in front of the mirror is a staple of satanist and midnight hour rituals as well as horror cinematography, and what goes beyond the mirror is the social realism behind it. Behind the mirror lies a world of social housing gentrification – sold as upscale condominiums to white middle class folks. Real estate speculation is itself entering the vicious circle as cursed estate (see The Shining 1980, Poltergeist 1982). 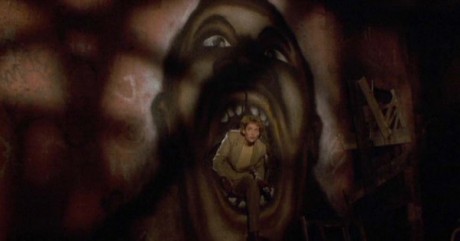 The core of the Candyman legends tells a typical American horror romantic story where son of a slave has an illicit (in view of his racial profiling) love affair with the (white) daughter of a local power player. As artist painting the portraits of the rich in Chicago he’s got access to the wealthy, but he’s not immune to racial hate. He is lynched, his hand sawed off, and then tortured and killed with bees from a near-by apiary. Slavery, segregation and future slums produce a new super hero with a hook as a hand and a furious legend. Nothing matches the images of fury and vengeful forces than a swarm of bees.  The serial killer or the vengeful ghost – already holds this central place as the new superhero of the Megalopolis. The graffiti, the abandoned and ruined apartments function like crypto- early Christian churches from the Catacombs and Candyman is in fact a new apostle with a new religion for both the exploited and the exploiters. Immortality means here becoming part of the legend, living on with the legend. Only if one gets sacrificed and murdered one is attached to the mythological circle of urban stories that are being whispered in classes and published in newspapers. 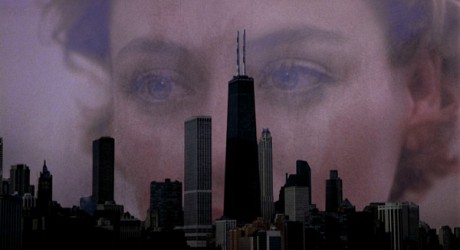 The movie starts with a beehive swarm taking over the city of Chicago. The image of the swarm is very important. There is a scene where there is a strange communion – of bees issuing forth, getting out of the ribcage of the martyr (Candyman) and into the mouth and eyes of Helen (the researcher).  The cursed stories and urban legends don’t have a fixed home (one human body, or one neighbourhood), they are pushed like angry bees, migrating from a hollow to the next. Forbidden knowledge as cursed data is stinging with a millions stings. The metensomatosis of aggregated, formulaic, additive materials searches for more ‘believers’, and especially for unbelievers. Unbelievers, the sceptics, the rational crowd are especially vulnerable to rumour and hearsay.  The new legends use specific white fears about black criminality and unsafe hoods to feed back into the apparently waterproof secular system. The graffiti on the wall – is the true writing on the wall – the walls speak of future-past. They are not only just Tags or fancy street art, they are encrypted messages to be deciphered at ones peril. Art is immediately transforming the urban legend into sacred murals. 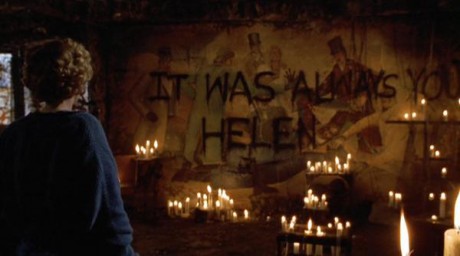 The Candyman movie uncovers a jungle of street signs that talk about revenge, curses and shouts – as omens. In fact curse and clairvoyance are indistinguishable. Curses already prescribe future events and integration into the legend. Helen gets dragged and pulled into her own story, the story starts to write her, and the more she uncovers, the more informants she has, the more she is producing her own version of it. In fact there is a total reversal in the end – the researcher (in the mirror) becomes (spoiler alarm!!) the killer, she is herself wedded to the myth. In her interviews, recordings and transcriptions she ends up teasing some of the underlying truths. The circularity of the urban legends drives her at the place of crime, at the same altar she will establish a new legend. She herself appears to be a reincarnation of Candyman’s 19th c lover – there is no accident that she is the one to research and study his tale. The apotheosis after she end on a funeral pyre – she becomes a new martyr and holy figure in the pantheon of urban protector spirits. 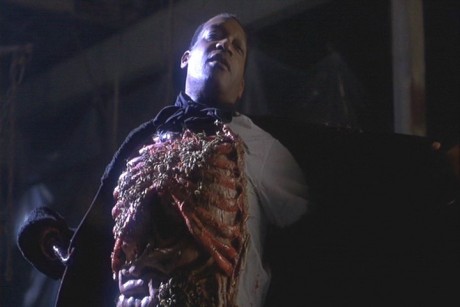