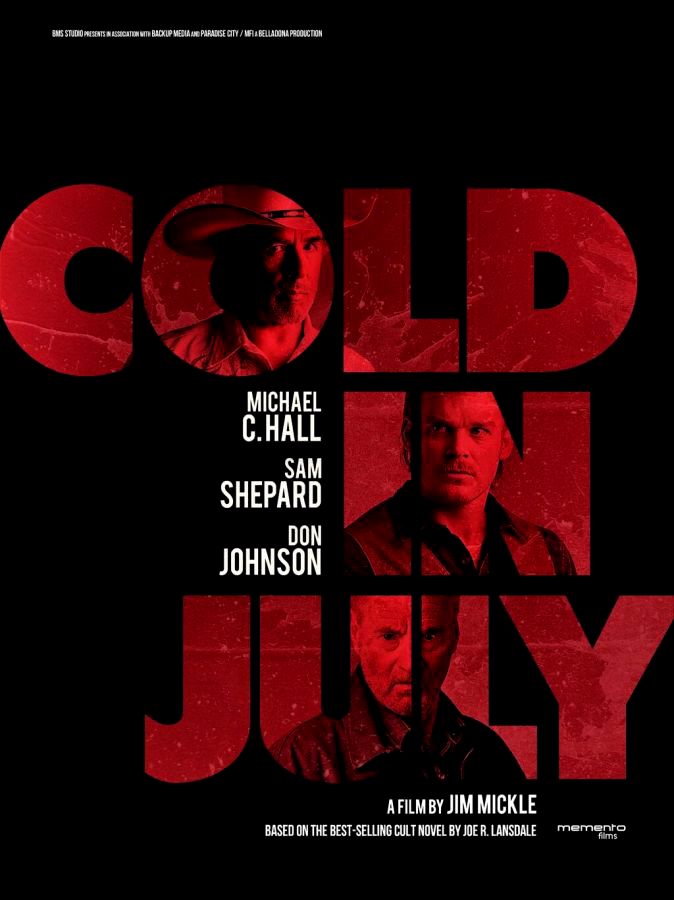 Cold in July is a 2014 American crime drama film directed by Jim Mickle, written by Mickle and Nick Damici, and starring Michael C. Hall, Sam Shepard, Don Johnson, and Nick Damici.[5][6] It is based on the novel of the same name by author Joe R. Lansdale.[7] IFC Films theatrically released the film on May 23, 2014.

Rotten Tomatoes, a review aggregator, reports that Cold in July received positive reviews from 85% of 102 critics surveyed; the average rating was 7/10. The consensus is: “Boasting plenty of twists, a suitably seedy tone, and a memorable supporting turn from Don Johnson, Cold in July proves an uncommonly rewarding thriller.”[31] Metacritic rated it 73/100 based on 30 reviews.[32] David Rooney of The Hollywood Reporter wrote, “Jim Mickle continues to show that he’s among the most distinctive genre filmmakers on the indie scene with this cracked but flavorful thriller.”[33] Kyle Smith of the New York Post called it a midnight movie that is “good, but not a scorcher”.[34] Brian Tallerico of Film Threat rated it 3.5/5 stars and wrote, “Any issues with the actual narrative fall away when one considers the risk-taking here.”[35] Andrew O’Hehir of Salon.com called it “tense, gripping, gruesome, often hilarious, brilliantly engineered and highly satisfying.”[36] Todd Brown of Twitch Film called it “a remarkable bit of work from one of the brightest lights on the American indie scene.”[37] Rodrigo Perez of Indiewire wrote that the film is initially irritating and contrived, but it becomes “far better than it has any right to be and perhaps, more significantly, is unusually absorbing and memorable.”[38] Scott Foundas of Varietydescribed it as “a modest, unpretentious exercise in old-fashioned thrills and chills, made with a level of care and craft that elevates it well about the fray.”[39] Stephen Holden of The New York Times called it a “pulpy neo-noir” film that “goes gleefully haywire”.[40] Betsy Sharkey of the Los Angeles Times wrote, “Tense and violent, it grabs you from the first moments and rarely loosens its hold until the last body drops.”[41] Ed Gonzalez of Slant Magazine rated it 2.5/4 stars and called it a “compulsively watchable” film that eventually “falls into a rabbit hole of tiresome plot machinations”.[42] A. A. Dowd of The A.V. Club rated it B– and wrote that it “thrillingly shuffles genres, before settling on a dumb one”.[43]