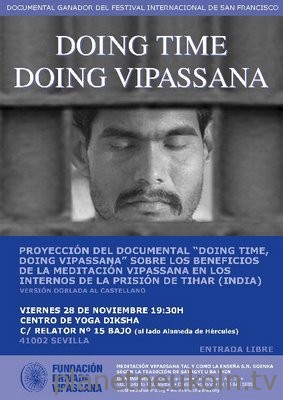 This is the story of an ancient meditation technique named Vipassana, which shows people how to take control of their lives and channel them toward their own good.It is the story of a strong woman named Kiran Bedi, the former Inspector General of Prisons in New Delhi, who strove to transform the notorious Tihar Prison and turn it into an oasis of peace. But most of all it is the story of prison inmates who underwent profound change, and who realized that incarceration is not the end but possibly a fresh start toward an improved and more positive life. These people have shown that reform can work if it is self-reform. Their success has been so dramatic that recently the Indian Government decided to apply Vipassana in all the country’s prisons. Other countries are becoming interested as well. The filmmakers spent about two weeks inside Tihar Central Prison in New Delhi and Baroda Jail in the Indian state of Gujarat… Written by Karuna Films <http://www.karunafilms.com/Dtdv/Synopsis.htm>