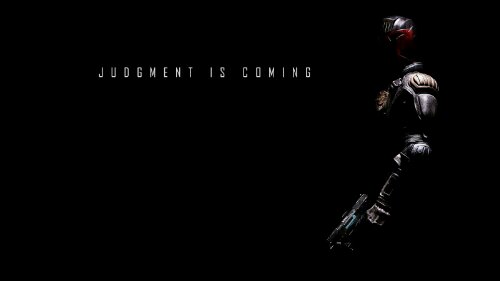 No rest for the slow

I will argue that the main purpose of Judges as principal law-enforcers in Mega City One, is the policing of the senses(apud Hito Steyerl, Empire of the senses). I am not just going to speak as the devil’s(read anti hero, criminal, sociopath of the future) advocate but try and figure out how the senses figure as the actual agents and action heroes of this comic book movie adaptation. 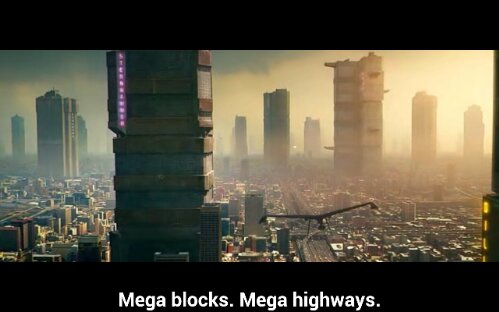 Beside the usual eviction notices to homeless persons, the Judges are basically trying to police the way people feel, see and experience the surrounding reality. 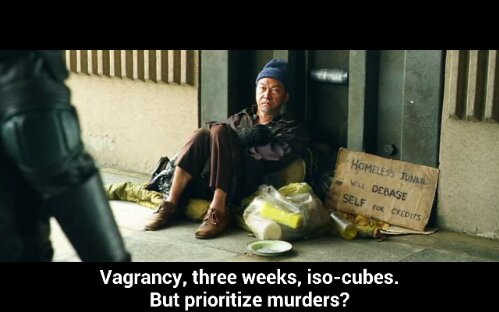 What is the mysterious narcotic of the future, this Slo-Mo that Ma-ma is distributing all over the city? First and foremost what are its perceptual characteristics, what are its effects on the viewer, and on the DREDD movie itself? Here lies a possible answer about the role of the Judges. The Judges are policing a drug that is slowing down to 1 percent the capacity of the brain to percieve time or surrounding events. Basically it is actually a drug to slowly downtempo the rush and high speed of life in the near future. If life could be said to be a suicide away, then this slowing down to the final crash becomes critical to all the citizens of Mega City. 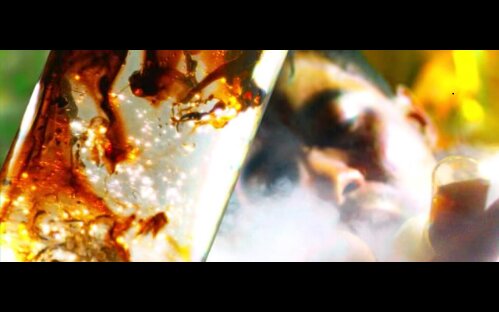 Mega City appears like a war zone, another city of the future that has virtually become a huge prison (Escape from New York). 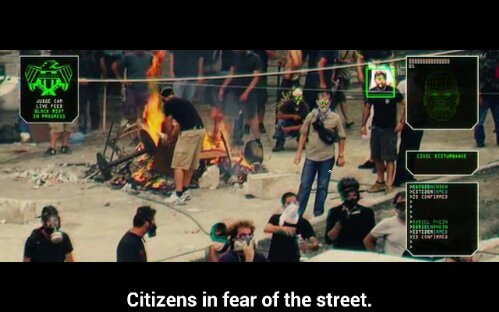 Life is described basically through the surveillance cameras, the drone recordings (one may presume) and facial recognition software. Riots, unrest etc and nobody who cares to actually explain the why and the who. 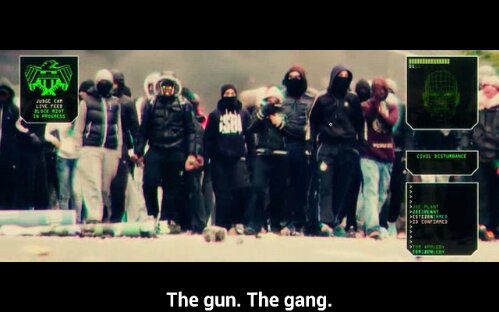 This 200 levels block where all the action takes place is and actually looks like an arena. A huge central shaft separates the four sides of the building. Dredd is basically an arcology where all the action takes place inside one such mega block. To me this mega block resembles the pit-city of The Incal comic book by Jodorowsky. Iso-cubes and recyc is also part of this biocratic future where bodies get disposed of very quickly or kept in isolation. If the dealers of perceptual slowness are to blame, then why do the speed freaks get away?

Well the explanation may lie in the fact that already today, slowing down may be considered illegal. David Graeber actually wrote about how speed is actually decreasing when it comes to the pace of innovation(average rate of scientific papers being published) first time since the Scientific Revolution, and even human transport (the fastest human manned object is still the old spacecrafts of the 60s) slowing down. If it’s not in the rush, the transport and scientific rate of innovation, where is speed happening nowadays? Well high frequency trading is probably the most likely candidate for speed increase nowadays. Relays, micro wave beams traveling trough air, buried fibre optic cables and machine – to – machine trading is constantly pushing towards latency, nearing the speed of light limit transactions. An area where quantum mechanics and relativity truly starts to financially matter. So this is how slowing down may seem like a terrorist act, a crime, a place where human intervention or human error is already considered impossible and unwanted. In fact the Judges don’t shun using the same methods of dispatching the criminals to the pit. When Ma-Ma is finally cornered, penalty is following the same discipline & punishment routine as her own – by being first drugged with slow – mo and then thrown 200 levels down the central inner shaft. The falling bodies of course will bring to mind the falling September 11 victims.
The second arena where senses are to be kept alert and on the move is special effects. 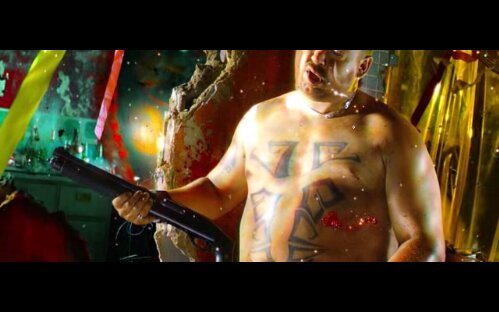 Blockbuster cinema is having an incredible quota of speed scenes, of jumps, falls and chases. That is where slowing down means literally more and more loosing money for the investors. Most of the slow down nowadays happens mostly during video clips or advertising, the only place where everything is concentrated in a few ultra costly minutes and the place where perception is allowed to rest on the brands or the bands. And even the slo-mo drug acts as yet another enhancement on the special effects of the movie allowing an in-detail choreography of piercing, splatter& spectacular death. The slowing effects of explosions are transforming humans into crash test dummies.
Instant death or instant justice is felt as an infinite moment, a detailed panorama of how bodies react to explosions, blasts and shoot outs. As for the term itself – slowdown it reeks of economic doom and consumer slump.

The movie also advertises a whole array of lethal and non – lethal weapons, some of them in use already by law enforcement units around he world. Another salient fact is that the rookie of the duo (yes basically DREDD is a police exam movie) is a psi mutant. In a way her extra sensorial capacity allows her to see not only through the minds of the thugs, gangs and opponents but also finally through the swift system of law that is a characteristic of the Judges. In order to become a judge she needs to make use of this arbitrary on the spot decisional force or otherwise risk becoming a criminal herself. 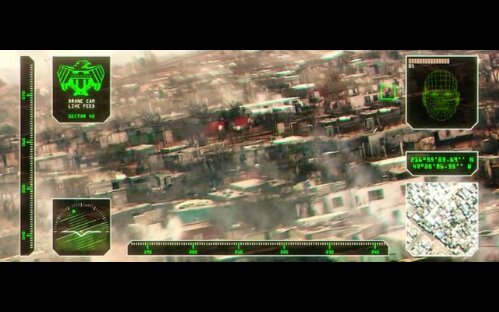 Allowing the hacker to run away is a turning point in her career, the moment she starts refusing the swift justice orders that will make her win her badge. That is also the moment when she decides to refuse and not join the force. But this happens only trough using this inter-subjective powers of vision, actually empathising with the victim. Nothing in the arsenal of the Judges will allow this profiling, only extra sensorial powers will make it possible. She is also the one who can figure out the weaknesses of the granitic Dredd. In this context it is well worth considering the name of DREDD that is quite close to dread, fear, implying that fear might be the real hero of the movie.

A final word about Ma – Ma the arch criminal of the movie, the supposedly heartless unethical, power hungry slut. Yep, the more we think about her she will appear like a total non opponent to the technologically brutal Dredd. Even when she is using the big guns she seems outgunned. So who is she really? I would say she only becomes dangerous to the Judges system of order if we realise that she is a former sex worker and a woman that has orally castrated her violent pimp master(so the police report goes). So she starts to actually look more and more like the proverbial Medusa enemy of manhood and masculine revival. 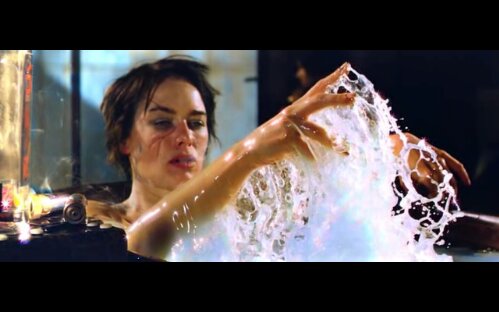 I would go as far as to suggest that the mask and headgear Dredd and most of the Judges wear acts like a sort of protection in battling this scarred but valiant woman, that is more like a pirate queen than a common criminal. She is also (in the sense of Hito Steyerl example of the thai woman killing her pimp overlord with a piece of bottle) a hero in the Empire of the senses, she is being punished principally becose she refuses to take part and stops working inside the extensive sexual floating world industry. She is killed basically because she has left the red district and because she is being made responsible for transforming the whole city into a red district. What I also find particularly revealing and puzzling at the same time is the heartbeat-synced self-destruct device she holds on her hand. This device is supposed to halt Dredd and make sure that if she gets killed – most of the upper Mega block levels and their inhabitant will get blown up.

This heartbeat device is not just a cruel, last stand, bargaining device but also a closed circuit binding together signs of life, quantified self technologies and punitive preemptive action.