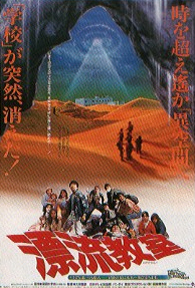 After the late rediscovery of his surreal horror classic Hausu (1977), Nobuhiko Obayashi was being considered as one of the Japan’s best kept secrets. Drifting Classroom is an unintentional monster of a movie (not just a monster movie!). Obayashi practically massacred Kazuo Umezu manga original, and along the way transformed it into a weird cult classic. The visual style is unique, great camera work, great cuts (considering) with some of the most hilarious low budget effects ever. It comes across as an unabashed VHS movie of the 80s with that strange retro 50s look due to its stilted American actors and ham dialogue. Lots of in camera effects with almost every key scene superimposed on postapocalyptic matte backgrounds. This is one of the most complete and fabulous cinematic failures, an unsolvable puzzle. It is relentlessly goes over the edge, it is a drifting movie in itself, stuck in a dimension all of its own. Chock-full of cheerfulness and sadness, hopelessness and plenty of gung-ho spirit, with plastic teenage kids displaying sub-amateur acting skills, bad accents peppering a lot of seemingly unnecessary English dialogue. In fact, I think it’s the heaviest English-dialogued Japanese movie I have watched in my life!

In contrast with the original manga story it is situated at Kobe International School(filmed there too), filled up with an incongruous, bizarre and jarring American-Japanese cast. It is a total clash (unintentional) of genres mixing horror, slapstick, musical, melodrama, pedo-teenage romance and English Lesson advertising (?!) topped by a great original score(by Joe Hisaishi). The movie also features Aiko Asano a famous Japanese idol from the period, who also released in parallel the nude album The Younger Sister of Summer. The result is one of those rare movies that was badly received both in Japan and the rest of the world. No spoilers this time, there are lots of good reviews out there for this one. First I must clarify that the monsters are actually beings from the future and they love to tear and shred to pieces young school kids. In the end these giant cockroach denizens of the future are pacified by some definitely therapeutic piano playing by one of the young school teachers that in the end also transforms into a giant cockroach. 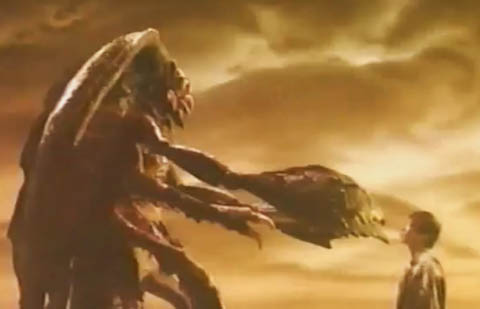 Humanity and its blattoid future is just irresistible, so I definitely give a thumbs up to this one! 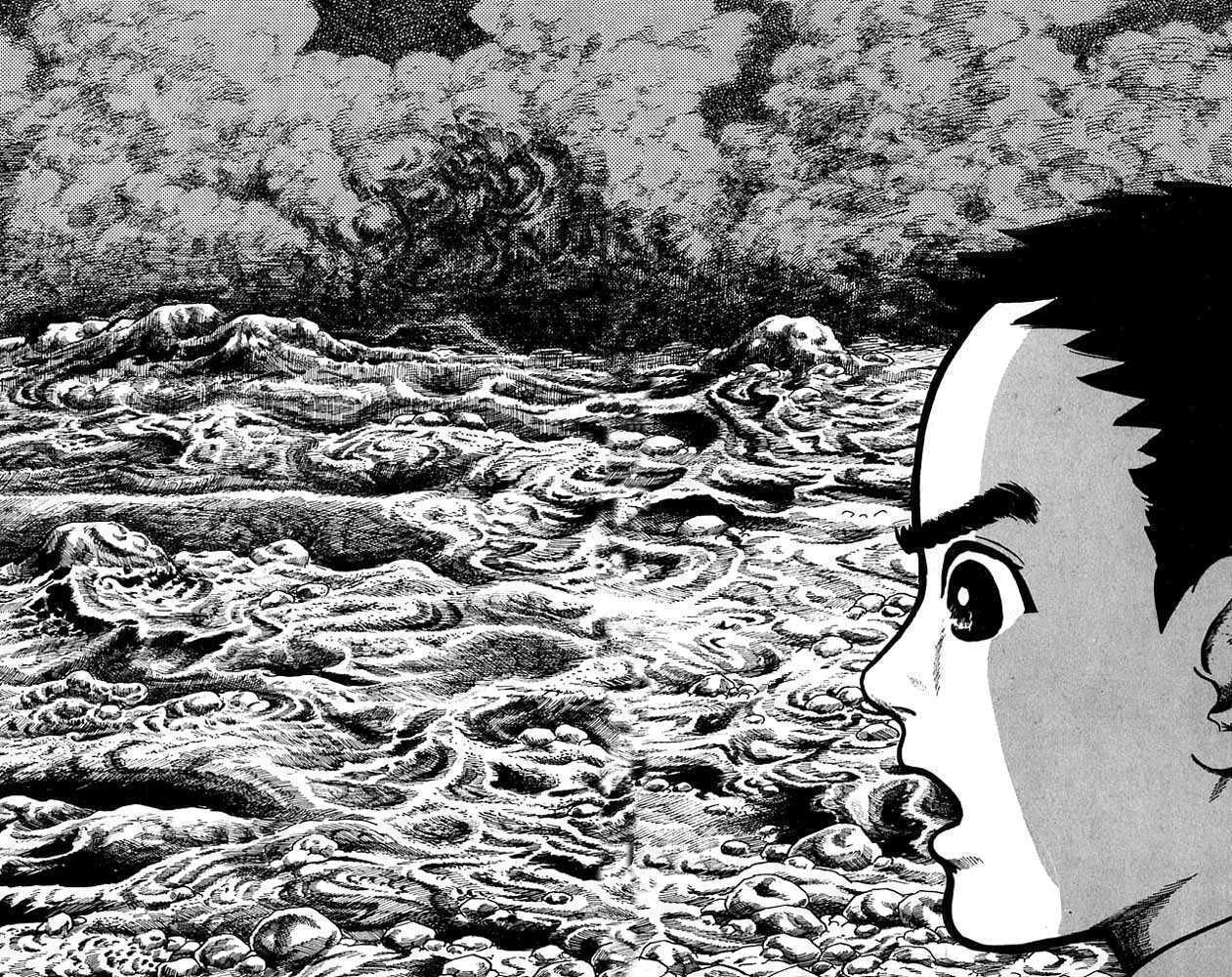 My intention was to dwell more on the movie than the manga, but the temptation was just too strong (see below). Both Obayashi and Umezu have gained International cult status years after the productions became familiar to Japan so I will use the movie to also introduce the manga. Kazuo Umezu’s Drifting Classroom manga (serialized btw 1973-1974) is probably the ultimate Dying Earth saga, when a present-day elementary school from Japan is being abducted and transported in toto to a an entropic end-point. Charlie Stross wrote a great article on the lack of cultural estrangement in SF, of a certain knee jerk reflex towards the most expedient features of the present when dealing with the far future – and here we have a work (a manga) that completely removes this degree of insulation that the human present is building around itself.

The way Kazuo is producing estrangement is also of importance, since he doesn’t basically allow any transitional stages, any step-by-step degradation of the present trough overpopulation or disease, infertility, fossil fuel or crop collapse or any of the usual 70s ecological and scarcity scares. He also doesn’t introduce any sudden disruptive and grandiose extinction event, no brutal freak climate catastrophes, no cosmic meteorite, no volcano or even no extraterrestrial invasion or makeover of planetary proportions. He does something even more remarkable if you think about it – he builds on a total chronological improbability and total time-flow inconsistency by colliding a present elementary with its non-existence in the far future. It is not the usual time travel, where the traveller meets himself in the past, but a radical jump forward when you confront your own absence in the future. Nothing can soften the realisation of your own (and everything else on this planet) nonexistence in the future. Nothing matches the rediscovery of the battered, corroded remains of their own school signpost and further more the monument dedicated to their own disappearance and annihilation in the past.
Not even one of the members of the school can recognize the planet as what it is, and only when they find the battered monument dedicated to their own disparition do they acknowledge the fact. 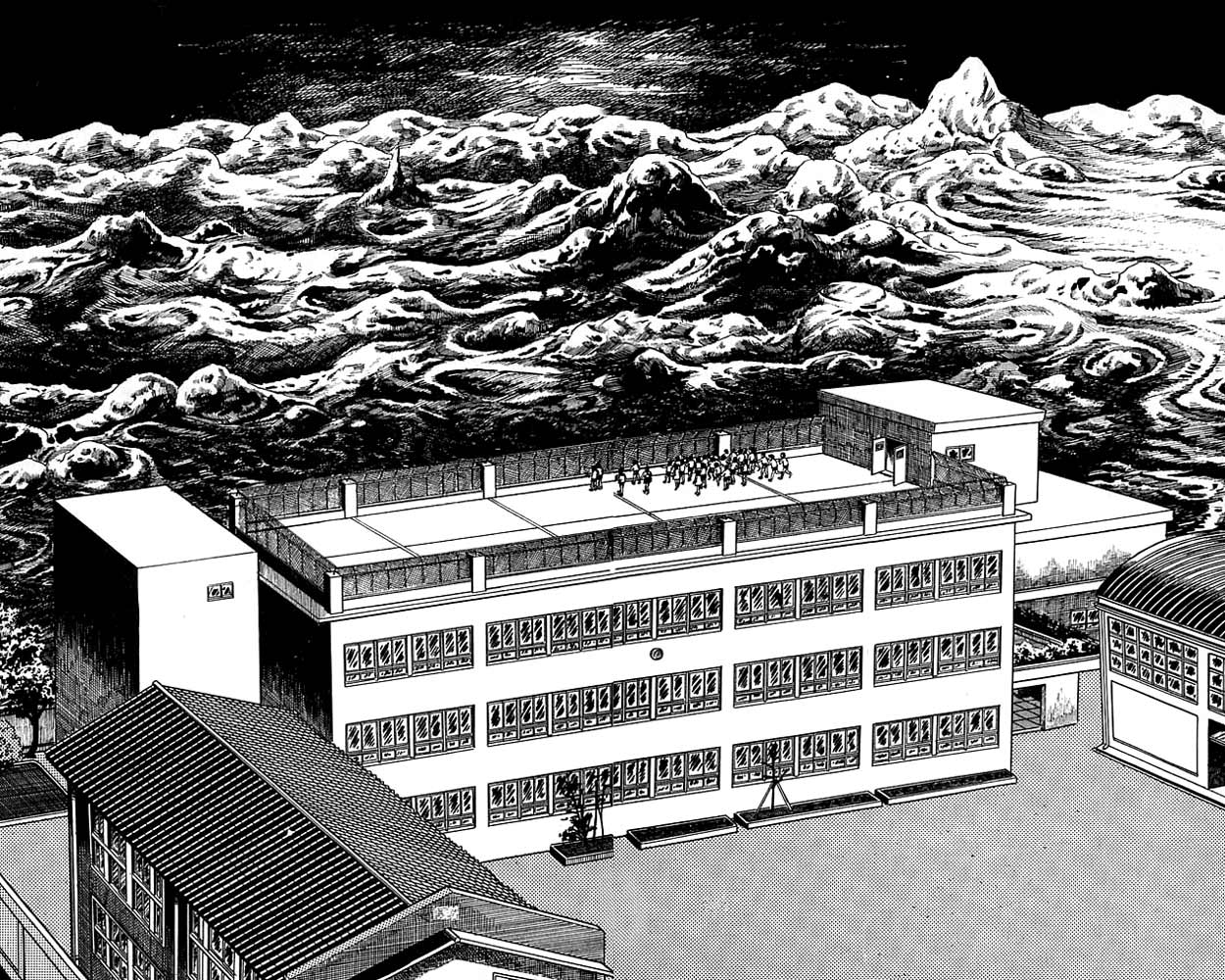 Although compared with Golding’s Lord of the Flies, the comparison goes only so far as to point out that both use insularity as an end point, and that is no accident. As I firmly believe, islands as places of isolation have always been preferred locations for utopian imaginings but also remarkable engines of evolution(such as the famous Galapagos example), time-traveling and time-drifting speciation laboratories, imaginatively and bio-culturally exploring avenues of future drift. Instead of a steady continental drift, Kazuo Umezu uproots a tiny fraction of the present world (with humans, plants and birds) and hurls it into the distant future Earth, ensuring thus that this island from the past has no way to recover its wits, to re-adapt its biological and mental apparatus or to regain and make up for its “lost” time. The present is locked down in a tightening grip of synchronicity, continental and civilizational clockworks are being continuously synced, and everything is seemingly ticking at roughly the same pace. Meeting with the Future face-to-face is in fact a form of Great Interchange in the happening! When previously isolated areas come into contact or form bridges these species Interchanges take place.

Thus, entire ecosystems or entire domains of life, isolated by historical and spatial drift are being reunited with always hard to assess chronoclysmic consequences. That is how this more or less sudden unexpected reentry to Earth ensures that estrangement will affect both sides in numerous ways. It is not that the future and the present are never meant to meet, because they cannot logically and physically coexist in the same timezone. It is rather, the sheer vastness and transformative accumulation of futural time-drift in regard to the present that will ensure that the hapless now will be vastly surpassed or outperformed.

The island of negentropy that this Japanese school represents act almost like a Lazarus taxon  exposed to vastly changed planetary wasteland, an incredibly remote landscape that has almost completely erased the remains of the past. This landscape is not so remote in fact, it basically remote only in terms of its immediate geologic semblance, the erasure of the present is a return to the initial conditions of tabula rasa planetary origin; an arid harsh climate with an atmosphere inimical to life as we know it.

Umezu also envisions the possibility that a lot of nightmarish species of the future, including the gigantic, arthropod post-invasive, swarming potential might get a big boost from ourselves. There might be a strange and disaster-prone relationship between the horrors of the future and the cerebral horrors and phobias of the human mind that nourish and breed them into existence.

The kids of the past have a harvest of future mushroom and this might also brings about a strange transformation – another wink to Lewis Carol, but also the realization that an entire ecosystems is being exchanged here for another. Humanity will be reborn in a definitely unrecognizable shape if it is to make it into the world after. Every bite and every digestion of indigestible future matter might insure exactly this new entry and acceptance of shedding off (literally) old human skins.