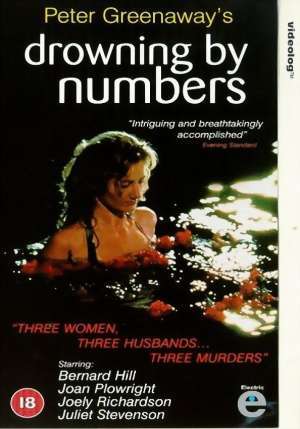 Drowning by Numbers is a 1988 British film directed by Peter Greenaway.

The film’s plot centers on three women — a grandmother, mother and daughter — each named Cissie Colpitts. As the story progresses each woman successively drowns her husband. The three Cissie Colpitts are played by Joan Plowright, Juliet Stevenson, and Joely Richardson. Bernard Hill plays the coroner Madgett, who is cajoled into covering up the three crimes. 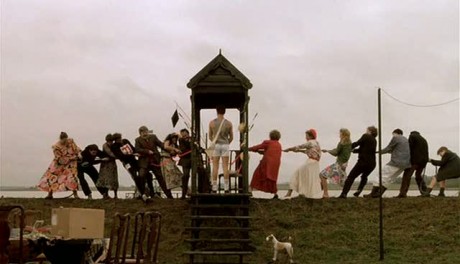 The structure, with similar stories repeated three times, is reminiscent of a fairy tale, more specifically the Billy Goats Gruff, since Madgett is constantly promised greater rewards as he tries his luck with each of the Cissies in turn. The link to folklore is further established by Madgett’s son Smut, who recites the rules of various unusual games played by the characters as if they were ancient traditions. Many of these games are invented for the film, including:

Number-counting, game rules and the plot’s repetitions are devices that emphasize structure and symmetry in Drowning by Numbers. Through the course of the film the numbers 1 to 100 appear in order, sometimes seen in the background, sometimes spoken by the characters.