Ekümenopolis: The City Without Limits (2012) 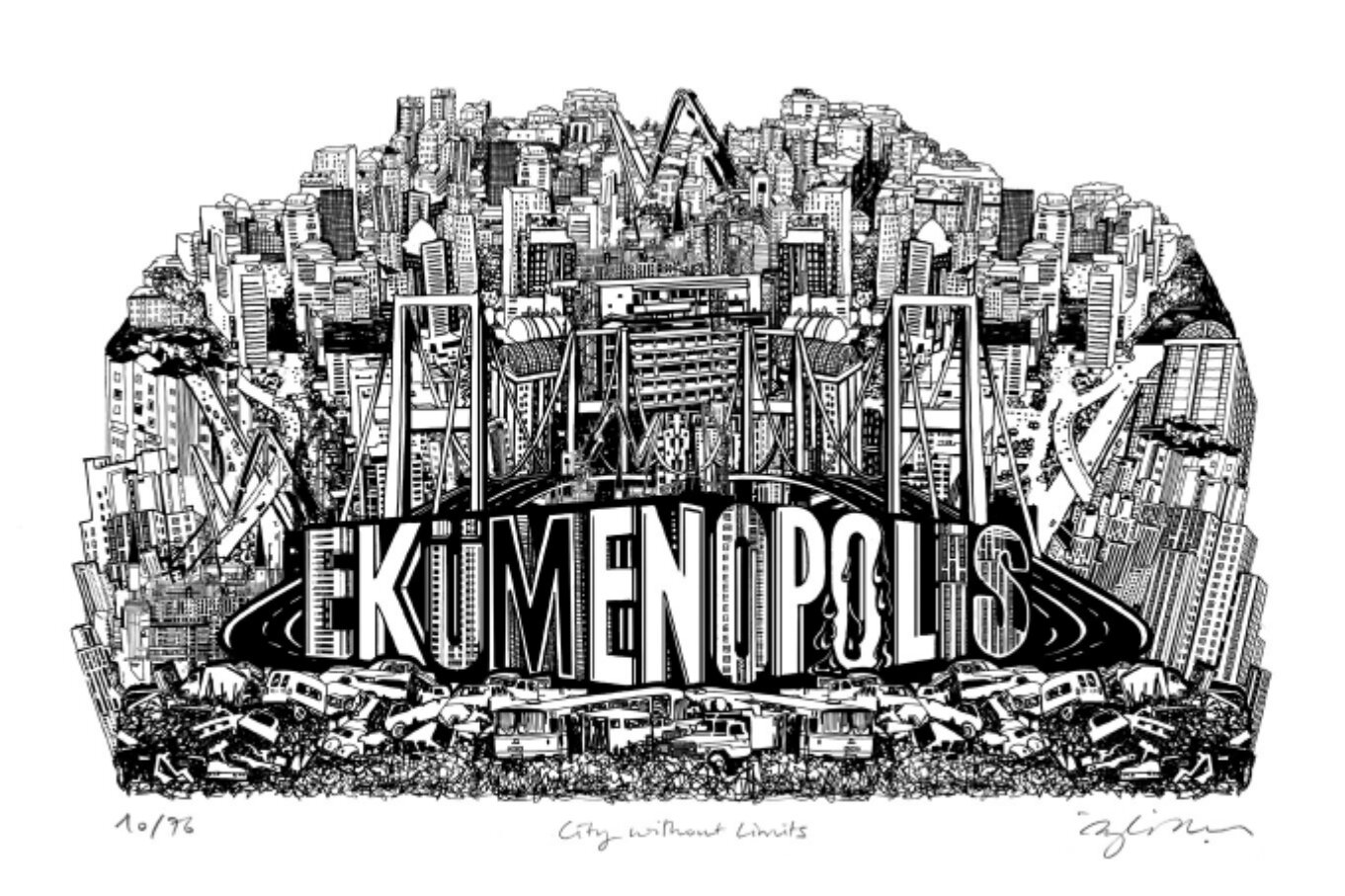 I became aware of this documentary after reading an excelent overview of the Occupy Gezi uprising written by Jay Cassano at a critical turning point for Istanbul megacity and the Turkish protestors.
This year, as part of a residency in Istanbul (together with C Cobilanschi, BMR and the Candidatura la Președinție) we lived for a month in that city. At the end of May tremendous historical events were afoot. After a short interlude in Italy, returning from the airport on the Asian side in the shuttle on top of the second of the bridges across the Bosphorus, it seemed that the city was under siege. Everybody on the bus was on Twitter, feverishly checking the stand on occupy Gezi hashtags. At the Venice Bienale the Turkish pavilion had a simple handwritten notice saying – ISTANBUL RESIST. But I was never prepared for the incredible mass movement and urban warfare happening inside the city. I could give you the exact personal expercience, the unifying effect of living under the same cloud produced by the chemical-biopolitical regime of tear gas warfare, suffocating everybody that wasn’t geared up, the thousand balcony polyrhythms resonating and celebrating the legitimacy of the protests and the exuberance and sheer physicality of living and sleeping overnight in the Gezi Park amidst thousands of people camping, dancing and enjoying a new sensual and comunal livinghood that seems to be excluded from most our city life experience. They seemed to produce abundantly an all embracing differential space at that very point were abstract space was making the harsh rules. What seems to be a general rule is that politicians are afraid of gathering bodies whenever these bodies are not called upon to vote or don’t show support for their own faulty decisions.

Instead, this documentary is not a limited personal experience or even just a localized, contextual story of hyper-urbanisation in a 15 million city situated at the crossroads of Asia and Europe. It is the systemic, symptomatic scenario of future earth ekümenopolises – a term coined by greek urban planner Constantinos Doxiadis in the 60s to define planet or continent wide megacities. This is not only about preparing for a Corruscant Earth, but about the enforced investment and dangerous failure of a global city paradigm. The global city has been the major causey seems for most urban sprawl developments, predatory practices and continuous evictions the city dynamic suffers from. Not only remote geography/geology is the target of resource exploitation by global capital (like in the Roșia Montana Gabriel Resources case) but the proximate, close urban spatial(public space?!) resources of the city are a recurring target.
And here I want to make a point that Lefebvre was making maybe when he recognized the commodification of nature enjoyment and the way the right (what he called the pseudo- right) to nature displaces the right to the city. Leisure was increasingly taking place in an after-nature scenography and cities where in turn abandoned as rotting, consumed and deteriorated husks. Consuming a marketable nature at leisure outside the city became more and more the preserve of the privileged in parallel with the ideological disengagement with the issues of the city. This is what Lefebvre ‘pleasure ghetto’ thinks is an essentially escapist and isolationist position. The right to the city is then never just a throwback at older, more humane forms of urbanity, but an engagement with the new, current forms of all-consuming sprawl.
The Istanbul city metastasis thrives by both engulfing former (outside) green areas, clean water and preserves in the forested north or digesting the last (inside) remaining green parks and old cultural centers at its core. I sadly missed out seeing this documentary while in Istanbul, a movie which seems to be seminal for the right to the city Istanbul movement and that completly sold out on Istiklal Street cinemas. Nevertheless, even now I consider it essential for future city survival tactics, for understanding the forces and chaos capitalism that are churning and shaking our cities and shaping their future expansion as well as ways to intervene and act. Istanbul seems a prototype for these cities growing mostly because of overhead planing, only because politicians actually and systematically embrace global economic directives, ignoring not only the voices of the migrant worker communities but also the good sense and advice of professional urbanists, urban planing councils, architects and social workers. Democratic processes are being twisted and the majority vote is being used against the majority. People have gathered for prostest initially against the abusive construction of a Ottoman style Mall(no it’s not a joke – it’s an attempt to marry ubiquitous neoliberal consumer habits with mainstream national cultural traits) that would have cannibalized both an important Park and a cultural center. Both cultural and environmental highlights as well as shanty towns seem to be the sacrificial ground most easily identified by current entrepreneurship and investors as unprofitable and thus ripe for new development. After thriving on cheap labor and migrant workers, the city under a massive, home ownership- or global city paradigm driven construction bubble is basically brutally recycling and abusively appropriating all the makeshift historical settlements that made development possible in the first place.
There is also a completion between natural surroundings being simulated as a poor substitute for forced displacement. This competition is driving the selective ‘greening’ of devastated environments by just a quick makeover inside 3d CAD rendering, parks having car parks underneath and a well kept golfcourse lawn standing for a healthy living. Actually nowadays anthropology and sociology have a new name for all these evacuated populations – IDPs or Internally Displaced Persons, those that are immediately sacrificed and moved in the event of a new highway, a stadium, a gold mine, a dam, new starline hotels (or for the Romanian Cluj case – a theological seminary).

An important key figure for the right to the city then and now is the theoretical work of French Marxist sociologist Henri Lefebvre’s The (social) Production of Space and Right to the City that are bound to become more and more relevant for us as time passes. One of the most important critics of both traditional structuralist economics and oldskool orthodox Marxism or Stalinist urbanism, he is a major rejuvenating force and influence for both the situationists and current occupy movements.
Here for starters:
Review of The Production of Space
critical appraisal of Right to the city in the light of agambian genealogy of human rights.

On the topic of spherology, weaponizing climatization, atmospheric biopolitics, Gasterrorism and living together as the environment where the political management of populations takes place as the possibility of life’s own annihilation – check out this revealing article: Caught in the Cloud: The Biopolitics of Tear Gas Warfare by Philippe Theophanidis.