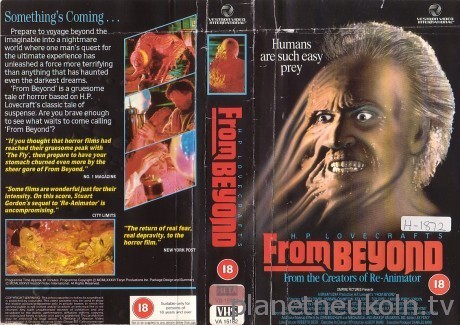 From Beyond is a 1986 American science fiction/ body horror film directed by Stuart Gordon, loosely based on the short story of the same title by H. P. Lovecraft, and was written by Dennis Paoli, Gordon and Brian Yuzna. The film stars Jeffrey Combs, Barbara Crampton, Ken Foree and Ted Sorel.

From Beyond centers around a pair of scientists attempting to stimulate the pineal gland with a device called The Resonator. An unforeseen result of their experiments is the ability to perceive creatures from another dimension that proceed to drag the head scientist into their world, who returns as a grotesque shape-changing monster and preys upon the others at the laboratory.

From Beyond was shot in Italy with an Italian crew in order to save money. Gordon says that the film would have cost fifteen million dollars to make in the United States, whereas the foreign production enabled him to hold costs to approximately two and a half million dollars.[2] It was shot on a soundstage called Dinocitta just outside of Rome.[3] Dinocitta was originally constructed by Dino DeLaurentiis, but was seized by the government for nonpayment of taxes, and then sold to Empire Studios.[3] From Beyond was one of the first films shot at that venue during its period of ownership by Empire.[3]

As with his earlier film Re-Animator, Gordon made use of medical advisors to be sure that the actions taken by the doctors and nurses of the film followed proper medical procedures.[4]

According to Gordon, securing an “R” rating from the MPAA was a challenging ordeal. He quotes them as initially saying his presented cut of the film had “ten times too much of everything”.[2] He was ultimately able to get away with making small trims, and without removing any entire sequences from the film.[2]

I have to say that this one here is one of my favorite Horror/Sci-Fi flicks ever made. It has that lovecraft vibe/twist