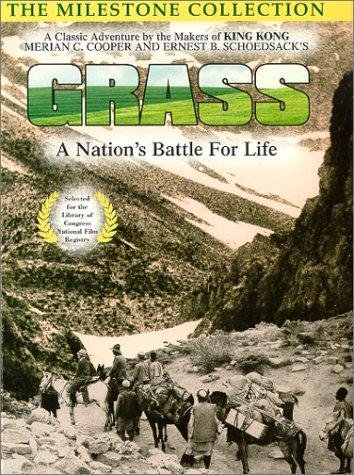 Grass: A Nation’s Battle for Life (1925) is a silent documentary film which follows a branch of the Bakhtiari tribe of Persia (today Iran) as they and their herds make their seasonal journey to better pastures. It is considered one of the earliest ethnographic documentary films. It was written by Richard Carver and Terry Ramsaye.

The film is Merian C. Cooper, Ernest Schoedsack, and Marguerite Harrison’s documentation of their journey from Angora (modern-day Ankara, Turkey) to the Bakhtiari lands of western Iran, in what is now the western part of Chaharmahal and Bakhtiari Province and the eastern part of Khuzestan. They then follow Haidar Khan as he leads 50,000 of his people and countless animals on a harrowing trek across the Karun River and over Zard Kuh, the highest peak in the Zagros Mountains. In filming the journey, Cooper, Schoedsack, and Harrison became the first Westerners to make the migration with the Bakhtiari.

The film highlights the extreme hardships faced by nomadic peoples, as well as the bravery and ingenuity of the Bakhtiari. At the same time, the film is also a reflection of the context out of which it emerged, that of Hollywood in the 1920s. Having heard about the success of the first (commonly assumed) ethnographic documentary Nanook of the North, Cooper and Schoedsack set out for their own real life adventure. Like Nanook, the central concern of Grass is to present primordial human struggle with harsh environments. The filmmakers attempt to document “timeless” and “ancient” human struggles, still observable in this part of the oriental world. The film has an engaging but deeply Orientalist tone in presenting the Bakhtiari as unchanging and archaic.

The documentary presents the filmmakers’ travel as a narrative of a return to an ancient past: they turn the pages of history backwards until they get to “the very first page”. Therefore what they present to the audience in the documentary is not a culture in the present, but a culture of the past. Mention is made of a sort of genealogical quest for so-called Aryan origins of 3000 years ago, calling the Bakhtiari, “the Forgotten People”. The film highlights migratory Anatolian and Iranian peoples as continuously in a struggle for survival: the hunter on the Taurus mountains “does not hunt for sport, he kills for food”. The film presents the annual Bakhtiari migration to Iranian highlands, where several environmental difficulties stand in the way of the tribe, which over time has developed ingenious solutions to overcome them (barefoot trail cutting over snow-covered Zard Kuh, goat-skin floats at the river crossing, etc.).

In 1997, Grass was selected for preservation in the United States National Film Registry by the Library of Congress as being “culturally, historically, or aesthetically significant”.

In 2009, author Bahman Maghsoudlou published his book “Grass: Untold Stories” detailing background information and historical references related to the making of the movie.[1]