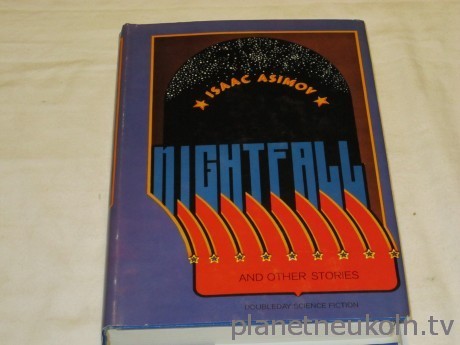 “Nightfall” is a 1941 science fiction short story by Isaac Asimov about the coming of darkness to the people of a planet ordinarily illuminated at all times on all sides. It was adapted into a novel with Robert Silverberg in 1990. The short story has been included into 48 anthologies, and has appeared in six collections of Asimov’s stories. The Science Fiction Writers of America voted “Nightfall” the best science fiction short story written prior to the 1965 establishment of the Nebula Awards, in 1968, and included it in The Science Fiction Hall of Fame Volume One, 1929-1964.

The short story was published in the September 1941 issue of Astounding Science Fiction magazine under editor John W. Campbell. It was the 32nd story by Asimov, written while he was working in his father’s candy store and studying atColumbia University. According to Asimov’s autobiography, Campbell asked Asimov to write the story after discussing with him a quotation from Ralph Waldo Emerson:

If the stars should appear one night in a thousand years, how would men believe and adore, and preserve for many generations the remembrance of the city of God which had been shown!

Campbell’s opinion to the contrary was: “I think men would go mad.” ”