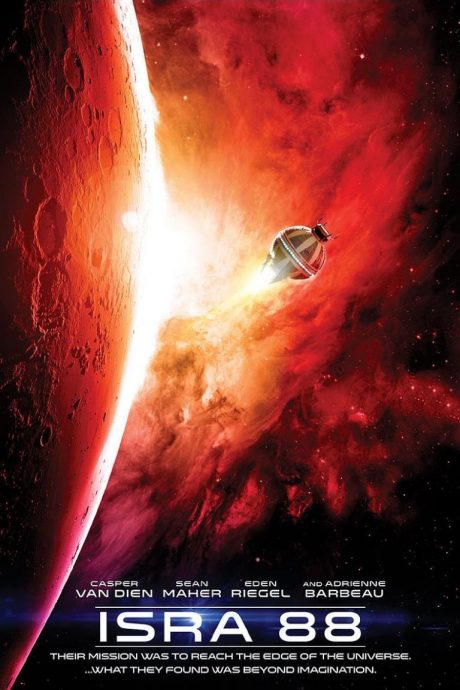 There is no lack of hyperspace travel movies nowadays. From kitschy over-designed PASSENGERS to such small and probably mostly ignored lean budgeted space-travel fictions as ISRA 88. Featuring a cast of two – a marvelous Lt. Col. Casper van Dien (Starship Troopers, Thrill Seekers) blunt & uniquely dedicated science officer and a couch potato TV binge watching Sean Maher, makes it one of the forgotten marvels of 2016. It is a humorous take on a very serious topic – what is it like, what do you do when the travels are infinite and going back is out of the question.

With a completely overblown mission – “to reach the edge of the universe” ISRA 88 it is very much a movie about the end of boredom, of long hyperspace travel and the fact that watching again and again episodes and consuming a library of trash may be the only thing left. The plot and setting is low but carefully crafted CGI effects, so low as to appear like 90s retro piece and to actually see that there is not much beyond imagination. The heroics are completely drained out, the two buddy characters are completely ham, same time both of them are too good to be true. They are full of ticks and personal obsessions Maher with 70s shades and the Caspar v Dien dutifully feeding his creepy pet eel in her murky aquarium (going to play a gargantuan role later on).

Reaching the end of the universe means actually not being able to go out of ones own mind and body. One is prisoner of spaceship interior and of the narrow confines of the self. ISRA 88 is a welcome exercise in isolation, like some of the great movies I tried to review here (10 Cloverfield Lane, 400 Days). For most of the time the duo are basically confined to playing arcades, playing tricks to each other and watching soap operas or TV quiz shows. A pervading claustrophobic atmosphere of routine and repetitive, mind-numbing activities is all what remains for the two cosmonauts. Many Worlds and alternate universes seem to plague their existence as an aside, but in the end even that might very well feel like a prolongation of consumerist selves. ISRA 88 turn out to be a a subtle and tense sci-fi journey trough the endless swaths of the same and how small irritation can trip and ripple trough the whole mesh of time & space. It stands maybe alongside Moon or Solaris in its capacity to emit and emanate disturbing doubles, apparitions and intruding entities. The pace and the retro set design are perfect, they both match and keep the feeling that it is a timeless mission – a mission from an alternate reality where the space race didn’t end abruptly. A place where it still drifts into outer space.

Sleeping in hyperspace – and there is lots thereof, produces holes and fills the existence of the two with gaps, and confusion seems to settle in, there is always more questions that can be answered. There is also some strange experiments with bees and there is also the feeling that multiple plots coexist and some point with each other, and that the final unresolved ending is not just an authorial faux pas but part and matter of the uncanny isolationist effects of deep space. Space is the place where hallucinatory experience don’t get explained away, outer space is the place where the mind-body problem looses it’s relevance, it is the place where doubles could actually be various You’s during various alter realities as well as just explorations of a confined space: all the possible movements unfolding within a limiting environment and emptying themselves out.