I’ve been aiming to add something to this movie review since forever. The original entry/synoposis is unchanged in just in the end becose it describes the whole movie in a few sentences (for those interested in quick summary).  Lifeforce was made by Tobe Hooper (Texas Chainsaw Massacre, Poltergeist, The Mangler) when he as working at the infamous Globus-Golan studios that has enliven our youth while destroying so many promising actors and actresses careers (*as a recent incredibly funny documentary about their tremendous ambition and exploits puts it). Tobe Hooper made this incredible – very much italo-space horror I find, in the manner of Mario Bava’s Planet of the Vampires (1965). It would be way to easy to shuffle Lifeforce as just a spoof of Alien, vampire movies, shameless skin flicks and apocalyptic visions. Behind the laughable effects (zombie skeleton like vampire victims exploding in a cloud of dust if not fed) and utterly ridiculous cliche plot it definitely has something of the strangeness, seething with terrible uncontrollable forces never witnessed since God Made Me Do it. 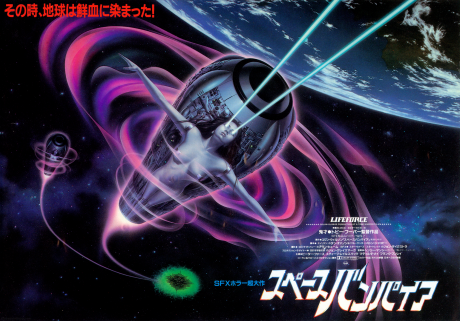 It is not an easy film, it is full of discontinuities, leaps of faith and completely open with it its sexist voyeuristic aims. I still think it’s an important movie in showing that the vampiric is not earthbound, the blood-sucking is not just a terrestrial chthonian expression of dark materialistic forces – those some forces that seem to abide, to endure all sorts of mutilations are as much part of the outside, of the starry skies. The Vampire has been always relegated to his dark Transylvanian castle, a relic of the aristocratic exploitative and superstitious elements of the society, the last remains of the past haunting the new, disinfected and efficient bourgeoisie. Well now he is place in heavens and is reawakened by curious humans hungry for contact. 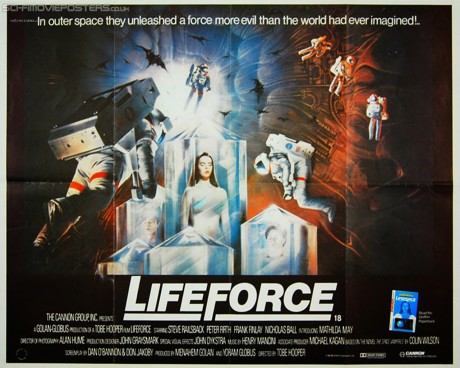 The encounter is in space inside a vessel, an alien spaceship that hosts the unexplained remains of bat-like creatures under stasis and at its core – a group of perfect bodies (men and women alike. The descent into the castle is now intimately linked with the climbing into the spaceship. The cryogenic crew, the sleeping beauties, all of them are nothing else but parasitic creatures waiting to prey on terrestrials. This extended parasitism is at stake here.  It is cosmic and it will not get so easily distracted by crucifixes and garlic.

There is also shape-shifting involved – the creatures from outer space take the allure and aesthetic of the terrestrials human hosts. They are like they just because they are ready to infiltrate all human resistance. Lifeforce is not so much about eternal life as about the negativity of life – the fact that life is incapable of death. It is incapable of a restful state, it does not extinguish itself of its own and keeps asking for more and more discharges. This life-force has a consuming quality that basically drains (not getting here into femme fatale discussion) everything it touches, transforming everything into a resources. Instead of being satiated, it infects other life with the power to exhaust bodies keeping them alive as unsatisfied shells till the end, like decrepit husks that refuse to stay still.

They can all move as skeletons, as starving pitiful creatures behind bars, in surgery rooms, complete with death-masks, shrunken (*but with incredible blue eyes!). In some obscure way somehow this draining and recharching is linked with sexuality, with attraction and with falling under the electrical spell of the other. For me it’s absolutely incredible how LIFEFORCE alien higher technology (which if sufficiently high works as magic) is completely a-technological, it is just depending on the body of the aliens (no devices, no special weapons). But it also has got a point here. You’re inside an invisible field – a Faraday cage all the time without visible hardware that sparkles and keeps on firing all around you, tracing all the attractions, suction powers and trophic chains. It is the conservation of this lifeforce that is most disturbing – it seems to never get dissipated, but only accumulated, transmitted and stolen. Lifeforce is completely exhaustive and it works by depleting everything it gets in touch with in an incredible outburst of energy trough all the orifices. What sort of lifeforce gushes out – or rather more correctly is discharged? It’s the life as conceived trough The Theology of Electricity – where bodies are just temporary receptacles that are being moved, activated or inactivated. Since the experiment of Galvani – and the origins of the first modern battery, the uncanny vitality of life as electrical spark is being transferred back into the dead (see Frankenstein) and helping rejuvenate the living (see Tesla). It also functions as cosmic event – as a comet in the sky (etymology of dis-aster -bad omen, bad star), that sparkles and seems to pierce the crystal celestial spheres and discharges its own outburst in the sublunar world. 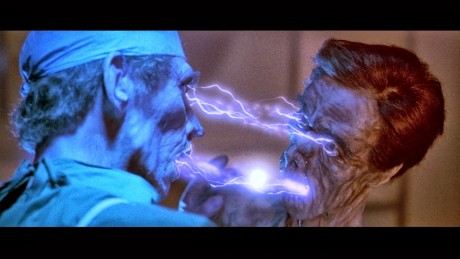 A space shuttle mission investigating Halley’s Comet brings back a malevolent race of space vampires who transform most of London’s population into zombies. The only survivor of the expedition and British authorities attempt to capture a mysterious but beautiful alien woman who appears responsible.