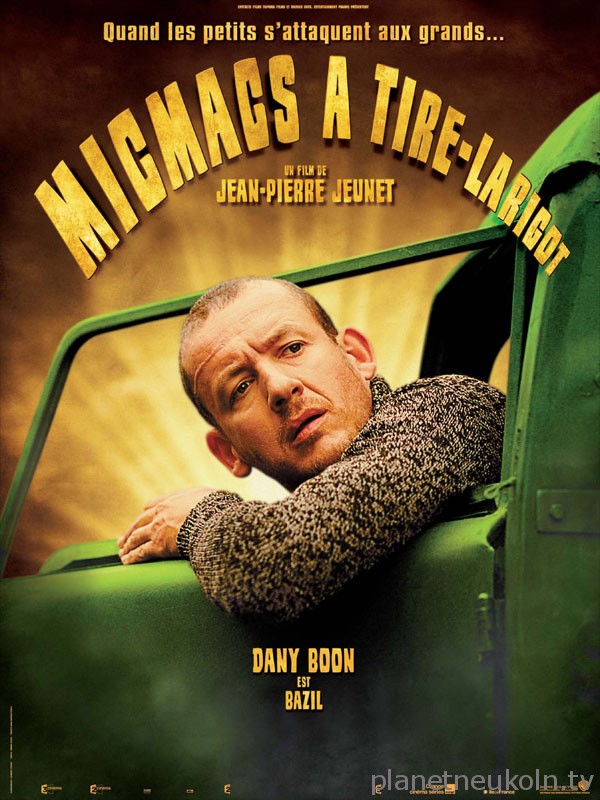 Jean-Pierre Jeunet makes movies like a mad scientist: a bit of this and a bit of that, comedy and horror, charm and madness–et voilà, an Amélie or Very Long Engagement is born. So it’s quite appropriate that the central troupe in Micmacs is an eccentric band of tinkerers, toolsmiths, and circus folk; these are Jeunet’s kind of people, and putting them together in odd combinations is his lab experiment. The “micmacs” live in a junkyard warren of their own devising, where they are joined by the film’s nominal hero, Bazil (Dany Boon), a nondescript video-store clerk whose “career” is cut short when he takes a stray bullet to the head. Surviving this irritation, Bazil vows vengeance on the city’s fat-cat arms manufacturers (as fate would have it, his father was killed by a land mine, adding extra incentive) and enlists his super-quirky band of buddies to help. Now, it is beyond question thatAmélie lovers and Jeunet fans are going to lap up this collection of Rube Goldberg gadgets and Looney Tunes-style gags, and the inkling of a social issue (or at least the little guys vs. military-industrial complex theme) will also have some appeal. But it must be recorded that prolonged exposure to Micmacs could result in tooth decay for viewers with a low tolerance for whimsy, despite its many moments of undeniable cleverness. Plan accordingly. –Robert Horton