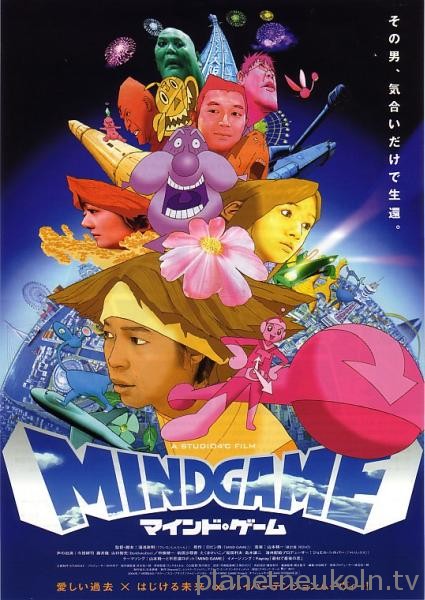 Mind Game is a 2004 Japanese animated feature film based on Robin Nishi’s Japanese comic of the same name. It was planned, produced and primarily animated by Studio 4°C and adapted and directed by Masaaki Yuasa, with chief animation direction and model sheets by Yūichirō Sueyoshi, art direction by Tōru Hishiyama and groundwork and further animation direction by Masahiko Kubo.

It is unusual among features other than anthology films in using a series of disparate visual styles to tell one continuous story. As the director commented in a Japan Times interview, “Instead of telling it serious and straight, I went for a look that was a bit wild and patchy. I think that Japanese animation fans today don’t necessarily demand something that’s so polished. You can throw different styles at them and they can still usually enjoy it.”

While a critical and financial flop in its release in Japan, the film received a cult audience and was well received, winning multiple awards worldwide, and has been praised by directors Satoshi Kon and Bill Plympton.