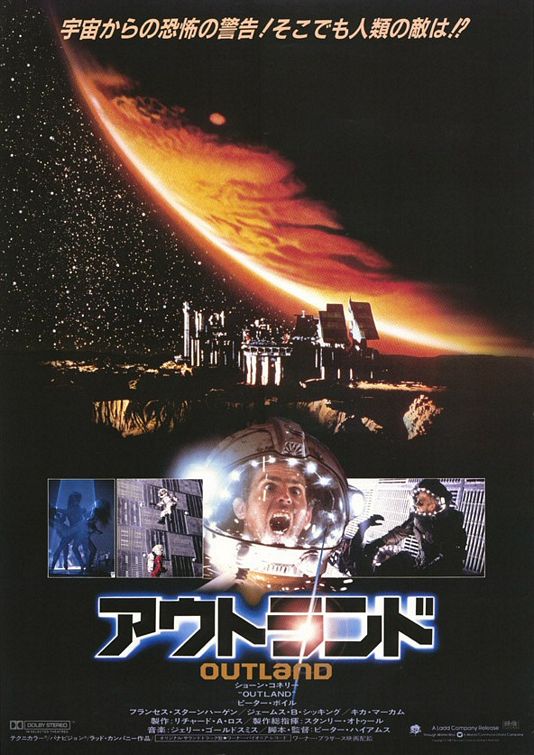 Japanese poster for OUTLAND – it does look a bit like the Ploiesti industrial plant no?

This 1981 vehicle for Sean Connery is also a pretty good space western sci-fi with a strong fanbase from what i gather from youtube. The OST is incredible, i have been sampling it and using it as ringtone, sleeping tune, and for the Tschuessi Feng radio show on PoorRelatives. It’s awesome and composed by none other than Jerry Goldsmith (Alien, Poltergeist, The Omen, Total Recall, Leviathan). It might be called an Alien-rip-off in the sense that it was riding on the fame of that movie. Compared to Alien, Outland might seem like a thoroughly Reagan-Thatcherite production. First it features a male hero, a law-maker, a kind of Marshall-sheriff, a loner (nobody wants to side with him), a typical wild west character. This makes this whole space exploration and early Sci-Fi tradition into a sort of extension of the American Frontier theory, already articulated by American historians at the end of the 19th century, when the actual frontier was closing. During the Reagan-Thatcher neocon pact, movies where made in a reactive/reactionary strain with again fashionable male heroes (most infamous is of course Rambo First Blood) again on center stage after the 60 and 70 feminist empowerment. After the mutiny&revolt&disobedience of Ripley in Alien 1, this backlash of re-centering Manhood was being reclaimed as a necessary stand-alone in the wilderness of the forests back home (Rambo) or the outer space – the outlands. But something was going wrong and you couldn’t just blame the aliens this time!

Oke after keeping this in mind, it is important to notice that we are on very human territory after Alien. The actual “lesson” from Alien is not that obvious and usually ignored – the monster isn’t the evil alterity incarnate. The alien monster is just out there, a nonhuman among a majority of alien nonhumans. The actual and more insidious evil is the company Wyland-Yutani Corp. It is the the internal rules and missions statement that label, search and keep tracking potential monsters, taking them out of their context by exploiting their survival skills for commercial and military purposes. The mining company that owns the ship and much of the crew is part of the military-industrial complex (made visible in the recent Prometheus phenomenal viral). 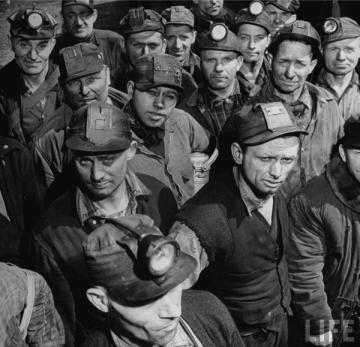 In Outland, again a huge mining conglomerate is managing the titanium ore exploitation on Jupiter moon’s Io. The law enters in direct conflict with the financial, profit-pushing politics of the Company – which i have to say where the immediate outcome of the real-world politics of the day. The UK was dismantling and destroying during the 80s most of the negotiating power held by the miners and mining unions as well as the industries themselves (the famous UK miners’ strike 1984-1985). Sounds familiar no? I have to say, on a personal note, that during the 80s it was one of the first Sci-fi movies i have seen in Romania on the big screen in some obscure local movie theatre, maybe during a US movie industry show organized by the US Cultural Center (yeah at Patria Cinema in Bucharest they even organized one of those strange cold war links during the Communist times). This show with huge cues, also had some of the first gimmicks and tech novelty shows that i remember seeing – for example a screw hologram and a blue screen stage where you could pretend to be the US President speaking live – it was the age of the VR, of media tele-com expansion and the start of videocracy, that was pushing at the doors of second world Romania. Anyway the most disturbing scene by far was the amok scene, they i didn’t quite get at the time, i knew it involved sex, some strange substance and a guy – a violent man going psychotic with a woman, in a sort of darkside psychedelia. 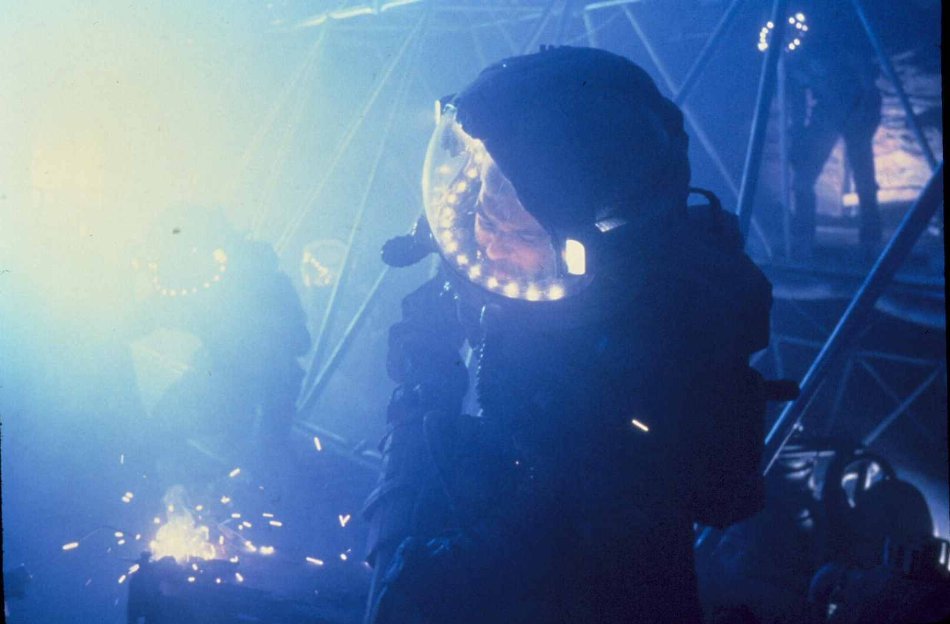 It is important to focus in the movie also on the way people, workers, miners and their bodies and minds are being disposed off. How they are in turn pushed to the limits of efficiency and ultimately death. The body horror present in the film is actually just putting into effect this. The bodies are being pressured from the inside in and are collapsing, exploding under pressures that are more financial than space-derived. The mining colony on the moon Io is a model colony – it’s got the highest productivity rate of any other colony of the conglomerate. But all comes at an entertainment cost. Apparently in such a non-protected and non-regulated company environment – fun comes at the cost. It has got an incredible large rate of suicides among the workers. Now lets go to the present in China – the Foxconn suicides. Foxconn is a major manufacturer for big fatcat companies: Apple, Nintendo, Dell, Motorola, Nokia, HP and Sony. The Chinese CCTV official reaction was a melodramatic but disturbing assessment of young workers caught in the youthful emo insecurities – which of course is pure BS. In the same time 20 Chinese Universities have labeled the Foxconn factories as labor camps.

Outland is not only a space western sci-fi about a outer world mining town. It is a movie that equates free time with the need to work hard and to party hard. It is not the usual drugs in the street story, pimped in bad neighborhoods. To be productive in the capitalist solar system, to be true company Stahanov miners, the workers need enhancers that keep them on top. These are not your usual incentives. We are talking molecular pharma incentives. This isn’t the moralistic tale about weak people and drug use – it is more about stuff that hardly shows in the medical tests or that seems so new as to defy easy molecular analysis. To be tough, to be competitive and to keep the body ready, one needs to change the chemistry and behavioral patterns. This isn’t such a remote theme after all, but Outland makes it clear that the company managers don’t have any problem with that, in fact they consider it essential to their good fortune and enterprise. They try everything to keep anybody from interfering and keeping them accountable for what ‘s going on. Please don’t mind the final line with the family coming together and the wife getting all the blame for leaving (Sean Connery) the husband and not understanding the urgency and dedication – or maybe mind it, and see how it squares with the other parts of the film. This more conservative undertone actually makes the Marshall the only family guy around, he’s the autotelic knight, and all the miners away from home and family preservation and protection – as prey for the powerful. Outch!

THX: to Cosima for the Foxconn TV youtube, Mimi and Iv who kept this no frills movie spoiler BBS alive 😉 and make sure you go and see the UnderEarth Theatre about the changes affecting the livesdeaths of the Romanian miners in the 90s and their struggles ( a show coordinated by Mihaela Michailov, Vlad Petri, David Schwartz)