Parallels is a recent sci-fi movie based on a story by Leona and Laura Harkom. It is by all means a minor movie, maybe the least one to attract attention or enter the competition for the most innovative indie science fiction movie of the year. Nevertheless, I want to thank V Leac for pointing this one out to me. You might hate this movie just because it is a pseudo-teaser, because it doesn’t deliver what it promises. It would be immediately repulsive for those who seek a finished product, a rounded up story or a  foolproof universe (*like the Matrix universe?). Otherwise its elliptic nature, full of gaps and holes is precisely what makes it work. It is itself ensconced within the could-have-been sci-fi series and what-if cinematic or post-cinematic hyperspace. 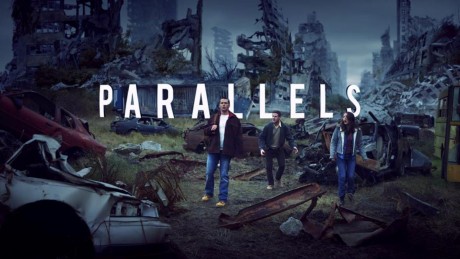 Picking up on David Wittenberg’s new book (which I haven’t read), I think that if time travel  fiction is an essential environment for thought experiments, then the so-called multiverse/parallel universes fiction is even more so. In his words time machines are not implausible imaginary devices but very literal narratologic “laboratories” or “vehicles” for traveling and navigating not only in space-time but of the phase-space of story-telling in general. This very popularity (in the sense that it gets discussed in the subway, on TV or recent bestsellers and not limited to scientific or strictly specialized knowledge) makes it a multi-use tool in exploring sophisticated (philosophic?) questions regarding identity, subjectivity, point-of-view, history and agency. In one of this screenshots, the ‘building’ sits at the center of a cataclysmic aftermath, IT is the only unchanged structure – reflecting (and absorbing?) the ruined, collapsed images of ruined remains all around it. Make no mistake – this is the image of the Former East as we know it today. Or a NY with everything smashed except of the Wall Street (Too-Big-To-Fail bailout) sector. Not only we are able to access two different alternate Earths at the same time, we also see how something can exist (and thrive?) in the midst of total collapse, of increased entropic blow-back. For me it was also a (laboratory) tool  to help us think about the incredible teleportation, shapeshifting and thermodynamic reinvention of late capitalism, of multinational and multi-dimensional expansion, of probabilities and parallel universes constantly paralleling & trumping planetary risk assessment, worst case scenarios or DEFCON situations. 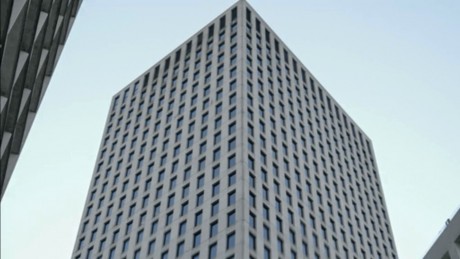 Parallels was supposed to be a pilot for a future series which never got made. It is in itself its own literal example of something that could have been but never was. At its center, from the very beginning looms a mysterious building, a sort of average office building in the international architecture style that makes it difficult to localize exactly. I am interested in why is there this building in particular and none other that becomes the portal, the hub of the multiverse. Architecturally speaking, mansions and gothic manors have been the entry into the netherworld, but the old industrial era fear of old inheritance and diseased blood lines has been finally supplanted by something else. This particular building is an example of the postmodern monotonous glass and steel style that could well be one of those faceless headquarters dotting the business centers from Kuala Lumpur to Berlin and Chicago. It is also the direct visible manifestation of financial speculation, money injections and real estate bubbles, that inject and suck out investments leaving behind infrastructural skeletons, capitalism shedding the shells of its previous lives. Shells that were maybe never inhabited in a proper sense, that were never rented out but only showing signs of rent-ability (“FOR RENT”), littering the world as pure potentialities that were never actualized. In a previous post about comedy-horror The Tower 1993 TV I chose another movie that had a hellish corporate inhuman building at its center, that was literally squeezing its employees to death.  Its efficiency was its ability to redirect all human endeavor into a smart environment vacuum – an environment designed to extract value and impose multi-tasking in lockstep.  Not the human travelers, the heroes and heroines are the most interesting characters of the Parallels movie –  but the unchanged building that is the only fix point in this constantly changing universe, the building that IS THE PORTAL. I am not very sure how precisely or exactly does this building from Parallels fit into today’s derivatives and futures financial instruments, but I am willing to try a guess. 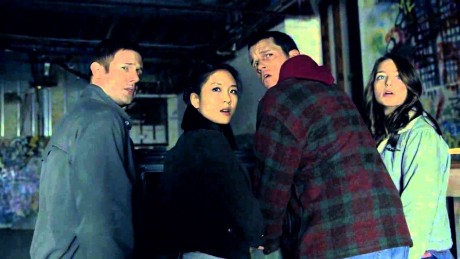 This building is itself an incredible instrument made by the mysterious ones from the “Core World” – we don’t know who they are, and it’s the quest for this ideal but very dangerous place – core world – that drives the whole movie. This building is itself indestructible, even if apparently abandoned or unused. All artefacts from the Core World are miraculous. Like the incredible sci-fi thriller “The Thirteenth Floor” (1999) based on the Fassbinder’s Welt am Draht (World on a Wire 1973), a building has its secrets and actually becomes a place of world-within-world, a non-place where reality curbs back on itself, where the mesh of the real unwinds. Its upper floors are literally inaccessible, from the point of view of the script, the characters, as well as for us the spectators, they are off limits. The building is a hub that links all the branching universes, all the alternate Earths with each other. It basically is the only stable environment in a world of total flux, where places of transit (non-places that Marc Auge 1995 is identifying) become themselves inhabitable, where subways, traffic jams, airports, supermarkets are becoming an ultimate home for all of us. Perfectly sound from outside, abandoned and full with graffiti but still functional business tower on the inside is such a non-place where the boom & bust cycles are nearly coinciding, we might say even are one and the same, becoming fused. In his Cinema volume Deleuze calls such spaces “deconnected” (after Shaviro), decontextualized places that can be connected to any other point – “any-space-whatever” are locations or positions which coexist independently of their temporal order or from one another. This temporal deconnection (Shaviro in Post-Cinematic Affect when he discusses Boarding Gate by Olivier Assayas dwells in detail on this) enables this slide between the various Earths possible in a sense. Like the perpetual unchanged default state of the Matrix universe blocked somewhere at the end of the peak capitalism of the 20th or the beginning of the 21th century – the financial center building signals that all Earths are now bound and articulated trough this same constant. The constant is this unavoidable period of nascent neoliberalism that has basically ended history, that has drowned everything in an intense wave of globalization and deregulation since the 80s. In a sense the infinite (but never achieved or always postponed) potentiality of transnational investment has managed to link up these spaces wherever they are and however they happen to appear or disappear. There is also a darker truth concerning the building in the Parallels movie – it is also an omen, a portal that brings forth doom for certain Earths. Even if the spectrum of Earths explored in this pilot is relatively small we have basically two optional planets – a post-apocalyptic one and one that is definitely more developed than ours (but in the same vein and as profit-oriented if not even more than ours). In one of this Earth, somebody (an important figure in the overall story) appears to have smuggled across dimensions/across universes some atomic device, changing the fate, altering that particular path of development. Trough the porches of this building, change came, but change that become catastrophic. It is interesting why for example we somehow are over the Matrix Virtual Reality world trapped inside simulacra universe (the Holographic principle?). With Parallels we are inside the statistic phase-space, the multiplied and wildly forking pathway space, where wormholes unite several equally possible outcomes that exist all at the same time. Each universe contains (or not) differing varieties of you, different identities and different life paths, each with its own causal chains, each with its own butterfly effects. Just take time to think a bit about a world where the September 11 didn’t happen, or a world where it happened with slightly different changes. Of course there is also the real possibility of early 21th century that apparently big decisions have flattened out – such as finishing or not finishing university, today might become less and less relevant for us. 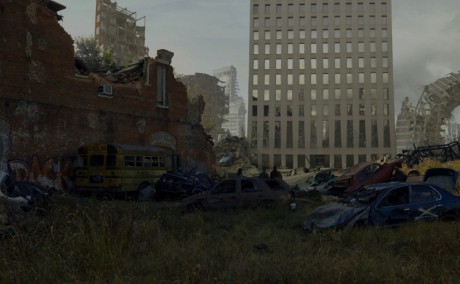 While it is always the same, no matter what that particular Earth is looking like, it also permits and allows outside intervention, it is a station, inter-dimensional re-router, re-routing people (sometimes several versions of them) to other places, maybe always different ones. With a clockwork exactitude it is switching, “jumping” universe, from one alternate Earth to the next. It is also a place of survival, one has to have a general knowledge of how to act and how to escape detection (as stranger, as exo-Earth, other-Earth citizen). Detection always has bad personal consequences, as it basically brings you close to the paradox of not belonging, of getting lost into that particular unfamiliar reality. There are new unwritten conditions and rules that are becoming apparent as one “jumps” Earths. 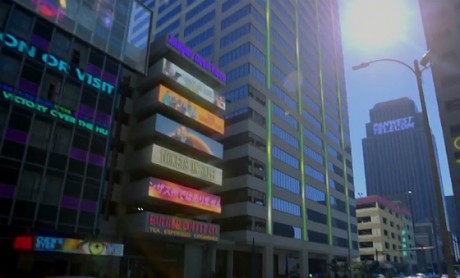 One of the nicest and very simple images in the movie – is the time the main characters start making sense of all the inscriptions and tags inside the building – they are all handwritten echoes of the various earths, people that have been transiting trough and written down their experiences. The Earths are all numerically identified “Earth 1, 2, 3.. n” and so the travelers can avoid, or can choose between these Earths like between flight destinations, choosing between worlds in  a sense. There is also something intensely touristic and voyeuristic about these various Earths, like the wish to explore and encompass all possible alternate outcomes, even if one is excluded from some of those, or even might encounter a very very bad version of oneself. But this panoptic pan-dimensional view is never possible, it is only accessible transversely. Each world follows its own rules and pathways, and they are all separate, insulated from each other. That is why the overlap is producing such unwelcome encounters. One such version is the clash btw a young lawyer, early in his career, and his alternate future self where he is a completely corrupt corporate lawyer that basically managed to have it all – the girl, the flat, the tech. It is perhaps one of the most compelling moments in the whole movie, the confrontation with your alternate self, what you will become or what you might became if following and achieving your career goals. The poor/start-up self is at this point boycotting, or maybe even denouncing his own successful self, after it finds out that all the achievements were built on blood and lies. Absolute contingency might not allow such reveries of the possible or the probable, but its immensely satisfying to try and alternate and branch out along all those parallel pathways of yourself, seeing how each excludes or survives independently of each other.