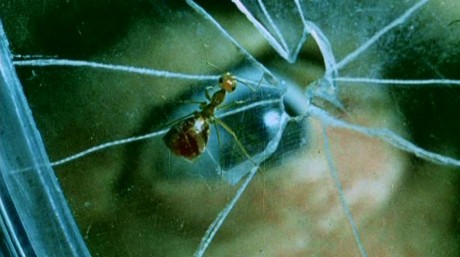 PHASE IV starts like a demo tape of biological control & invasive species, but ends up unveiling the next evolutionary step of eusocial life on earth.  PHASE IV is an incredible kult science fiction docu- /apocalyptic mocku- mentary / burnout movie with a tinge of western spaghetti dealing with hive mind dynamics, ant/human relations,  game/number theory and a general preparation for the next phase. Let’s start with a paradox: why did the incredibly talented graphic designer of logos and title sequence (he worked for Alfred Hitchcock, Otto Preminger, Billy Wilder, Stanley Kubrick and Martin Scorsese) Saul Bass leave the poster making to somebody else? Why didn’t he do the poster for his own movie (his first and only movie)? Why did he leave his movie hide beneath a total Tales From The Crypt/EC Comics kind of cover with a hand on top that has ants crawling out of wound and barely distinguishable humans running away from huge ants in a desert?

We will never know  for sure, but it’s a possible explanation of why such an abstract and beautifully filmed and cut movie – entered the Mystery Science Theatre 3000 circuit. Phase IV is certainly an early example of a response to the very real 1973 Oil Crisis that managed to spawn an entire genre of post-apocalyptic movies – plagued by dwindling resources, survivalist criminal gangs, an overpopulated and polluted earth, ecological catastrophes, possibly switching the focus from atomic or radiation disasters to something involving a more diffuse and uncontrollable  endtimes vision. It is not the simple obliteration of the A bomb, or just super powers and their leaders  annihilating each other  but something more insidious and encompassing, it is the beneficial forces of progress and industrialism, of unlimited growth and optimism combined with the arms race that are destroying the future. This is a quite different vision of destruction than the previous radioactive proliferation fears that settled on a new kind of material (radioactive isotopes, uranium etc) and the constant weaponization of daily life. 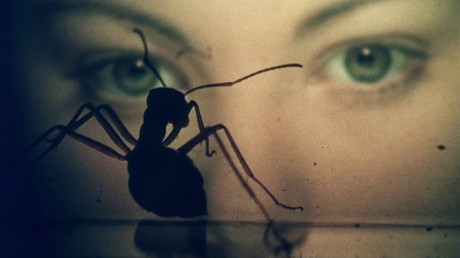 Saul Bass has produced in his only feature length movie a mind-boggling result – combining super sharp macro imagery, geometric shapes and mineral monolithic forms, cosmic flares – with a strangely static lab life environment for a few actors (not more than two or three). This set is a clean white geodesic dome situated in the middle of the desert (not filmed in an actual Upland Arizona Valley but in Kenya) and crowned with a bunch of measuring and transmission antennas. The whole movie is moving in and out of  the anthill and the state of the art research station. It is probably this intentionally and contiguous futuristic look that dominates – a dome that looks like a Mars One habitat and new type of anthill full with geometric openings and tunnels. In fact I think that is the key element that unites both (ant and human) architectures and actions – the habitat. The habitat is more than an earthly house or precise walled space with distinct limits  – it is actually closer to a space station in proximate contact with a hostile environment(the outer space) – and nowhere is this outer space station environment more closer to a extraterrestrial home than in a desert. Deserts have become places on Earth for mars-rover training, future planetary colonization and astronaut costume tests. Deserts are closest to what exists not only on mars but on other exoplanets – and so they also became this habitats of the last of last – the ultimate exemplars of a dying species or the first of the next generation after humanity becomes sand as part of the past. There is a lot to be said about the presence of the desert in Mad Max movies and their clones (apart from the very fact of their origin in the drought ridden continent of Australia) as well as the fact that much of the earth oil reserves lie in desert or semi-desert areas. 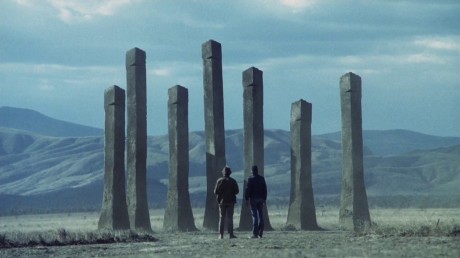 So during the whole movie – that is peppered with documentary style footage with close-ups of busy ants roving, communicating, feeding and generally playing themselves as ants – we manage to peek trough the rabbit whole, we get a view into another, neglected, subterranean world that is populated by a cryptic growing and very active super-organism. In the end there is so much more to said about the ants in their active role than humans actors that seem to be concerned with planning and fulfilling automatic tasks – much more so than the ants. There is an incredible encounter right at the start of the movie when the two scientists sent to study the new behavioural changes in these ants end up in front of the new anthills/ant skyscrapers towers. These are truly some incredible sculptural pieces – unique I think in the history of Cinema, close to the Black Monolith from Space Odyssey 2001 or really like some modernist monumental complex in the middle of nowhere. These megalithic structures are completely opaque, and real contact with the ants is seemingly impossible before their destruction(?!). From the start, humans seem to be somehow jealous of their own sentience and suspicious of anybody or anything else exhibiting it. The changes in the ant behaviour and their rise to a new level of complexity are triggered by some distant galactic event, right at the start of the movie, and this is already a sign that humans will be just spectators to the changes going on on earth. We are very far from THEM! 1954 movies when human-induced mutations have produces a giant breed of ants, because the influence is distant and very remote from human agency.  Although, this doesn’t stop the researchers treating the new hyper intelligent ants like an ordinary invasive species nuisance. Their methods include dynamite and powerful insecticides – and they go well beyond their call of duty when acting like a banal pest control unit. 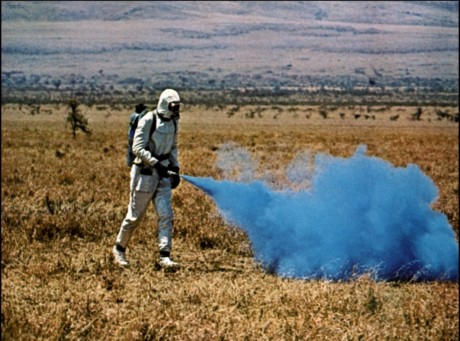 I’m afraid this movie stands alone in its detailed depictions of ant and hive intelligence, in the radical way its human protagonists start from organizing various lab tests  and end up as lab material themselves. There is always a dramatic Animal Channel/National Geographic feeling that the voices of the actors commenting on the ants are actually professional naturalists or myrmecologists, that you are listening to Sir David Attenborough or Edward O Wilson asking themselves why ants aren’t behaving as they should. There is a continuous border crossing from fiction into docu-fiction (a strong impulse in this direction is given by the phenomenal The Hellstrom Chronicle in 1971)  in a way that parallels how the ants/human action are intertwined. There is also the feeling that an alien presence is already part of our earthy atmosphere – it is actually the first movie where a crop circle is to be seen (before the crop circle spree started getting reported in the media). There is also the feeling that there is kind of NSA signal intelligence game going on at the scientific station, that they are decrypting and snooping on the ants activities. The whole ecocidal action against the much too intelligent ants turns bad when a couple of local farmers running from the imminent invasion are killed by mistake during a pest control action of the two scientists. As I said Saul Bass leaves the ants do their incredible work – basically letting them built the narrative somehow like an anthill. There is an incredible scene where successive ants pass along a piece of chemical poison (dying each time they pass the toxic piece to the next) till it reaches the splendid iridescent and winged queen ant. The queen ingests a bit of the poison to gain immunity for the next generation of larva and ants. I really love the heavy Darth Vader kind of breathing going on off-screen during its full duration. It is done very simply and evocatively – with the new eggs having the same fluorescent hue like the poison. The idea is that no matter how powerful the poison, no matter how radical the solutions, the invasive insects will always find a way to immunize themselves. There is also a scene when the language of the ants is being simulated in a sort of proto 3D video – like some pioneering work in video art, and I’m sure a lot of the video experiments going on in the 60s actually looked more like ant- or other species communication than classical art ever did. 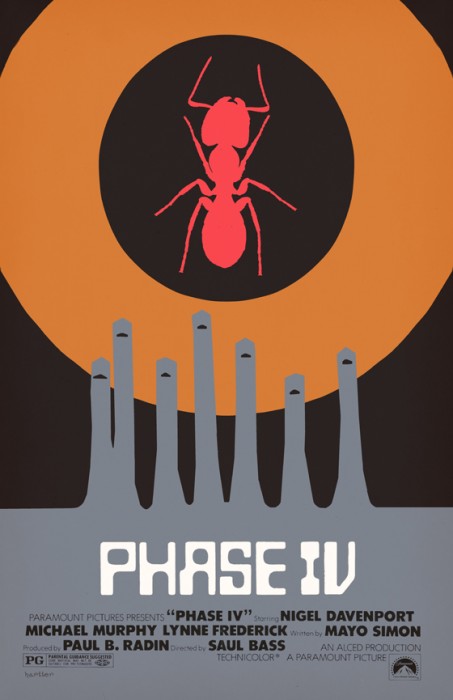 The scientists are themselves being affected by the ants – they are not the only ones chemically and acoustically inoculating the ant colony – the colony itself is being undermining the humanness of the researchers. Mainly this is the principal and hidden attack of the colony – their infiltration and subversion of humanness. After being stung by the ants their are swelling up and starting to hallucinate and slowly loose sight of their initial plans. The computer-laden station, its cooler system and circuits are surprisingly vulnerable to the constant intrusion(a bit like the invasive fire ants scrambling and affecting air traffic by their chewing on air control cables) and finally they realize (too late) that it is all an intelligence test induced by the ants. In the final scene the researcher makes it into the subterranean lair of the ants where he is actually entering the ants world through the other side of the microscope. I’ve already covered the (lost) ending of the movie elsewhere so I’ll just say that it actually describes a new anthuman life form of the future, a new transgenic phase of developement.