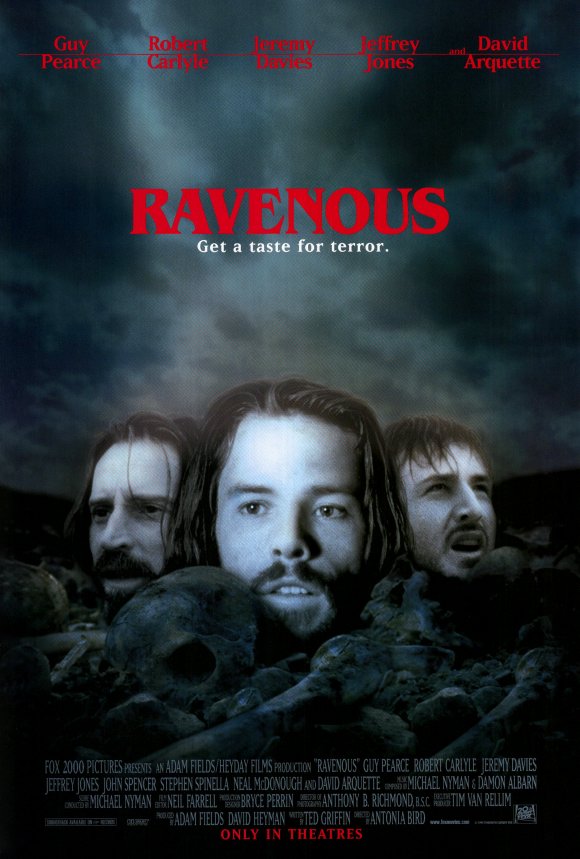 this post works as a mere reminder of a movie that is unfairly neglected, underrated if not simply forgotten. ravenous, an oddball directed by antonia bird is definitely not what you would call a crowd-pleaser. and considering its dreadful official poster, who would give this movie a second thought? but, joking aside, ravenous dwells on anthropophagy* immersed in myth and uses this theme to drive its own narrative. with some faint homoerotic bits every now and then.

to cut a long story short: 19th century soldiers are fighting in the united states army and cannibalizing everyone and everything in their quest for new riches and territories. but basically, they are just men trying to cure their own cowardice and chronic loneliness with a “diet” believed to endow the eater with the best features of the consumed one.

ravenous comes with a nervous and of-the-wall score as well (michael nyman & damon albarn) playing as an eccentric match for all the lunacy happening on screen. no doubt that cannibalism still is a abhorrent subject that has little chance to go mainstream. but tongue-in-cheek (re)viewing is highly recommended. after all, this movie doesn’t take itself too seriously. so why should you?

*maybe it’s worth mentioning here that cannibalism was used to diabolize colonized people and well, this is far from being a simple coincidence.