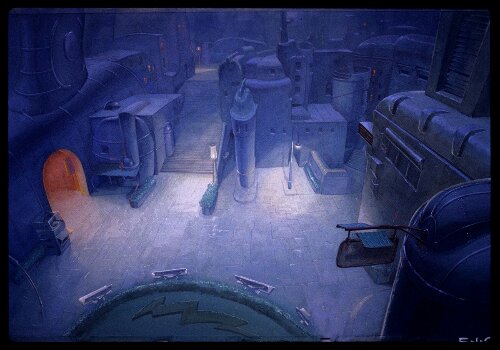 Just decided to blog about a few cult 80s animations that you might have missed. Fans of Heavy Metal should really dig after Rock n Rule. And not only because the Canadian studio Nelvana really got involved in the initial Heavy Metal melting pot. These drawings are the cleaned-up backgrounds made by Peter Moehrle and his detailed artwork for R n R is truly jaw-dropping. 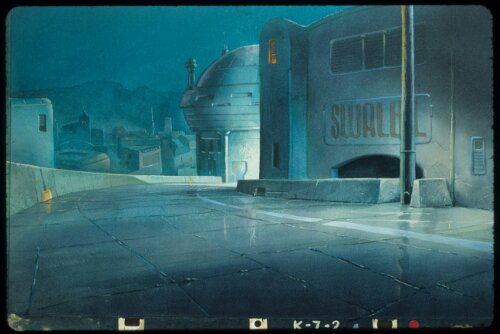 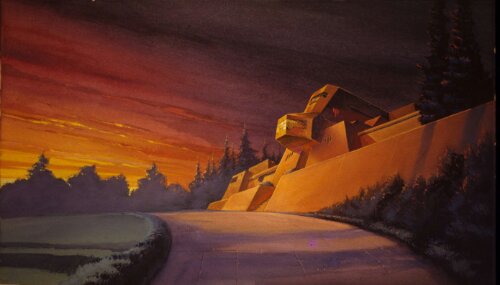 In spite of the corny sounding names (Ohmtown, Mock, Nuke York)  I think they did a great job. And they even found a way to explain all the anthropomorphic animals out there as the new mutant results of a future war. 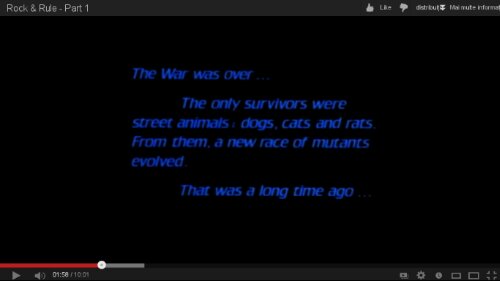 I apologize for all the screenshots and ensuing wheel-of-death still loading… Just couldn’t cut down on the fabulous backgrounds, colors and characters.

No sacrilege intended, the only animation that comes close to mind when talking about Rock n Rule is Akira at the other end of the 80s.

Of course Akira is a world famous masterpiece, but in a more humorous vein and a musical style, R n R features the same run-down, polluted, highly oxidised and ferruginous cityscapes and crusty surroundings.

Besides its boring evil Devil rock plot it manages to combine behind the scenes life of garage bands aiming for success, aging and corrupt rock stars, signing a new voice- contract and music as a portal to hell.

There is also heavy use of A.I., old school 3D, laser torture, hypnotic album holograms and future drugs such as a floating pink Tesla-ball.

There is also an ecologic sub-plot with more energy needed by the huge concerts and the move to Ohmtown just because of nearby energy plants that could. Every thought about the huge carbon print this kind of stadium concert makes?

As a token of Steampunk as well as cyberpunk territory you can see a lot of floating Zeppelins.

There is also the obligatory view of the rusted Liberty Statue already a site for shanty towns and shabby shacks.

the future looks a lot like a night club or discotheque crossed over with an abattoir.

At some point R n R really looks like a promo for an album.

Otherwise the music is not that bad and there are a lot of new wave and other post punk offspring.

Conjuring the demon in the final scene is a truly phenomenal and the metamorphosis i s a separate animation is itself.

There is another little hidden gem – the sadic “educational” animation watched by Mock’s bodyguard trying to separate good from evil.
Here is a screen saver for you: