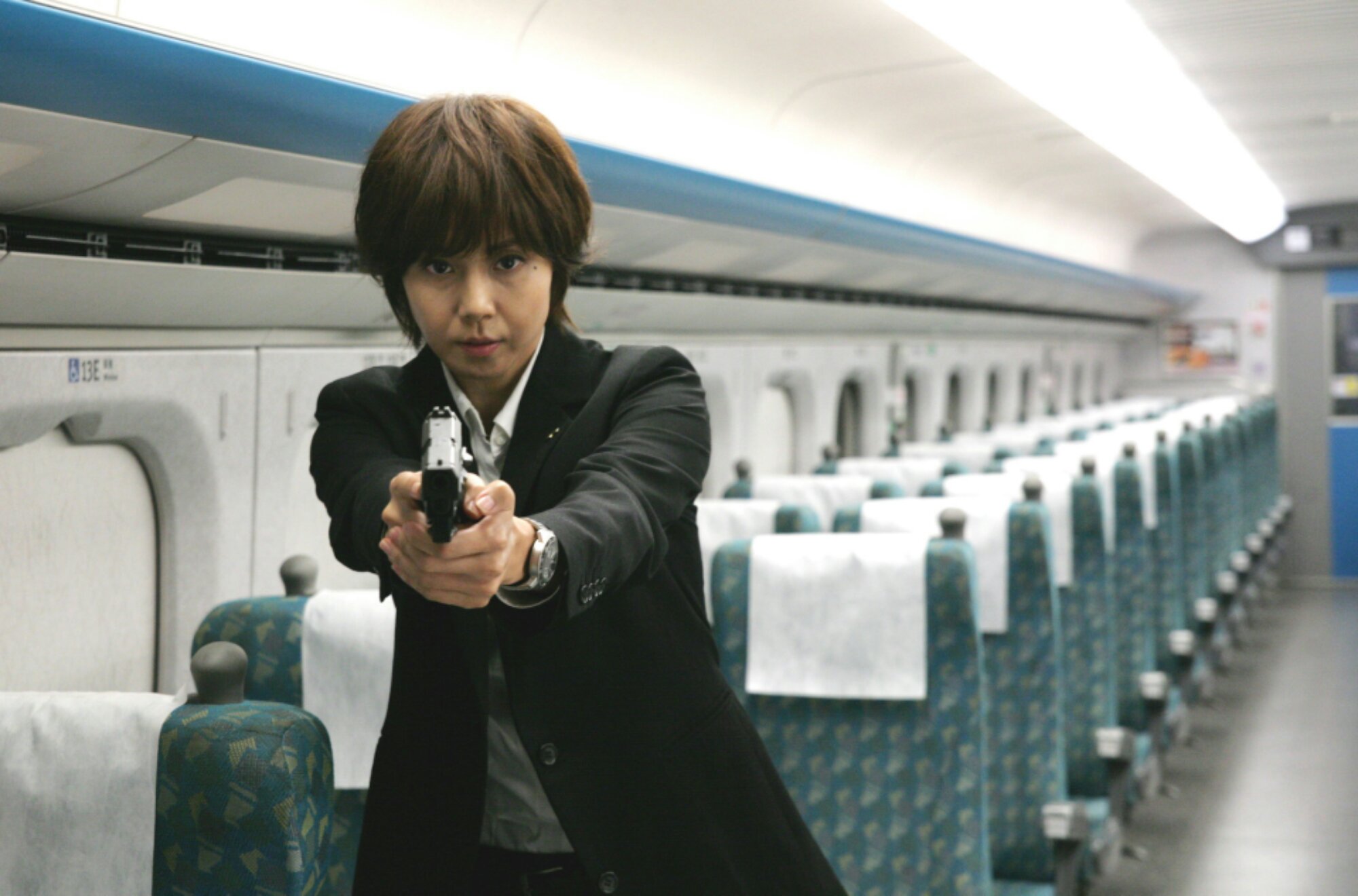 I still think Takashi Miike is able to outmaneuver every stylistic cookbook of any kind of genre, new or old, Western or Eastern, if such rules apply indeed anymore. Shield of Straw is both a wink at Tony Scott (Hunger, Domino), as well as samurai and yakuza flicks.
Shield of Straw has both melodrama to offer as well as mid air pirouetting buses, vengeful billionaires and unflinching killers. The whole movie is impeccably actionistic, quaking under a constant siege of sudden (if previsible) attacks from all sides, from inside the core group of policemen, organized crime or freak violence by outside strangers. Basically it’s the hunt for one condemned man – a pedophile serial killer that is carried by the police to be judged. It’s not mere western movie ‘lynching’ that the elite special forces guarding him try to avoid. The relative of one of his victims happens to be a powerful and rich man who advertises online a bounty on the head of this killer that everybody hates and only a few chosen policemen try to escort. It’s an act of financially-backed revenge that transforms the entire city into a battlefield.

The ploy oh the film is to transform the whole procedural escorting business into a terrible, unequal battle of modern samurai (!?) policemen obsessed by their convictions and apparently conflicting and mad sense of duty (to protect a serial killer). 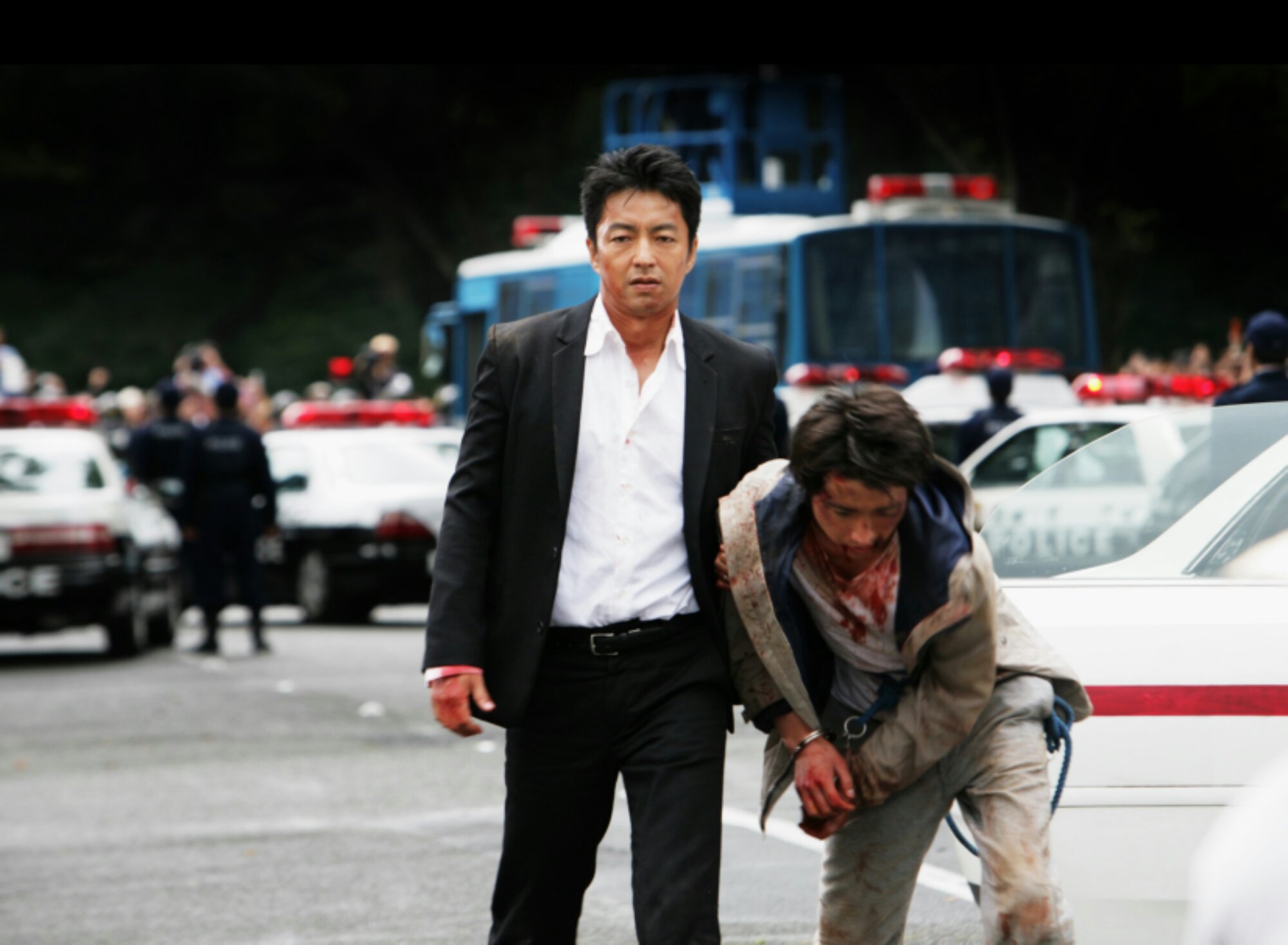 What is more important is that this sense of abstract duty is anchored in a brutal reality of economic precarity and post-Fukushima Japanese society. What I think Miike was on the way to report is not from the front lines of the Sarin gas attacks of the 90s, the act of a doomsday sect, but the new mass recruitment of desperate citizens that are ready to assassinate for a chance to get out of their misery. That 1 billion ¥ reward for the killer is finally making everybody desperate enough a moralist, an instant vigilante – this is why there is no real protection out there.
We basically identify with the good cops and condemn the ‘traitors’ only to find out that all a bit more information about them from a lowly source – a taxi driver women. She is the only one who will drive them safely trough the police convoys and potential bounty hunters. The taxi driver lady is an artificial (script dictated) guardian angel that starts to relate all the economic troubles that plague the society where everybody becomes a kamikaze recruit – ready to take hostages, impersonate policemen, leak vital information only to end up dead or dying in the attempt. Financial incentives and a constant stream of media and online advertisement, not gas is poisoning the atmosphere in the subways, trains or inside the police hierarchy. The minute the website and media broadcast the message of shoot to kill – a majority of normal, normally law abiding persons, even the state officials start to act like vessels to unseen forces, making them capable of everything, to switch into another role from one second to the next, ready for attack. Nearly everybody is being compelled, and everybody seems to be under some sort of financial trouble or debt. I think Field of Straw is one of the first films to dramatize the new kind of breakneck decisionality moral mire (‘if the killer of my wife is going to be killed after I kill this other killer is it going to be ok?’) and criminal employment (gun for hire) under Debtocracy.