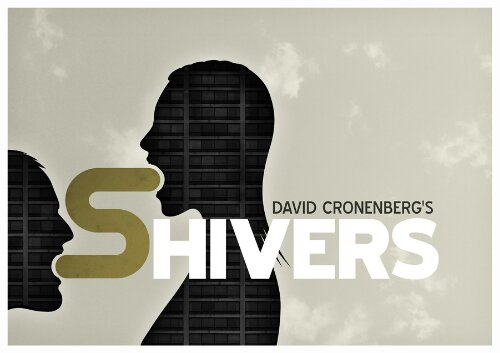 This is the SHIVERS poster by Zlatko Parmakovski (ex-NMP art collective) for the Мракфест or Darkfest (‘dark’ = ‘mrak’ in Macedonian). I think it does more for the movie than the original posters. Shivers is the second movie of Canadian-born new flesh director David Cronenberg. Really enjoyed to put the Canadian labelling, even if I totally agree with Nagisa Oshima’s indication against labeling Japanese national filmography. I truly consider Cronenberg not as a product of the Canadian psyche(whatever that means) but of transnational and para-national biomedical platforms that keep realigning the normalpathological continuum. Biomedical platforms was used as a term in a research done by Alberto Cambrosio and Peter Keating on practices that link different laboratory, clinical, public spaces together and keep bodies of patients, samples derived from them, test results, and clinical entities functioning coherently across diverse disciplinary, technical, and architectural spaces(Biomedical Platforms: Realigning the Normal and the Pathological in the Late Twentieth-Century Medicine, MIT Press, 2003).

Cronenberg I think managed to show the irrumption and uneasy coexistence across these new spaces and why bodies, organs and tissues are disobedient to this unity and coherence.
In 1975 he got Canadian state culture funding for this movie. I put the Canadian production labeling because it was such a disaster at home with the funding bodies and the critics who both hated the movie. Even if it still has an unmistakable trashiness and silliness about it, it is still one of my all-time favourites. It contains highly disturbing imagery and I truly believe that it constitutes a procedure – what to do with this kind of funding, or any kind of culture/propaganda money(just thinking about Kustom Kar Kommando’s by Kenneth Anger that was done with money from the Ford Foundation for now 1966).
First – the date 1975 is also the year High-Rise by JG Ballard got published. It is truly provocative and also encouraging to see some sort of common ground, common probing and general discussing the two of them got involved with from afar, and then directly with Crash. What binds them is the arcological focus not so much for nsocial housing, living units or attempts at urban communal living – but the sort of new, shiny, nearly gated community luxury apartment that offers tremendous amount of privilege, insularity and paradisiac added values.

Both Cronenberg and Ballard are prying and taking the elevators to this new private hell, the capitalist residential “evil paradises”. Right from the start Shivers is set up as an advertising for new homes, new ultra-modern apartments outside of Montreal.

Everything is designed for fun, relaxation and comfort. Golf courses are designed by former golf champions, there is plenty of room for parking your car and the cars of your unnamed friends if ever doing a party or coming home and doing an after party. There is also a lot of medical facilities and lots of other goodies.

In a short time, very soon actually, the whole block seems to be animated by hidden mechanisms that rearrange the space, the rooms, the relationships and even the bodies. Against boredom, apathy and preservation as the main inertial force, neighbors need to be excited, teased and entertained with the help of parasitical allies, mutated organs that are the only way left for inducing transgressive sexual frenzy into the fresh&clean home environment.

The bizarre and brutal happenings that follow are always surprising to the inhabitants of the residential complex. They are always taken by total surprise and completely unprepared to face te full force of illicit pleasure and non-inhibition. They always manage to stumble on higher and higher levels of perversion that till then where apparently unthinkable and unplannable.

One of the most disturbing scenes involves a minor girl, her mother and a sort of bellboy, waiter.

The squirming bodies and highly transmitted and infectious desire fill the hallways, the rooms and the parking lots.

No one is spared, be it young or old, employer or simple inhabitant. Sincerely after Shivers, traditional zombie or vampire movies fall kind of flat. The same goes for all the gory viruses, flu and any other basic outbreak scenario since then.

The real outbreak follows the providers and dealers of a new sort of vitalism, described by Mark Terkessidis and Tom Hollert in their post Sept 11 Ensichert book. It is the vitalism of adrenaline rush, extremes and neural hyper – excitation. Doctors are the sort of blue pill providers, but I think we shouldn’t think just in organicist or worse still biochemical terms. Already the architecture, the beds and bathrooms, the daily rituals of tooth cleaning and walking are the best lab environment for all sorts of deviations that become focal and central to the life inside the high rise.

Sexual harassment becomes endemic and group sex the main activity. In the same time the brutality one is using against this is itself senseless.

The preservation of body and sexuality is made at shotgun point. Promiscuity seems to disturb and also animate everything around it.

Living rooms become operation rooms and the fact that only invasive surgery can shiver and animate the bodies of the inhabitants points to the same exhaustion of sexual technique, body energy and marital counselling discourse.