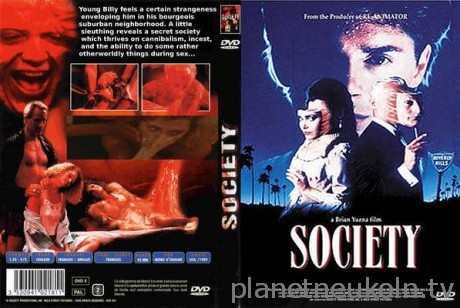 Society is an American horror film. It was finished in 1989, but not released in the US until 1992. It was Brian Yuzna‘s directorial debut and was written by Rick Fry and Woody Keith. The film stars Billy Warlock as Bill Whitney, Devin DeVasquez as Clarissa Carlyn, Evan Richards as Milo and Ben Meyerson as Ferguson. Screaming Mad George was responsible for the special effects.

Society is considered to be a minor classic in the body horror sub-genre. A sequel, Society 2: Body Modification, was in development, with a script written by Stephan Biro.

Society was a success in Europe, but was shelved for three years before getting a release in the U.S.[1] Said director Yuzna in an interview: “I think Europeans are more willing to accept the ideas that are in a movie. That’s why for example Society did really well in Europe and in the US did nothing, where it was a big joke. And I think it’s because they responded to the ideas in there. I was totally having fun with them, but they are there nonetheless.”[2]

In 1990, Society won the Silver Raven award for “Best Make-Up” at the Brussels International Festival of Fantasy Film.