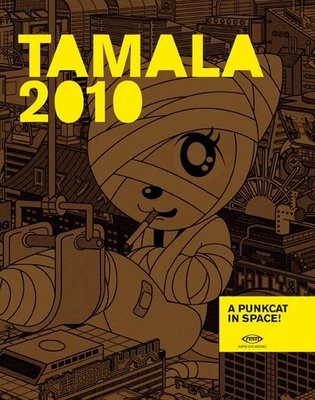 TAMALA2010 a punk cat in space is a Japanese anime feature film.[1] Direction, screenplay and music is attributed to the 2-person team t.o.L (“trees of Life”), known individually as K. and kuno.[2] The film is computer animated in both 2D and 3D, and is mostly black and white. The characters, designed by t.o.L and Kentarō Konpon, are reminiscent of Sanrio‘s Hello Kitty and 1960′s anime and manga such as Astro Boy. The film has not been released in any English-speaking countries (other than film festival showings) but the Japanese, Region 2 DVD has English subtitles. 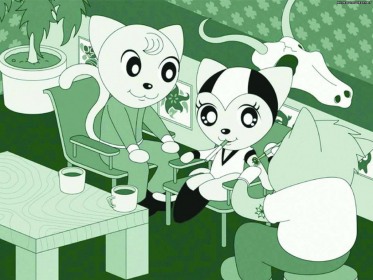 The film is in a large part a cartoon cat version of Thomas Pynchon‘s novel The Crying of Lot 49 (which t.o.L have acknowledged as an influence),[5] with elements of Fritz Lang‘s Metropolis and Oscar Wilde‘s The Happy Prince. It begins in Meguro City, Tokyo, Cat Earth, a world of corporations and commercialism, where a giant mechanical Colonel Sanders wanders through streets with an axe embedded in its head repeating an advertisement for meat over a loudspeaker. Tamala, bored with the city, leaves her human foster mother and boards a spaceship bound for her birthplace, Orion 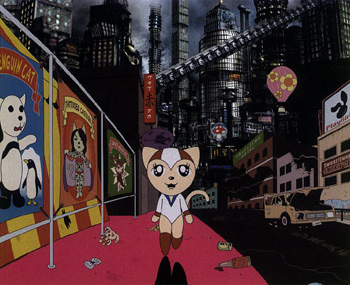