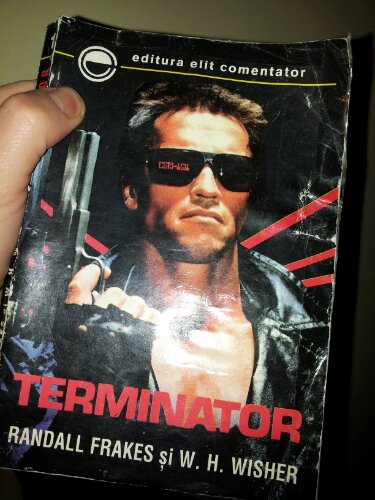 I got this book from our friend at toate.org from a fleamarket raid ending with a few other classix such as The Sphere. This was the book the movie was based on. There are several reasons why I started reading it. First, because it introduced the cyborg as a pop phenomenon into the US. Particularly this killer Terminator cyborg was always used as a sort of counterexample to the progressive cyborgology developed by Donna Haraway that used the cyborg more like a trickster figure, an unborn and uncreated orphan that doesn’t necessitate the underlying salvation narrative after the biblical “fall”. He never left the paradise because there was no paradise to begin with.
Secondarily, there is the particular year when the book was published in Romania, exactly a decade after its first US publication. I find it useful more and more to go for Frederic Jameson chapter Valences of History from his new book The Valences of the Dialectic, when catapulting trough incessant time warps. I somehow start to think that his discussion about the unexpected turns of history, when the welcome becomes viciously unwelcome, and this will help us deal with the restless Terminator as a non-terminus endpoint in history, not so much as the future executor of the world ideologic systems, as Fukuyama would make him, but as pre-programmed present, as relentless guided non-exit that is never brought back to solve the contradictions, oppositions and class struggles. Another more faithful 1984 Terminator is maybe strangely in tune with Fukuyama’s own fears regarding the outcome of transhumanism ideals, making him into the ultimate posthuman late capitalist scarecrow. Yet again another enhanced Terminator was sent to Eastern Europe, where industries, social services and pensions got terminated by de-regulation arriving with machinic precision and demolition tactics. If the workforce becomes obsolete under the new market conditions, then this Terminator is a sort of technocratic evaluative software that lays off entire human populations, dispensing with any overhead expenses. More precisely the ruthlessness or blank precision of the Terminator has become a strict preprogrammed code of functioning just after 1989. The financial intelligence has become aware of itself and is swiftly dealing with the useless, the lazy, the slow and the unqualified. For most of the West, this retrospective unmasking didn’t happen, as the Terminator moved on the other side of the curtain or in open warfare areas around the globe. Caterpillars stayed caterpillars and the unstoppable bulldozers where busy elsewhere. Only the drones might teach us that Skynet unmanned technologies are already in use. Silencing the pistons, capitalism has grafted more and more organic specs, enhancing itself with more and more sensitive tissue over its hard metalic endoskeleton that rarely shows. 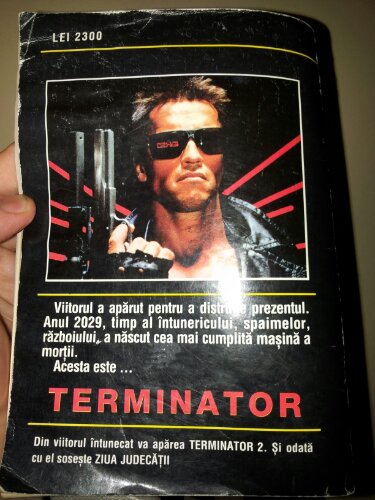 It was not just that the capitalist Terminator was making a very good job of reconfiguring the Eastern European past, of eliminating or deleting ~ 50 years of “inefficient and defective” communist planing, but also making sure no alternative versions will subsist. In a dialectical reversal the Terminator never reaches Los Angeles but lands in the only place where some memory of past resistance to capitalism or discontinuity with the pre-war period might still persist – in the former East. Meanwhile the spectre of annihilation and human survival is brought down to justify anti-cyborg protection methods and a completely militarized present where more cyborgs (special forces, swat teams, anti-terror) are brought to crack down on any sign of dissent.

The book itself is full of biblical or new testament topoi. There is also a strange hint that the mother of future resistence leader, Sarah Connor is actually also a sort of reproductive ally of stormtrooper humanity. If machines are replicating then who is replicating the future soldiers, these are issues connecting the Terminator with reproductive labour/labor. The most important biopolitical task of future soldier Reese is basically to protect and make sure that babies just get born and the future will take care of everything else. And if this just happens to pass through the reproductive system of a mother, then so be it.
The mother becomes a mini-military school and the informal survivalist education she provides is the best one can hope in such harsh times.
It is easy to overlook the role of replication in a movie or book that emphasises termination as a sort of abortion. The most disturbing question is if Reese, the lean cyborg-like soldier and utterly devoted survivalist of the future, isn’t just a bland pro-life campaigner. By then the “unborn” label was just making its way into public eye, it was usually under the banner of the yet-to-be-born and the not-yet born that was slowly moving in against the reproductive rights of women.