The Autopsy of Jane Doe (2016 directed by André Øvredal) 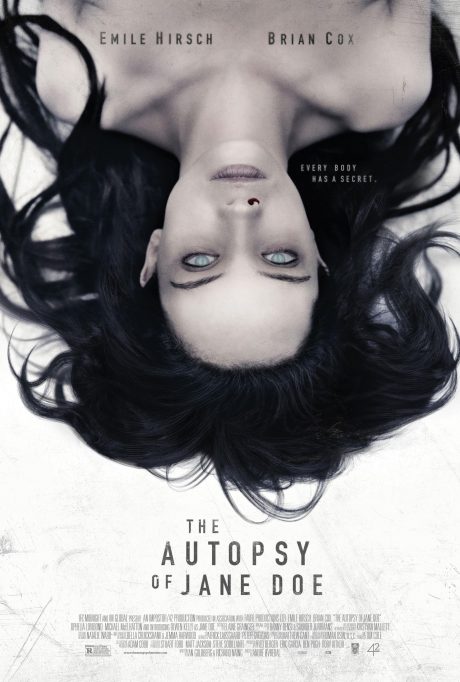 There is definitely something happening after the Scream 90s highlights or the extreme French cinema wave of the 2000s, and The Autopsy of Jane Doe might have a place near Raw, The Babadook, It Follows, Antibirth, The Witch, Get Out at least on my list. Sporting possibly the corniest settings ever: a father(Brian Cox)-son (Emile Hirsch) coroner duo probing various tissular depths of an unknown unnamed and beautiful body of a woman (Olwen Catherine Kelly), this little body horror has all the elements for a classic: a small cast, a maze of claustrophobic wood paneled autopsy labs in a basement and a relentless pace that promises laughs but delivers (finally!) well-earned chills. 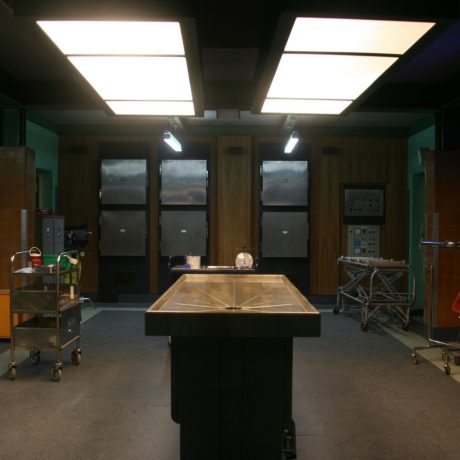 No filmic necronautic adventures should avoid dwelling into the hallways and angles of mausoleums, mortuary rooms and funerary parlors that have been a staple of small-budget horror, but few have matched Don Coscarelli’s Phantasm (1979) and its inter-dimensional Tall Man who opened up new venues, new doorways . Most offer the same old vapid, flask and livid-brand of cadaveric proximity with body bag deadites. Here the autopsy proceeds following an incessantly forensic dissection of a body in a quest with grizzly aims – such as that of performer/painter/comic book artist/freakshow collector Joe Coleman. Joe Coleman did black & white recordings of his infamous dissections of female bodies in the morgues of Budapest (the East always offering him apparently endless access and no questions asked). He was digging into the flesh, a true descendant of body snatching doctors or natural philosophers that would do anything to find traces of the soul – that elusive part of the human whole. Dissection does not eliminate or extract but places instead the unrecognizable features of an undefinable entity in between the folds of flesh and abject bodily remains of women as didactic proof of having hosted a soul.

With this in mind a father & son family business duo are somehow drawn into the mysteries of a perfectly preserved body (much too perfectly) that shows the marks of terrifying contemporary mutilations, (sex trafficking?), and heavy use of corsets. There is a constant troubling of timelines. In a sense this is (spoiler!) not just a movie about the same old American Gothic bad conscience (Salem & all that) but a strange superimposition of the instrumental reason on top of the most abstruse exorcisms available to previous generations – establishing COD (cause of death) completely overlaps with COP (cause of possession). In fact what the terrifying and bloody trials of the two father & son (or viewers/participants) trace or enact is a kind of torture suffered by this young woman. The naked perfectly dead (almost like a Sleeping Beauty romantic body) is exactly like a so many other naked bodies of women in a representational traditions of the Western world up to 1900. As John Berger puts it in his seminal series and book Ways of Seeing (1972), naked (nude) bodies were usually commissioned by wealthy owners to be shown to their friends and were are never to be seen as truly naked, but living or dead nakedness was worn like a pose, like a cloth covering the insides, and expressing what the masculine viewers payed for. Women are never relaxed or never look at their partners (like in so much porn industry videos) but outside of the frame/painting to an invisible, absent audience and potential paymaster. Jane Doe is an accumulation of dark energies – because countless bodies of women have been suffered various mutilations from cultural aesthetic mores to economic abuse and sexual enslavement. But the movie doesn’t stop here and doesn’t just heap up abuse on the womanly body as a passive and receiving end of masculine/patriarchal violence. This is not just a receptacle that was meant to stay dead, it was meant to be discovered, it was meant to be dabbled with. In this sense it  is not a hylomorphic receptacle in the tradition of Aristotle, it is actually a restless sigil, a cypher that is affecting everything around it beyond the screen and throughout various wavelenghts including radio waves.

It is no accident that the son’s girlfriend gets killed by mistake by the father. Doom is closing in, as both men make mistakes and gestures that incriminate them more and more. 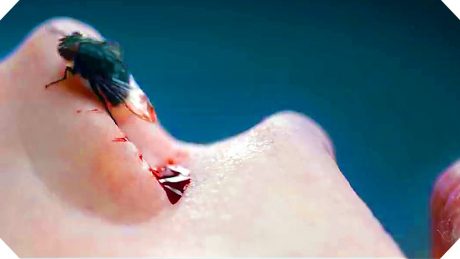 The beautiful bare surface of the body wraps up not just crimes from other centuries but also a sort of place of production, like a living factory, it is really so much more than just an unknown body. Finding the criminals or the perpetrators is not the aim. The body is not just a procedural puzzle but is a veritable cypher packed with alchemical and black magic explosives. At the same time the black magic is not just plain demonic but somehow includes all the injustices and false accusations. Those false accusations feed back on us and spill out of the body. There is talk about ritual – but ritualism or hidden ritualism is everywhere present, the human sacrifice aspect is always close to the operation table, the bleeding and draining of the blood as well as the most scientifically motivated neurological lamination of countless brains. 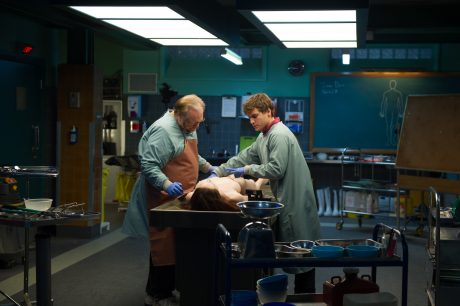 I really liked this movie that works out its premise very well and that never strays from its horrible course. I could also laud the cutting, the lighting and the really effective camera work that grips you and never lets you go, even when there is full visibility and when we actually know exactly what we are seeing. Even if every organ, every discovery is being labeled, placed in a plastic bag and sealed, there is this feeling that all explanations don’t match up and don’t account for the most bizarre thing: that there are no outer signs of violence. This masked violence of the internal damage sustained by a perfect body is what horrifies and pushes us to the edge of the screen somehow and outside of the bodybag. 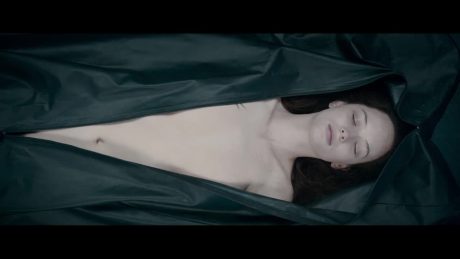