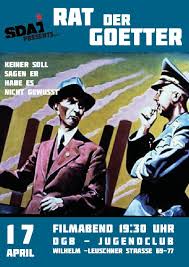 This is an East German propaganda film based on Richard Sasuly’s book IG Farben from 1947. Sasuly was one of the first to write and investigate the implication of Big Business oligarchy in the Nazi War effort. His book is not easy to find – so I would recommend a look at the detailed notes from Gravity’s Rainbow (a book by Thomas Pynchon where IG Farben plays a key role) wiki. Council of the Gods from 1950 is considered one of the first movies marking the new antagonism between former anti-Nazi allies and new Cold War enemies: the West vs the Soviet Union and its satellite states.  The title refers to the powerful council of German Chemical & Pharma Cartel IG Farben from 1930 to the Nurnberg Trials and after. 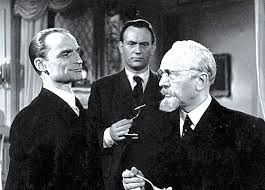 It was banned in West Germany and military commandants of West Berlin’s three occupation sectors registered an official complaint to the Soviets. 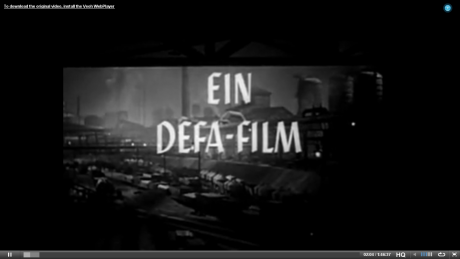 But critics also came from the Social Realist side, such that State Secretary for Press and Agitation Hermann Axen criticized “The Council of the Gods for over-emphasizing the roles of the capitalists” and because it employed just one common worker (Uncle Karl – portrayed by Albert Grabe). It is also possibly the first movie to articulate anti-capitalist and anti-American economical positions after the war (Alexander Stephan). Friedrich Wolf and his Soviet co-author, Phillip Gecht used beside Sasuly’s book many judicial papers linked to the IG Farben trial as well as an accident occuring at BASF works in Ludwigshafen that killed 280 workers on 28 July 1948.

“a dictatorship of monopoly capitalism. Its ‘fascism’ is that of business enterprise organized on a monopoly basis, and in full command of all the military, police, legal and propaganda power of the state. […] Hitler was pushed to the top, without support of a majority of the people, by a coalition of the heavy industry leaders and Junker militarists.”  (Robt Brady, American economist, describing the Nazi state, Sasuly, IG Farben 1947, page 128 and 14) 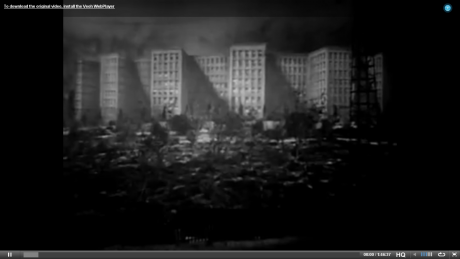 Monopoly capitalism should ring a bell or two even in today’s global climate.  I was not particularly interested in the colourful propaganda tactics of the movie. But it is maybe significant in its employment of ‘tabloid’ style accusations directed at the upper class society – as a womanizing, cruel, lusty and promiscuous group without any moral sense and that is interested only in rising quarterly profits and talking about rare breeds of dogs. Even so, it is quite refreshing (imagine nowadays!) to see such a complete index of decadence and human rottenness directed at the Old Privileges of the Big Business. It is really amazing how even some of the Oriental decadence makes its way into the collections and lush bourgeois interiors. 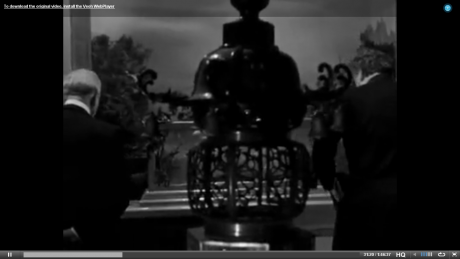 They are full of chinoiseries and Hindu sculptures. The arch villain of the movie privy councillor Mauch is leading his pre-War business partner, the American Germanophile Standard Dutch Oil Mr Lawson into a secret alcove behind a Chinese folding silk-screen/paravan. The discussion takes place literally behind the screen. The room is full of (archeological loot?) Japanese or Chinese lamps, antiques, aquariums and temple- bells. It is as if the imperial luxury (also the occult powers) of the Orient are invoked to sustain the secret deals, the conspiracy talks. 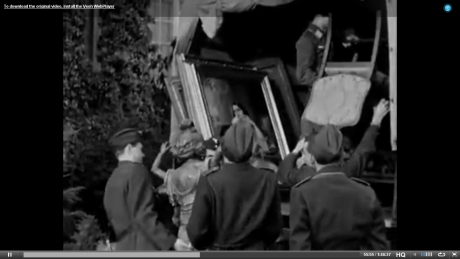 There is also a great scene with a multi- armed Bodhisattva sculptur that is being packed inside a car as the Nazi go on the run and the goods are shipped elsewhere. The comment is that this Oriental sculpture is a representation of greedy Capitalism/the Council. While talking about economic spheres of influence, about oil and synthetic fuels, about selling patents for invention they softly touch a crystalline sounding bell. It is no really so bizarre if we think that there has been such a love affair btw Nazi mysticism, Ariosophy, Hinduism that after the war started proclaiming Adolf Hitler was an avatar of Vishnu (see The Lightening and The Sun by Savitri Devi ‘Hitler’s Priestess’). 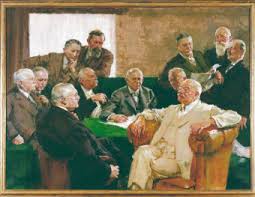 The  board of directors was nicknamed “Council of The Gods” by employees and so is named in a painting by Hermann Gröber from the 1920s with Carl Bosch and Carl Duisburg facing each other. Carl Krauch (1887-1968) Nazi War criminal and industrialist was a longstanding member of the board and general committee, and chairman of the supervisory board, 1940 to 1945, succeeding Carl Bosch as chairman of IG Farben. He was the model behind privy councillor Mauch in the movie. What was more noteworthy in this epic Stalinist docu-drama was its critical depiction of industry and chemical science. Wolfgang Schivelbusch is an historian who wrote of perception, of the cultural and artistic impact of electrical technology and especially light, streetlights on modernity (Lichtblicke : Zur Geschichte der künstlichen Helligkeit im 19. Jahrhundert München/Wien 1983, published as Disenchanted Night: The Industrialization of Light in the Nineteenth Century Uni of California Press 1995). In an article in the Cabinet magazine he discusses the so-called “rye and iron thesis” of the rise of Nazis in the 20th Century. This thesis pits new modern industries such as chemistry and electricity versus the old agriculture and heavy industry alliances that started controlling German foreign policy. The militaristic “rye” Junkers from the Prussian East and the “iron” Ruhr region barons building a new navy lead to the 1918 defeat, Hitler & all that. In this hypothetical scenario, both electrical and chemical industries would have produced a more peaceful, enlightened (literally) and more pragmatic policy, instead of the heavy industrial mindset of Krupp & Thyssen. The truth of this is still being debated today – conspiracy sites proclaiming the chemical superiority over the Leninist ideals of electrical current and electrification. Even in Germany itself we have the opinion of none other but ex-Dadaist, economist, Spartakist and terrorist Fanz Jung (1888-1963). In his novel from 1923 Conquest of the Machines inspired by numerous setbacks and major disillusions concerning the workers struggle, he puts his last hopes on the electrical workers and engineers. 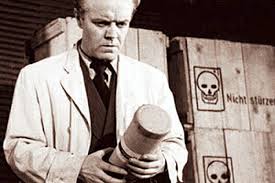 The Council of the Gods makes it clear that only proper ideological positions can out-balance the destructive potential of technology and capitalist greed. It is a film that struggles with the depiction of some of the most beloved symbols of Socialism: factories, furnaces and industrial architecture and its immediate results – the basic chemical substances of modern synthetic industry. The opening scene is really great – we basically see the huge IG Farben facility where the good guy, the chemical scientist Dr Scholz is being employed in the Research & Development Department labs. He is nearly suffocating together with his female co-worker, coughing his lungs out while trying to open the windows to let some air in. 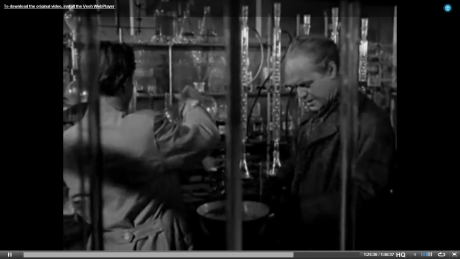 Especially in Romania this scene should be evocative – the potential of chemical industry was used as decorum and as a symbol of the countrie’s progressive ideals – while its rulers have been blamed and satirized as self-styled chemical wonder makers with fake doctoral credentials. As chemical industry was leaking out, its refineries and plants where at the symbolic forefront of homegrown detergent and fertilizer revolutions. Chemical industry was always caught in the powerful dream of autonomy and self-sufficiency. Council of the Gods – brings back an almost anti- Ubermensch mythos, the catastrophe of captains of industry who became god-like, deciding over and above everybody else. Julius Evola, an important apologist of martial elites and of the vertical hierarchies summarizes the God-like foundational role of councils, board of directors and CEOs ultimately – God- like because of their loftiness, inner rituals, privy meetings, and of their abstraction from lowly humanistic and pietist social concerns. 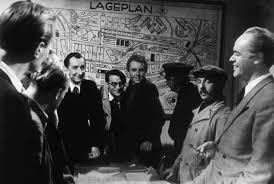 Dr Schulz, the naive hapless employee is a bizarre character – he never follows his products to the end process, even if they obviously lead to annihilation of other creatures (lab animals in the first case). His basis for the raw production of chemical warfare gases needs to be in its final stage so he can oppose or protest. Even so, he tries to cover up what he knows, not only from his son, but also from the other chemical plant works (including his relatives). The final accident at the factory has to arrive on order for him and all the others to start the struggle for peace. Gustave Le Rouge – the great French sci-fi author from 1900 (La Conspiration des Milliardaires, 1899-1900) weaves his yarn around merciless cartels, so as to condemn the (increasingly) anti-European US oligarchy for its world supremacy plans and use of military ‘robots’ (invented by Edison) to conquer the world. Today there is all this talk about the Russian (or Ukrainian, or Romanian) oligarchs but the term ‘oligarchy’ includes at its base monopoly capitalism in all its forms. Far from raw materials and hungering for dwindling resources, the chemical cartels have synthesized new political ideals. Industry has also conjured up a rationalized cartelization of state, politics and private industry like none seen before v(as envisioned by Walter Rathenau for example).

Good or bad, luciferian or productivist, the 1900 was rich in various models of Leviathan Corporations as solutions to the future on both sides of the Atlantic and one of the most fantastic came out of the mind and pen of US businessman and inventor King Gillette(the man behind the Gilette razor). He was author of several utopian socialist treaties The Human Drift (1894), World Corporation (1910) who envisioned the World Corporation and a unique, beehive MegaCity where the whole population of the country could be concentrated in buildings akin to the contemporary malls.