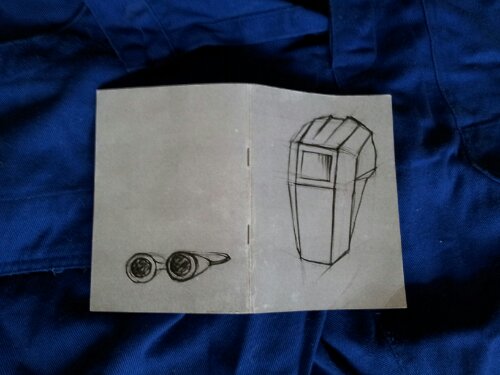 Planetneukoln.tv should allow more artist books, brochures, leaflets, catalogues into its ranks. So I am glad to wonder about a booklet published in parallel with a group show roughly titled What we destroy and celebrate in the same time at the Salonul de proiecte în Bucharest at the end of last year. It’s also a bid to encourage more ephemera stuff that didn’t even made it to the net. Most of the films here got good comments or reviews already around the net, but there is also a lot of postponed and quite hard to recuperate stuff. Two points first. Although I’ve become acquainted earlier with a similar, previous project Inspired by Life / the h.arta group http://moodboard4inspiredbylife.wordpress.com/t he-clothes/ from Timișoara, I would like to focus more on what I gleaned from Julia Toma’s overall exercise. Also, I must admit I didn’t read or even browse through David A. Kideckel book “Post-socialist Romania: the work, body and culture of the working class” (Polirom, Bucharest 2010), that Julia Toma references in her work. Barring that, I think that we should look more into clothes and especially working clothes as husks from previous moultings. Moulting is quite widely spread, even among far related groups, and is naming a process of regular casting off body covers, outer shells, exoskeletons, feathers, hair, even body parts or skins. If we think that our skin is the biggest organ of the body surface-wise, then our dead skin shedding not only helps us detach parasites or offer them free rides to somewhere else, it also points to some wider moulting processes happening around us and on top of other cultural layers we shed. These uniform working skins are shed like used bodies. As the associated industries and labor practices get shed depending on seasonal changes of the capital, the bodies and uniforms follow. I would contend that senescence is being also inbuilt through forced working clothes moulting. “From the blue coat to the flowery housecoat, with a stop in corporate – augmented – reality” is also helping us narrow down the variety of outer shells to specific working costumes. Maybe (as much of this pre-1989 artifacts already do) exhibiting or collecting these costumes might establish a small nostalgia-fed industry on its own. Apart from that I really think about what I would call another way of forced moulting that we are seeing put into practice. The initial forced moulting is a technique whereby human breeders have wanted to improve egg-laying for example. Animal welfare groups have sometimes successfully combated this technique. The closed artificial conditions of big poultry farms postpone moulting with ensuing loss of egg quality, so moulting with the help of stress or dietary measures (starving or withdrawing certain nutrients) is induced artificially. 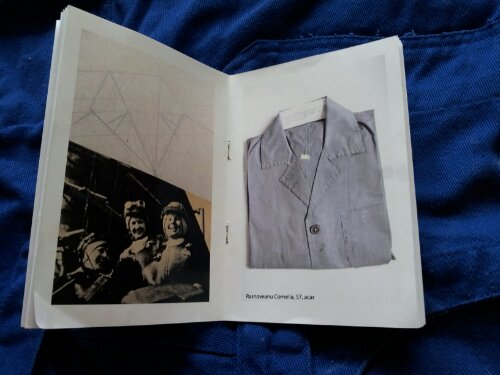 The Romanian blue working or protective clothing was a small subset of a larger blue-indigo-cobalt continuum that would probably find its highest pigment dispersal after the 1949 declaration of People’s Republic of China, although the capitalist automotive industry had also been proud of dressing and undressing its workers in cerulean blue colors. Generally speaking we could say that blue or white collar are connected with a general working dress code hierarchy visible at continental and historical scales as well as a hygienic aesthetic privileging the white and fair. The overall working dress colors might act as a huge marker, getting diluted or concentrated as the swarms disperse, gather, loose and are forced to grow back again their working clothes. The Praktikerian and Hornbachian workerism is also fond of blue and overall costumes, although it is definitely male workers or more precisely workers looking like hobbyists that get depicted in recent adverts & billboards. Fluorescence is making a strong impact transforming construction sites into raves while signalling accident prone jobs and people. What I consider more important and not so self evident is her interest in showing that overalls should be mostly regarded as a unisex costume. She also documents the transgender exchanges between the feminized workspace at home and the blue unisex in the factory. The housecoat can be genderized whenever the vegetal, flowery patterns start covering the textile surface, also making manifest that the factory didn’t end at home. There was a kitchen uniform. Blue or grey where also the colors of efficiency, of easy bulk cleaning. Ta(y)lored working clothes are features by many dystopian vision as well as early Soviet ultra-taylorists such as Aleksei Gastev and his motion study based works(How to Work/Как надо работать, 1923)in his aim to rationalise labor practices. The Terminator movie also has a key scene where the cyborg is measuring literally with his sight the clothes of he humans in a bar. Matching the proper garment is like searching for a perfect body fit. He is basically scanning and classifying everybody numerically into body sizes and preparing to slip into their clothes.

Yevgeny Zamyatin’s unifs from his 1920-1921 novel We are markedly blue-grey, both for women and man. Blue-grey thus becomes the color of the One State egalitarist scare scenario of a nightmarish transparent mathematical future where American Taylorism and Gastev’s “chronometration [ khronometrirovanie] of time” is scheduling every aspect of life from work to sex. Zamyatin’s State Numbers are brought in line with a new systematised naming where each individual has a decimal code attached to an alphabet letter. The numerati mathematicians and engineers building the One State’s triumphal spaceships are themselves numbered. The characters in the book have names such as D-503 or O-90 or I-330, even or uneven depending on the gender. It’s a vision as convincing as the radical quantified self movement, where numeric self-monitoring is increasingly being cherished as a way out of the erratic, unpredictability of postindustrial life and its crumbling health systems. 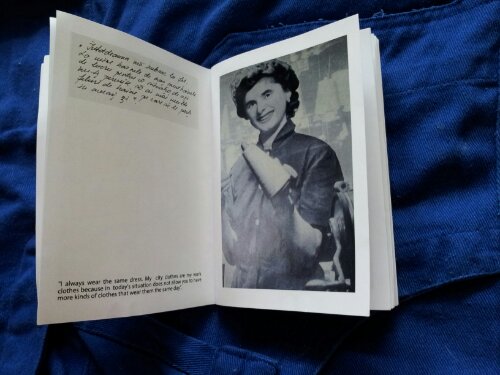 In the pre-1989 High School, before any Personal Numeric Code was introduced, the four decimal numbers matricola (from înmatriculare, registering in Romanian) was always in sight, sewn on the dark blue uniform in yellow on a patch right on the top part of the right sleeve. I had the good/bad luck to have an easy to remember one: 1234. Usually this number was used just in case you wanted to falsify ur name, in case you did some mischief and where liable for punishment. I was always curious about who or through what system, aleatory or not, you were issued such a number. Also about its history and widespread use during the time. Hand written names on towels and kindergarten clothes where in stark contrast with the school given matricola. Some second hand clothing retain the mark of this handwritten labeling (usually by parents) still. If the smudgy monochrome can still be associated or celebrated (see the Romanian presidential campaign slogan Proud to be Grey) as something totalitarian or bureaucratic, the colored hues are awarded to the “free”, starting with Zamyatin’s instinctual, pre-social anarchic and forrest dwelling Mephi, refugees from the clutches of the monochrome State. Again hues are not always signifying the alternative uniform in futuristic dystopias. The ageist future of 1969 Logan’s Run novel is coloring its uniformed members depending on their inbuilt senescence as they approach the false promise of a eternal rebirth in a new baby body. The Runners seeking escape from this forced moulting computer run utopia, are usually the ones that have reached the final color phase like the yellowing leaves on an autumnal tree. Working clothes moulting should pinpoint the accelerated phases of beings laid off and the pressure on laboring bodies to constantly grow new skins.