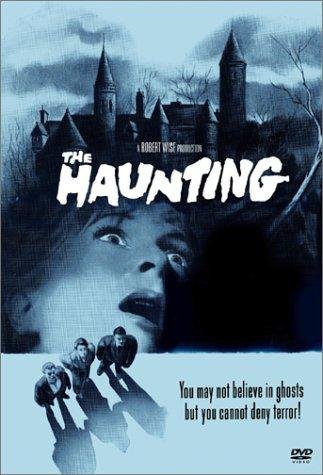 The Haunting is a 1963 British psychological horror film by American director Robert Wise and adapted by Nelson Gidding from the novel The Haunting of Hill House by Shirley Jackson. It stars Julie Harris as Eleanor, Richard Johnson as Dr. Markway, Russ Tamblyn as Luke, Claire Bloom as Theo, Valentine Dyall and Rosalie Crutchley as Mr. and Mrs. Dudley, and Lois Maxwell as Mrs. Markway. The film centers around the conflict between a team of paranormal investigators and the house in which they spend several nights.

On the Bravo network television show 100 Scariest Movie Moments, The Haunting was listed at eighteenth on the list.[citation needed]

“The Haunting” opened in 1963 to mostly positive reviews, including Pauline Kael‘s, who praised it as “elegantly sinister… good fun”.[citation needed]

The film’s stature and following has grown steadily since its original release (Ted Turner’s company bought MGM’s backlog of classic films in 1986), and is considered by film historians to be perhaps the finest ghost movie in filmdom.[citation needed]

Director Martin Scorsese placed The Haunting first on his list of the 11 scariest horror films of all time.[3]

In 2010, Cinema Retro magazine hosted a screening of the film at Ettington Hall, where Robert Wise shot the exteriors. Richard Johnson was a special guest at the event and participated in a Q&A prior to the screening. Johnson recalled that Ettington Hall, now an elegant hotel named Ettington Park, was a private residence at the time and that this was the first occasion he had actually been inside the premises.[4]

The 1995 White Zombie single “Super-Charger Heaven” contains film dialogue spoken by Richard Johnson: “Look, I know the supernatural is something that isn’t supposed to happen, but it does happen.”

The Misfits released a song called “The Haunting” on their 1997 album American Psycho.