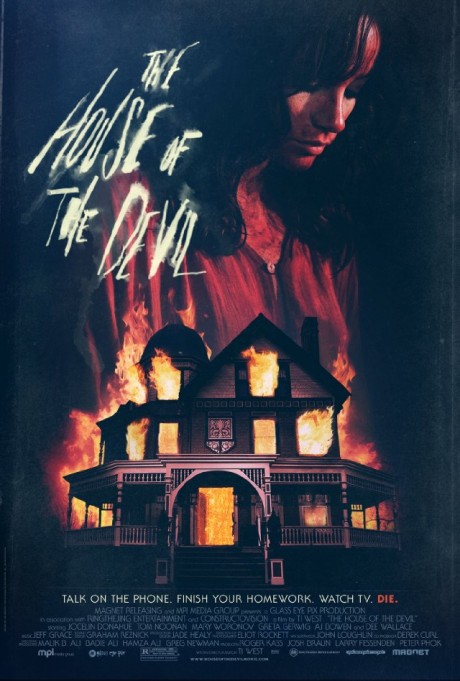 The House of the Devil is a 2009 horror film written, directed, and edited by Ti West, starring Jocelin Donahue, Tom Noonan, and Mary Woronov. It combines elements of both the slasher film and haunted house subgenres while using the “satanic panic” of the 1980s as a central plot element. The film attempts to recreate the style of horror films from the 1970s and 1980s, using similar filming techniques and film technology as those which were used during the era. Unlike other films made in the 1990s and 2000s that attempted to revive the horror genre (for instance, the Scream films), the film does not use satire or irony to convey the story, but plays it straight in order to be as true as possible to the style of the decade’s horror films.

The film was shot in Connecticut, USA. Taking place in the 1980s, the film was made with 16mm film, giving it a retro stylistic look that matched the decade.[9] Similarly, some aspects of the culture of the 1980s (i.e. feathered hair, Samantha’s 1980 Sony Walkman) are seen in the film as signifiers of the decade.[10] The cinematography of the film also reflects the methods used by directors of the time. For instance, West often has the camera zoom in on characters (rather than dolly in as is now common in film), a technique that was often used in horror films of the 1970s and continued to be used into the 1980s.

A promotional copy of the film was released on VHS in a clamshell box like the ones that many early VHS films of the 1980s came in.

“Though its underlying themes are familiar, House of the Devil effectively sheds the loud and gory cliches of contemporary horror to deliver a tense, slowly building throwback to the fright flicks of decades past.”