The Jupiter Menace (1982 documentary by Lee Auerbach and Peter Matulavich) 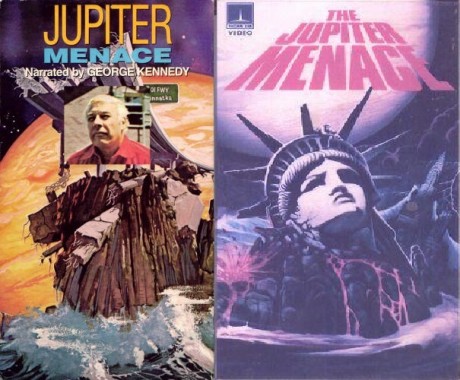 The Jupiter Menace is an incredible rare documentary (it was even difficult to find a proper cover). One could really speculate why – and it is really fun to enumerate the options. Some may say it’s either because it is a complete bogus story of end-of-the-world millenarian conservative Christian radical trash or maybe even because it’s an embarrassment for the producers themselves. I would actually argue for another thesis – the possibility that it represents a lost link in the history of the documentaries, really a direct expression of eschatologic doom & bleak predictions, that would hunt the survivalist underground (and not only) in the united states for years to come. It is an largely unintended shockumentary of sorts, and also a bizarre proto-climate change extinction movie. The 70s have been largely seen as a generator of end of the world visions, of pollution and the start of the big catastrophic and largely pessimistic outcomes. The 80s has been a true epoch of paranoia – of suicidal neo nazi gangs (Cobra), of repressive prison cities (Escape from NY), of cosmic out-of-time out-of-place reawakened threats (Xtro, Prince of Darkness). It was all part of the general mood and common knowledge. And Jupiter Menace is as official one can get and it has a well-known respectable actor narrating. I’m sure it also spawned a wide range of other conspiracy theory docus such as Zeitgeist and many others. Clearly, in the most acute phase of the Cold War there was a lot stirring and shifting around as if the frequency was not yet clear or established. We shouldn’t dismiss this documentary as a dated product of its age. It should be put in a larger perspective that would encompass the doomsday stories from the fringe cultures in Eastern Europe as well as Japan, who was also rediscovering the mythical Neolithic roots of Tokyo at the time for example trough the works of Nakazawa Shinichi. In a sense we have also the big burden of rising libertarian anarcho-capitalism and Californian Ideology being both in lockstep and out-of-step with this offshoot of darkening skies and post-hippie gloom and doom. 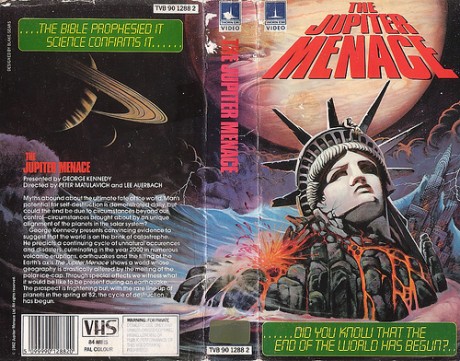 It opens up in one of the most incredible places that you should be familiar from the dozens of books written by Dan Apostol (or your local variant thereof) during the 80s (in my case) – at the so-called arcological cities “pueblos” or Great Houses of the Anasazi culture. These unforgettable urban structures (think of the semi circular Pueblo Bonito) spread along the Chaco Canyon  to the rhythms of a culture that has bloomed and withered out nearly 700 hundred years ago in the American SW most probably due probably to changes in climate, rainfall patterns as well as over-farming etc. The so called 300 year Great Drought came after aprox 1130 and collapsed most of the civilizations ranging from South (Tiwancu from Lake Titicaca) to North America (Mississippian culture and Anasazi). The admixture of literal readings of the Bible is inter-spread with various ‘scientific’ or techno- gnostic reappraisals of ancient prophecies and predictions. It all seems to go back to such again forgotten documentaries as Hal Lindsey’s 1979 The Late Planet Earth(narrated by Orson Wells) where biblical narratives and the coming of the Antichrist himself.

Jupiter Menace documentary leans more on the religious and atomic scare side than on the climate change/environmental stress, maybe because the idea of environmental justice was far away or was always packed up with religious overtones in its American context. For many it might feel like an especially bad example of 80s fringe paranoia, but for me it’s somehow a delight that such docus got made. 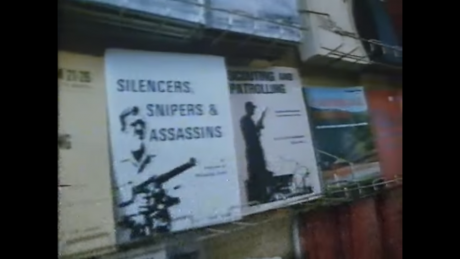 I consider it a very important piece of evidence in itself about the kind of energies and brooding atmosphere that was animating much of the Reaganite and Tatcherite 80s. An incredible There is an incredible amount of fringe characters featured and interviewed: from an ex director of DARPA Peter Franken turned doom prophet, from computer using catholic priests dating the Apocalypse, to soothsayer seismologists, to various psi power activists, mediums and a very large portion of survivalist, ultra-conservative militarist militia communes, self-organizing against what they regarded as governmental encroachment or future conflict. Paramilitary and contras (a general term for various US backed and funded right wing rebel groups in Nicaragua from 79 to the early 90s) activities, items, worldviews, accessories and aesthetics seem to spill over into the underground. 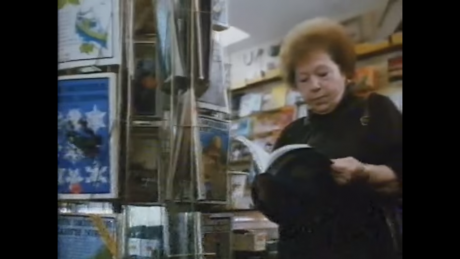 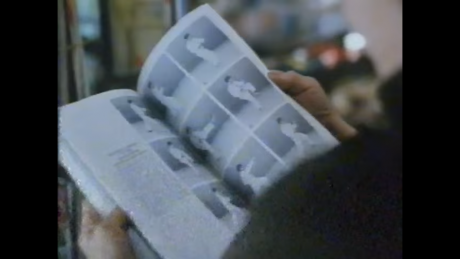 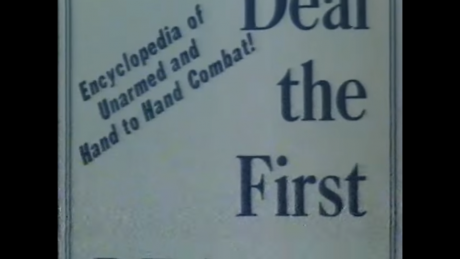 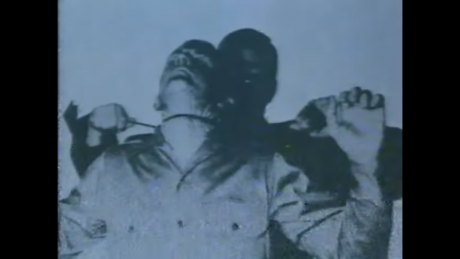 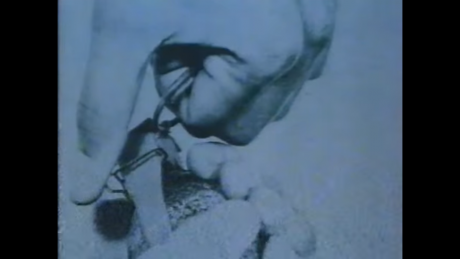 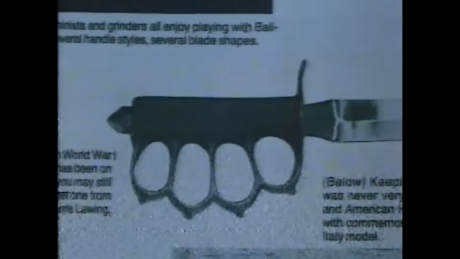 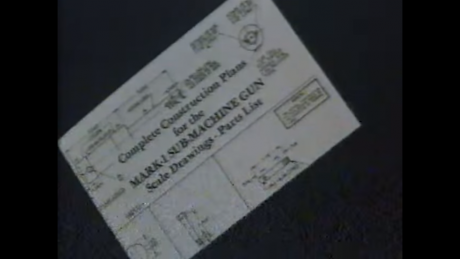 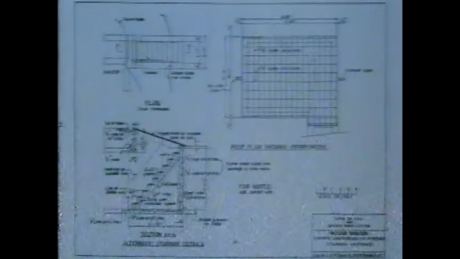 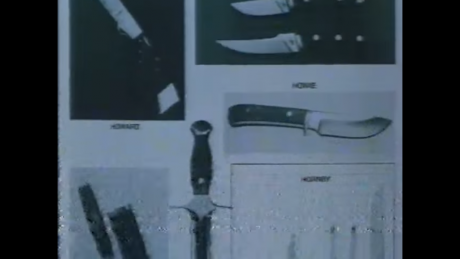 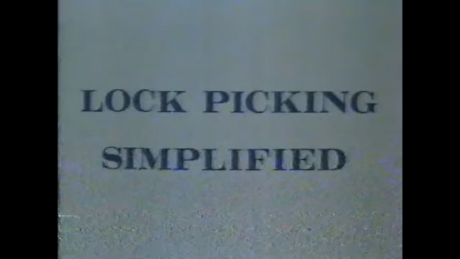 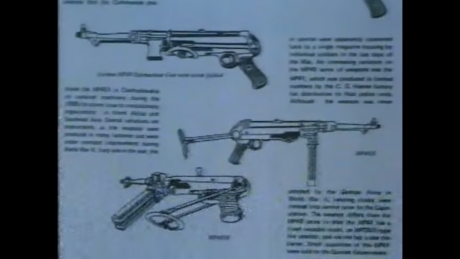 It also gives as a glimpse into the diverse survivalist heavens that have sprung up, camouflaged as neighborhood shops dealing in: pamphlets, brochures, manuals self-defense, ninja training, HOW TO build a fortified bunker, food storage lessons together with supplies, dehydrated food, first aid kids, camouflage gear and WEAPONS! Books about, lock picking, sniper and assassination squads or wire tapping abound. It feels as if the Watergate affair was itself entering the common parlance, it was itself being turned over and reverse engineered into a larger DIY ethos that also (let’s not forget) comprised the early H/B culture or with it’s antecedent the phone phreak, phreaker or phreaking subculture.  It’s a world that’s being ‘primed’ for the self-made, the no-welfare of the individual lone wolf. In fact the crazy ones, the dangerous ones are recast as the unprepared who might become a burden on the survivors or let themselves at the mercy of larger-than-human forces. 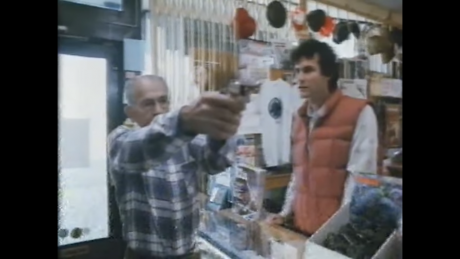 The whole clientele of the survival shops seems to be aimed at largely white middle class public – ready to arm up, inculcate a sense of urgency and gear up for the purge. The level of explicit brutality and violence seems to have risen since the early Steal This Book manuals and Earth Catalogs of the 60s, that had another definition for survivalism and were more easy going and largely trying out mutualist or parasitic strategies to live off an existing and operating system. The move towards survivalism as resilience is somth entirely different in my opinion. Resilience means you’re not just nipping off the crumbs but ready to preserve and curtail privileges to the inner cell and deny them to others that might ‘loot or raid’ you in times of dear need. This is not a world of plenty but unequal distribution they are preparing for but for a world that has out-spent itself and is determined for austerity and last stand attitude.

All are being pitted already – inside this subcultural setting – against the weak, the naive, the untrained, the non-militarized citizens that are supposedly – more at risk and putting everybody else at the risk of catastrophes. That ‘unprepared’ mass (in their perspective) turns out to be a real burden and danger – that is, a strong motivation for personal rearmament. As nuclear detente was being slowly pushed btw East and West, the US seems to be rife with a new kind of trigger-happy closer to home rearmament (if Star Wars can’t help then only me and my family are the best defense there is). This scenario seems to come out of the Twilight Zone episode The Shelter with a difference – the fact that this episode talks about how even a fake emergency situation manages to kindle pent-up racism and rend apart hoods and plunge everybody, even former friends into a suicidal strife. What I’ve tried to trace out is a darker convergence btw mainstream media outlets (such as VHS scene and Hollywood icons – just think Rambo or Chuck Norris) and the busy DIY underground subcultures of the 80s.

There is also this cosmic side to it – where Immanuel Velikovsky neo-catastrophist theories (who is used as a quote in Invasion of the Body Snatchers) is the heterodox voice that links terrestrial history to our cosmic neighbors and more to the point – to the biggest of them, the antique Jove or Jupiter god of gods, the gigantic gas planet that protects us from large meteorites and everything hurled at Earth from the outer rim. Velikovsky used comparative mythology to argue that Earth came in close, catastrophic contact with planets such as Venus or Mars in ancient times. The Jupiter Menace situates threat of annihilation at various levels, from the underground earhtly forces, to the social and religious earthly realm and then moves to the cosmic extra-planetary or planetary plane. Sadly the movie on youtube got removed and now it seems really hard to get by.

To me it is immensely interesting how what came to be the Californian cyberdellic counterculture evolved along side this doom- driven brethren. 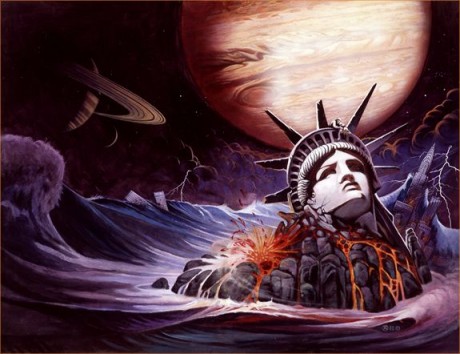