The Lift is an incredible slick horror, neon-drenched 80s movie, perfect for late-night watching by dutch director Dick Maas [Amsterdamned 1988]. I would associate it with such weird midnight circuit movies as X-TRO [Harry Bromley Davenport 1982] or new flesh Videodrome – a style celebrated by Panos Cosmatos in Beyond the Black Rainbow. 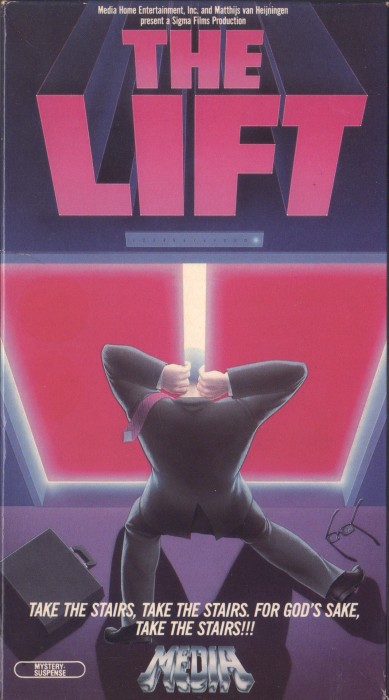 The Lift gives me the opportunity to move further into the den of technological conspiracies, black boxing, influencing machines at work beyond the shiny smooth surfaces of current tablets, touchy interfaces laptops, self-driving cars and Google Glass our dearest life support equipment. An opaque mirror that hides the levers, the circuits, the silicon wafers, without which current algo-capitalism and techno-civilization would grind to a halt. We need to explore further the nexus of elevators as entry points into ascending (or descending) investments & beliefs, industrial haunts and elaborate world control panels and plots. 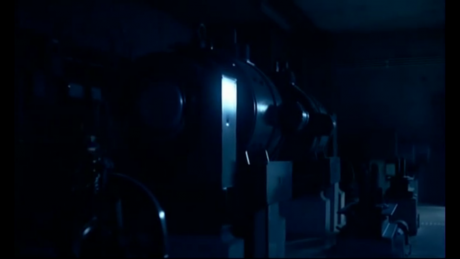 La Conspiration des Milliardaires [The Billionaires’ Conspiracy] (1899-1900) by sci-fi feuilletoniste Gustave Le Rouge is one of my favourite stepping stones of science fiction history – the graduation of juvenile adventures a la Jules Verne to more serious and future present occult concerns. It is also maybe one of the first geopolitical Americanophobe fiction pieces produced in Europe, and not surprisingly and staunchly French. The Billionaires’ Conspiracy lies at the crux of hidden troubles – of the New World against the Old World, of good national (meaning French) vs bad science sell-out (meaning unscrupulous transnational science) with narrative rants against the brain drain of Europe to the States and what conspiracy theorists all over the planet use to call now the New World Order. Gustave Le Rouge (and his collaborator Gustave Guitton) are also listing all the accomplishment of the new brash American East Coast, including skyscrapers and elevators that are the lifeline. Their ire is mostly directed at the new cartels of the American robber barons – probably the first time corporate monopolies got to be reviled outside of the honoured journalistic tradition of the muckrakers. In its early iteration watchdog journalists as muckrakers were the reform-oriented investigators to thread the thin line between populist tabloids and progressive rants, detailing the excesses and squalor of full-steam ahead capitalism. The unsafe working conditions, the political corruption and bribery greasing the system. Gustave Le Rouge paints a monstrous picture but unforgettable image of these ‘captains of industry’ – the CEOs elite who controlled farming and meat-production empires, oil, railways systems and lumber & paper industries.  This new ‘Transatlantic Peril‘ is headed by American Billionaire William Boltyn who uses Thomas Edison’s (Engineer Hattison in the novel) ‘metal men’ (proto-robots) as well as a brigade of mediums to try and bring the world (read mostly Europe) under his spell (notice how and psychic spy medium powers are closely allied to the mechanical-industrial endeavour). In the first volume, Le Rouge described the elevator as both typical modern way to climb the new Babel structures and a tool of economic and social ascension. 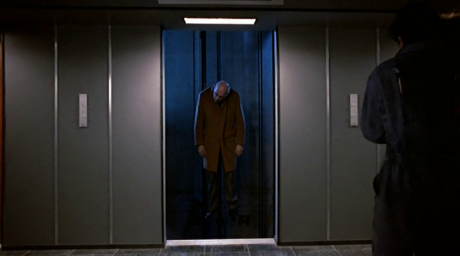 Here at the elevator all these forces conjoin and lift each other with propulsive power. The elevator is already a secular purgatory, a place where one is waiting judgment. The lift is featured in many movies even in the title of proto-new wave Ascenseur pour l’échafaud (1958) where the elevator is a sort of narrative limbo state. It promises redemption but never delivers it’s promise. Being stuck in the lift – the hero can go directly up or down to a very mundane hell. As he gets stuck in his own plot, he descents to his own private hell. Initially he assassinates the boss and his lovers husband and then is stuck inside the system, inside the building when the electricity gets cut. A cascade of events ensues while he is still trapped, world at large is conspiring in various unintended ways and technology is there to cut out any routes of escape, and insure a route to the gallows or worse as in lots of noir fatal affairs.

In the satanist neo noir story of Angel Heart (1986) by Alan Parker, the elevator featured in the opening and closing credits is again an omen of doom – it is a sort of elevator to nowhere, a place where souls incarcerated and get transported to their ultimate fate. The elevator takes one among the shaft of the soul. The fatalism of elevators is pure transcendence in the Thirteenth Floor (1999), a doorway that elevates one to the ultimate impossible interdimensional gateway – the vantage point where one can see all dimensions and realities unravel. Elevators are non-places, empty gaps, where you are neither here nor there yet.When you enter them you are caught up in their automatic routine, in a promise that can always get undone. That’s part of the claustrophobic tension they provide. Many people feel anxieties connected with elevators, many have claustrophobia feelings becose nobody can ever be sure so sure what awaits you on the 13th floor! Let’s not forget the upward mobility potential of lifts.
The lift is also kinetic architecture first triumph – it is the movable room, the mobile interior that cuts trough the building, linking levels, social strata cutting trough hierarchies. It is a powerful embodiment of permeability of impossible jumps. In the collapsing arcology of Ballard’s The Highrise (1975) the elevator(s) becomes a space of initial differentiation; of various lifts going to different floors on various speeds. It is the prised box, a place of initial conflict, of inter-floor class warfare, barricades, gated elites, revenge, payback, of glorious ascension and future putsch. 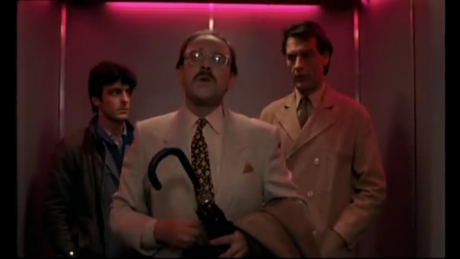 An episode of the Twilight Zone relates an elevator ride that basically links the human with their own experience as non-human puppet state of the showroom dummy. The mannequin existence of humans that trot along floors of retail spaces and corporate buildings merges at night with their showroom models. The elevator is also carrying the curse, it’s a carrier of accumulated bad vibes, and is awash in blood (the incredible blood flood of The Shining elevator). 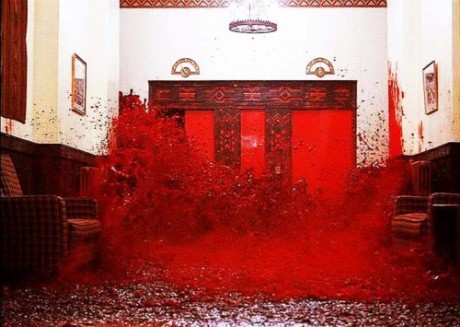 Dick Maas has prepared a Dutch tale with lots of tiny nasty surprises and grand guignol effects (decapitations, hangings and suffocation). The elevator movie is a purveyor of comedic moments (the dancing janitor), tasteless skin flick exploit (the elevator sex scene) all presented in a classy, otherworldly atmosphere of neon light of greens and blues. The Lift is also the story of hidden corporate corruption and also the fears associated with new microchip technologies. Diverging from my previous post on the heavy industry fears, the new aversion against computer- smart- self-enhancing utilities is given flesh for the first time. 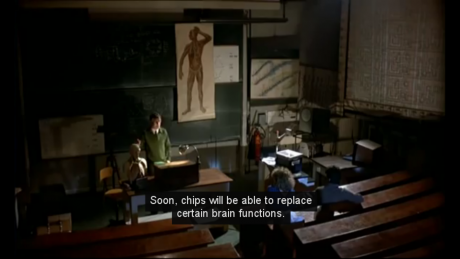 There is a great scene of a university professor holding a lecture on biochips and what could be termed today the Artilect Wars vividly described by Hugo de Garis horizon. I hasten to add that i am not saying that the current debate over strong Artificial Intelligence was anticipated by this obscure Dutch horror film, but that this film is one of the first to voice out an eerie increasing concern with self-replicating pseudo /nonlife, matter-biomatter, neural networks/biological computing.  There is no teleological doom of the microchip Singularity in sight, just the contrary, the disaster is actually predicated on a very fine-tuned, non-resilient new technology. It is error-prone or accident-prone just because it is more sensitive and more responsive, ‘alive’ to outside shocks. The fact that we have integrated what was in the early 80s just a rising trend – shows how much things are here to stay. 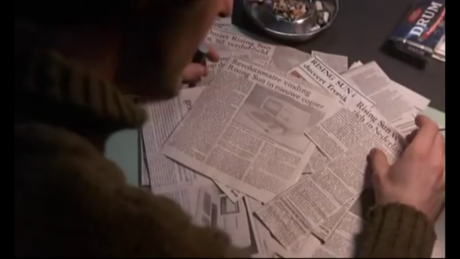 The Lift is a funny little gory tale about elevation and transport to higher levels of computation not playing by the rules, not simply because nonlife hates life or it hates people, but just because it has a mind, an opaque decision process of its own. The ghost in the machine is also very vividly described in a gooey, pulsing obscene mass, bathed in green-red florescent colours, the usual hue of eeriness and abnormal, anomalous happenings. This anomaly is a very powerful indicator that the microprocessor is not just a silicon wafer, but also the future shock collapse of disembodied data processing systems underscoring every aspect of daily life. The lift is a classic key example of ‘haunted machines’, a cunning, persecuting intelligence that plays and attracts its victims down the shaft. An animated presence that doesn’t just accomplish tasks. Important to say that elevators (according to statistics) are one of the safest modes of transport (4 times less dangerous that walking the steps in a building), yet this particular piece of evidence points to a diverse order of disruption, a different unsolved friction. 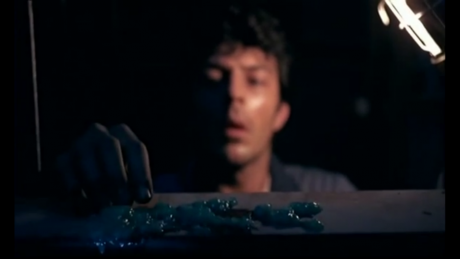 The new multinational corporations and Dutch firms are merging, the new financial accelerated capitalism is betting on various untested gimmicks. In the 1980s we see this in its infancy, even the new lab/microchip plant is situated in an industrial wasteland, there are only skeletons of former industries and the hotels are probably the only hope for the economy. 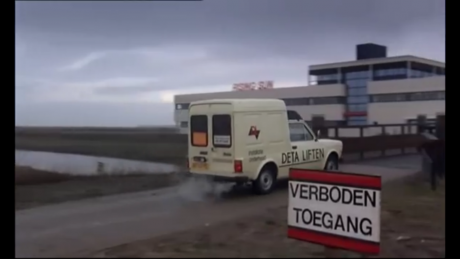 Both the US and Japan (notice the Japanese looking CEO or scientist gracing the wall in the lab lobby) are dangerous allies, purveyors of new and dangerous experimental trends. Although this might be Old Europe talking, there is also an undercurrent of real estate and construction boom speculation. 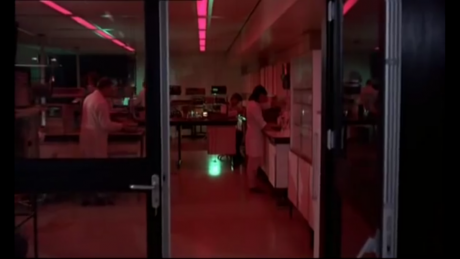 There is a blind guy who pays heavy money and signs a contract for a room with a view – something for his lovely wife, to immediately fall into the pit of the elevator shaft. There are no coincidences in this context-based technology horror, where the mechanic working class hero can hardly repair or do his job and where other mechanics have gone over the edge. Most of the elevators victims are also low-paid jobs, bellboys, janitors etc even raunchy agriculture congress members are also on the blacklist.

There is a new reiteration (a remake by Dick Maas) in 2001 of the Lift called The Shaft/Down set in New York (even if mostly filmed in Holland). I considered this one not a bad remake, and it merits comparison with its 80s original – just to see how the US version/Hollywood is being reworked by the director. The Shaft follows the tricks and quotes a lot its predecessor but also has a lot of new configurations such as the gory premature birth scene with a bunch of mothers just out of pregnancy yoga class. Ex-GIs are now the new mechanics involved in shady technological dealings, in military-industrial collaborations, and the Millenium building cannot be shut off for a major check-up, because it would accumulate(sic) disastrous costs and financial losses. The bosses deem it more important to keep the elevator running at whatever the cost. It all culminates in a prophetic scene where the killings and technical problems are being directly linked (by Swat or CIA) with Osama bin Laden (the production of the movie predates 2001 September 11!) and part of the same Al-Queeda terrorist attacks with direct mention of the 1993 Word Trade Center bombing in New York City. To trump all the terrorist conspiracy talk, something entirely different happens: while the computer brain is being disconnected, it launching its cables like tentacles dragging the mad inventor to his death. 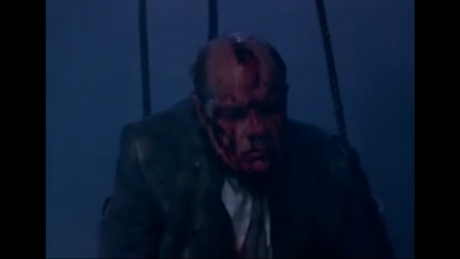