“Have you ever considered the possibility that the machine may be haunted?…Maybe ‘haunted’ is not a good word, let’s say possessed.”Mark

I consider The Mangler an incredible classic of occult human-machinic fatal affair, of industrial sacrificial rites and demonic laundry labour. I would like to follow in a few movies the abrasive, deleterious and mutilating forces at the heart of the man-machine conspiracy. Few movies have had so much opprobrium and injury thrown at them as this US-Australian-South African production directed by Tobe Hooper. Beneath the contrived plot, bizarre gags, the grotesque outer lining, the sheer goriness and phenomenal butchery – there is a tale of capitalist sorcery fomenting and thriving on wrathful production forces and contracts/ownership certificates that function like pacts with the Beast in the Machine. 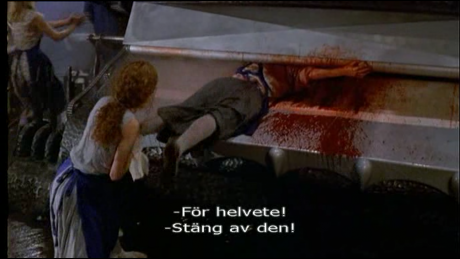 Probably no other movie takes the quaint ol’ infernal textile mill from the prodigious steam industrial age so literal and places it at the coal dust -covered heart of East Coast America. Although machinic demonology is not limited to the Industrial Revolution,  one needs the steamrollers to raise up the dead heavy pistons and dynamos of the steam-age as a true example of hell on earth inside a factory. 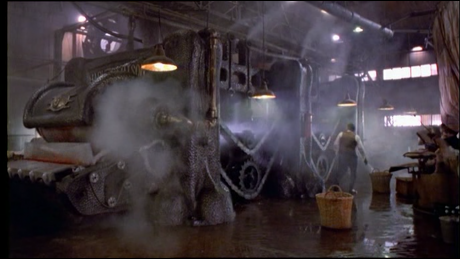 The Old West is obliged to go back to the full powered Industrial Age to bring about the transmogrification of biblical hell into a SWEATSHOP. In Mangler the sweatshop is actually revealed as another name for the butcher shop or the blood shop of history: it is a 666 machine that is asking for more and more cadavers, severed limbs and boiled flesh. 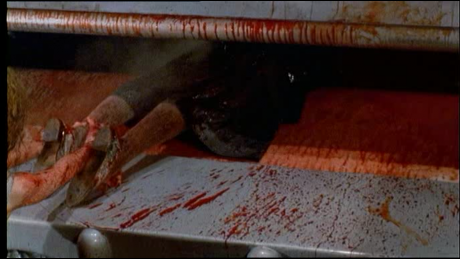 The Mangler is based on a short story by Stephen King published in the celebrated Night Shift collection of short stories published in 1978 for the first time. Apart from his The Mangler (1972) – Graveyard Shift(1970) is another story placed inside a decrepit mill where a huge rat empire has developed and speciated into various sub-species – a veritable rat radiation into various niches forming a self-sustaining ecosystem. There is too much of a coincidence between Stephen King famous horror stories and the incoming era of post-Fordist labour regimes, the 1970s energy crisis, the autonomist workerist movement in Italy and the externalization of the manufacturing to the Third World and China in particular. Another unspoken dimension of the possessed technology in the movie is the laundry and especially the history of Chinese Laundries (*well documented on the extraordinary blog of Mr John Jung). It is worth quoting from this forgotten history:

In the large cities of the East, crowded housing conditions did not allow laundry to be done easily in residences, flats, and apartments. These conditions made it possible for the first time in history that doing laundry became a business opportunity. In a sense, denied entry to other work the Chinese immigrants of the mid-1800s got in on the ground floor of this occupation, which was unattractive to whites. Washing and ironing laundry day and night, week after week, and year after year was by no means an easy way to earn a living but it was the only option available to the Chinese then.

Much of the industrial labour for railroad tracks as well as the low-paid jobs (especially in laundries) was accomplished by Chinese male migrant labourers, migrating to the West Coast after the Opium Wars and the crushing of the Taiping Revolt. The same could be said about the poor Irish after the Irish Famine that migrated to the US. At the end of the 19th century steam machines pressing equipment was putting the time-consuming, coal-heated hand iron out of business, a fact cheered by the racist anti-Chinese emigration politics of the time. 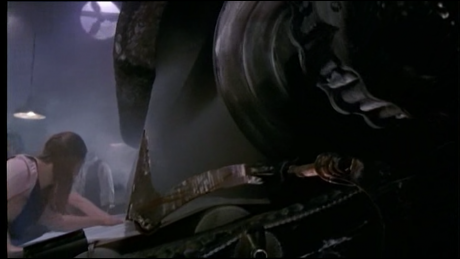 The Mangler shows only white (even if a women majority) as working class inside the factory. While this has been the case in the period of the Industrial Revolution there is a strange anachronistic feel throughout the movie. It is as if in this hidden valley, protected by the dark forces of magic, Fordism and classical Taylorism were being kept alive with tremendous human cost and black magic. In fact this kind of unprotected work in the 1990s or 1970s was only visible in the sweatshops of the third world countries and the burgeoning economies of Asia-Pacific or in South America. The fact that there are basically no non-whites in the Gartley’s Blue Ribbon Laundry service talks about a different exorcism. The monstrous killer (The Mangler) machine that is pressing the white linen (+white women workers mostly) and other textiles is a barely veiled and tardive monument to what was considered an accomplished fact: the closure of most of the old industrial factories/mines in the Western world (or the Late-Heavy-Industrial East for that matter) during the neoliberal upsurge of the late 70s and 80s. 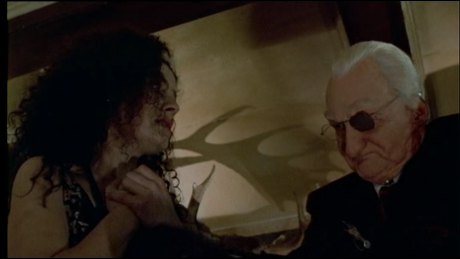 The Mangler is about magically finishing up once and forever with Fordism (this could be a slogan too!) and I consider Bill Gartley (played by Robert ‘Freddy Krueger’ Englund) a sort of late demonic inheritor of both Henry Ford and J.P. Morgan harkening back to the heroic if infamous ‘robber baron’ age of Monopolist Capitalism. I consider the Mangler a success in the sense that it demonstrates that neither closing down the factory nor waiting for beneficial upgrades is a frictionless or a safe option. The Mangler is also an industrial ghost detective story with a very down-to-earth but possessed police officer, a guy who believes that there are only “country, God and law” (reality) and – everything else is “bullshit”. 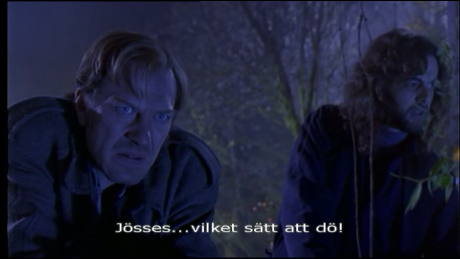 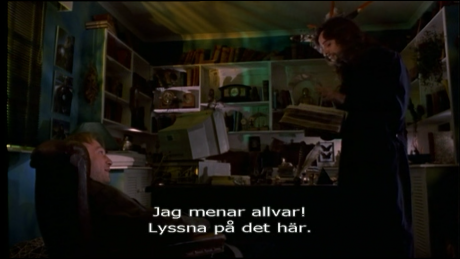 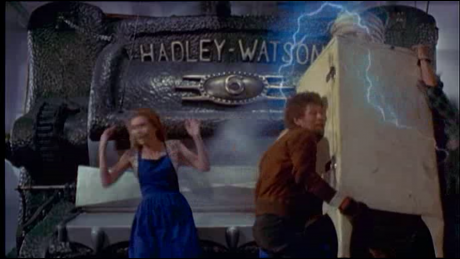 Taken as literal as the movie puts it – the true curse and haunting of the heavy machines outlives their use in a sense. This curse is exemplified as a remainder, as an energophage residue that makes it across the threshold from Fordist damnation to post-Fordist doom. Mark, the cyberdelic exorcist of the 90s that sprinkles the old industrial “6” numbered machine with holy water is reading from The Golden Bough(first published in 1890) by James George Frazer (1854-1941), a book retitled A Study in Comparative Religion or A Study in Magic and Religion.  In fact in following the evolutionist paradigm, James Frazer had separated magic from religion, considering ‘sympathetic magic’ a sort of false logic or false science, a primitive understanding of the universe that has outlived its use. A barrier on the way to more and more complex spiritual ideas – and towards the lofty realms of positivist knowledge. Never is there magic allied to a certain commonsensical cunning or to the sheer powers of survival in a bleak world. In another dialectical (and also alchemical) reversal, the old magic came to be associated with both cutting edge technology as well as derelict remains of the industrial age. Andrew Lang (a contemporary of Frazer) argued against such a linear Comtean trajectory, and for a different understanding of superstitions – not as misreadings of normal natural fact, as pure hallucinations of “the dull, the weak, the ignorant (…) who constitute, unfortunately, the vast majority of mankind“(James Frazer) but as something that registers the tremors of the present. Superstitions for Andrew Lang(in his anthology of ghostings old and new – Cock Lane and Common Sense, 1894) had the potential of being derived correctly from ‘abnormal’ facts or responding  to the unusual and yet unfamiliar situations: even as new concerns disguised as old haunts. I am basing my speculations regarding The Mangler movie/story on such a particular interpretation of folkloric knowledge, psychic occurrences, urban legends and pseudo-scientific beliefs as discussed in the chapter Andrew Lang: Psycho-Folklorist from the The Invention of Telepathy by Roger Luckhurst(Oxford Press 2002). The 19th and 20th had a continuous and relentless boundary-crossings between science and pseudo-science, with superstitions and the occult working their magic directly from the very rich humus of downgraded, debased knowledge heap (what Luckhurst calls ‘doxai’). 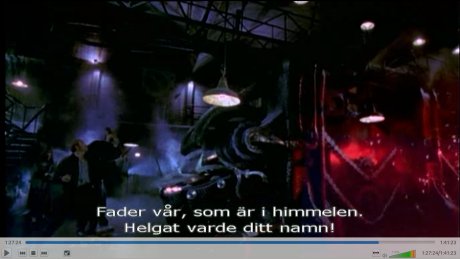 Romania abounds in orthodox priests sprinkling holy water on new cars, personal computers and other appliances of the modern age. There is a similar ritualistic dealing with technology among the Buddhist countries with monks blessing mopeds and cars. While it might sound completely anachronistic (not so say blandly consumerist), please take the time to ask yourselves: why these technologies in particular and why the clash? Propitiatory rituals act almost like safety trials and tester environments, as domestication ceremonies of the very latest, of the things that are at the core of the capitalist post-Industrial life. In a very funny reversal, Frazer becomes an unlikely ally in the separating between official religion and (black, industrial) magic, and what is very important is that we are very far from the possessed bodies and swarming pigs of traditional exorcisms. Herbal knowledge (belladonna Nightshade family of plants – known for their toxic and curative powers) is to be found in modern pharmacology, hidden in daily antacids – the symbolic spell of acidic/sulphurous times.  Both the detective and the old workers (the first victim) are prone to acidic stress and stomach ulcers and thus to their pills – as is known from many other stories and movies. Here we are on the ground of a biomedical reality that crosses temporal or species boundaries – industrial life is also feeding into pharmacological painkillers and tension- easing drugs, substances that have been always around and available to people or for that matter for animals that self-medicate when in distress. 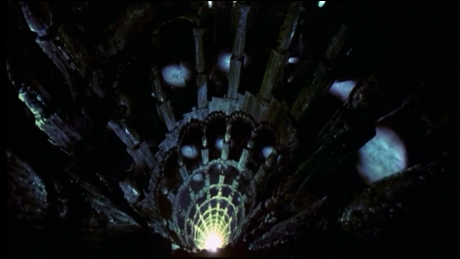 The machinic possession spews fire & steam, it is dragon-like and the factory is its ghastly dungeon, but has its own particular characteristics, it transforms and mutilates bodies, taking away limbs and exchanging them for prosthesis, but it also deeply involved in incestuous dynastic successions. Patrons or CEO kings must insure their succession, the old rite of Spring and the Golden Bough is replayed in a completely steampunkish atmosphere – the must die thrown in the bowls of the machines, in order for the successor to take hold of the button of the engine. There is also another sort of succession going on – the succession of managerial styles, one is being baptized and mangled(scarification?) into the new management.