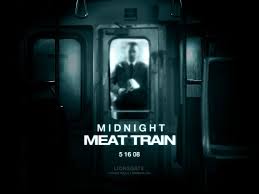 This is a movie made by Ryuhei Kitamura. Kitamura achieved a cult following with this chanbara sword play and zombie Versus and many manga movie adaptations. Midnight Meat Train appears to be an overlooked midnight hour gem – a glistening citified movie based on a short story by Clive Barker written in 1984. I was hunting avidly after the (too few!) movies based on Barker’s oeuvre. This one came completely unnoticed to me. There is something razor blade-like in the way Kitamura deals with the NY subway and surfaces, turning the city into blueish metallic, greenish pistons and operating table. Kitamura keeps the city clean only to be able to splash body parts and gore on an industrial scale. It is a movie I would pair with that absolute high of the subway horror genre- the Hungarian Kontroll (2003) and Canadian apocalypse of End of the Line (2007). What is it with subways in our 21st century cities (those who have them, or those who have an old ever-expanding labyrinthine network)?

Subways are the proof that vertical growth is definitely not enough. Subways grow like varicose or hemorrhoids. They are all ways in which transport vessels or tubular outgrowth out-compete each other, stop paying lip service to the city above that is in the end just an excuse for more channels and deeper subways lines. The Midnight Meat Train is about a ghostly late-night train that acts as a proxy for darker and proto-human forces. I loved the movie because it again (in a Candyman manner) invariably implicates the protagonist much deeper and more fatal than a modern, enlightened, scientific/artistic pursuit might allow. The informal fishnet of legends, forgotten news stories, rumours, apparitions and urban folklore traps and subsumes the initially reluctant and steadily more obsessed photographer hero Leon (played by a clean and gullible Bradley Cooper). He is trapped in his own spiral of fame, more realism and journalistic laurels. The circularity of it, the conveyor belt design of the story makes all move out (*out of the subway, out of the city, out of the nightmare) less and less probable.

The actual antihero is played by Vinnie Jones – usually typecast as criminal, hooligan and truly brutal assassin. Vinnie as Mahagony – has a strange and difficult role to play: a white collar butcher. A barrel chested butcher that literally looks like a financial investor + his bodyguard in one. His dress is without blemish and his only true giveaway – a ring with an eight pointed star & a hideous meat hammer and hook. He also sports some very strange jar collections in his bathroom: full of bizarre, disgusting swellings he excised from his own skin. 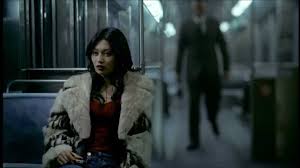 He is a silent and infinitely patient stalker, incredibly meticulous and deadly. There is a time lapse scene in which he just sits down during bustling hour to be left nearly alone and unmoved in the same spot at the end of the day. During the daytime job he is dispatching animal carcasses and during the nighttime he takes care of all sort of lost and late-night passengers, black or white, female or male, in groups or alone. He is not very choosy and apart form the fact that he has an unnatural ability to bring death among his victims, he doesn’t talk very much. In fact he is one of the most silent and non-verbal killers in the history of cinema. 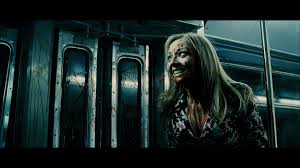 In comes the photographer Leon, a vegan (pun intended I am sure), an up and coming young artist that is being trained and coaches by uber hot sexy and ruthless curator/gallerista (aren’t they all?) played by Brooke Shields (remember her from Blue Lagoon??). As a consequence he is starting to look for the danger zones and award winning shots. I really liked how in a Blow-up fashion he starts gathering in his red light room all these disconnected and conspiracy-laced bits of information: people that he manages to see and immortalize before their last breath and photos of pissed off slaughterhouse employees as well as recurring names over long time ranges.  We usually get to see in incredibly detailed slow motion what he doesn’t get to see – a blood splatter orgy that literally rains with body parts, and meat hammer blows and flying eyeballs! The ending is truly Lovecraftian – I don’t think I’ve seen a better ending recently – the scale and cosmic inevitability of it is not worth spoiling it. So watch it and please watch out for that last subway because it is travelling for the end of the line and for the end of time. 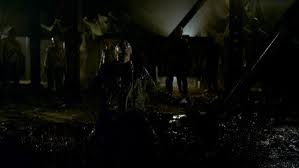