It is impossible to asses here or gauge the impact of Fordist “efficiency experts” and early scientific management engineers Frank Bunker Gilbreth Sr (1868-1924) and his wife Lillian Evelyn Moller on our lives, in their quest for increased output/minimizing downtime PLUS minimizing injuries and accidents to the workers. Their demonstration that rest-time(unemployment?) is actually improving productivity embody the contradictions inside the culture of nascent scientific management and their respective innovators. Gilbreth’s Time and Motion Study trough visual means tries hard not to be “an unstoppable” force, it tries hard to show that improvement in working conditions can go hand in hand with higher efficiency. While it works on that, it also emanates a highly abstract notation, an ‘alphabet’ of selective movements, almost echoing the belief (of Russian Utopian avant-garde such as UNOVIS) that geometric shapes laid bare by industrial production, in their mathematical interrelationships could bring about a reconciliation btw modern human beings and their new environment(after Susan Buck-Morse Avant-Garde and Vanguard 2006).  These movies also aquire a post-factum integrity, a new continuity that omits the fact that “Original Movies of Frank Gilbreth” were compiled by James Perkins and Lillian Gilbreth after Gilbreth’s death in 1924.

Their efforts where responding to reports of abuse, and are a proof that higher and higher profit margins in the new machine age were imposing new ideals as well as reacting to tremendous strains and pressures on the human workforce and automation of labour. Human movement was aesthetically re-arranged and cut down to smooth essentials in lockstep with technology, exactly like components that had to be re-arranged and prearranged for faster and more efficient assembling on the assembly lines of factories. Both living machines and industrial motors where failing under strain and higher non-stop production times, each at their own pace. Their initial use of his children/large family for experiments (there is a biographical book called “Cheaper By the Dozen” about this) are almost schoolbook examples of how the private got incorporated into larger public concerns permitting increasing overlap with the experimental management – the large family was probably better equipped than anyone for testing conditions and improvement values on a new generation of future workers. The new century’s kids where collaborating to improve working conditions farther and farther away (in time?) from the family cell under the watchful eye of supervising parents and their cameras.

Motors were mounted on Motor Jacks to allow quicker assembling times and higher performance. From Gilbreth’s initial (even paradigmatic) motion study of bricklaying, followed a gradual ergonomic approach and expansion into all fields of industrial era human activity, from construction sites to better tagging for easy data access in office rooms (+improving keyboard design for faster and more efficient typing), to hospitals (position of helper “caddy” to a surgeon, who handed surgical instruments during operation) and into the war zone (teaching young recruits to rapidly disassemble and reassemble their weapons even when blindfolded or in total darkness). 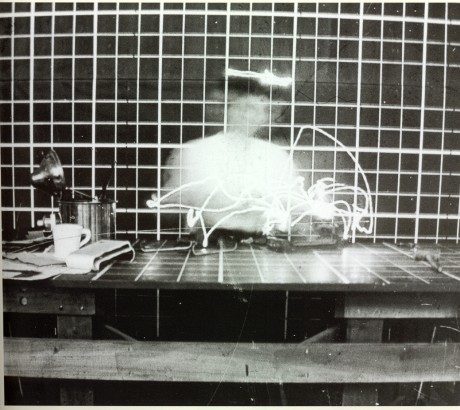 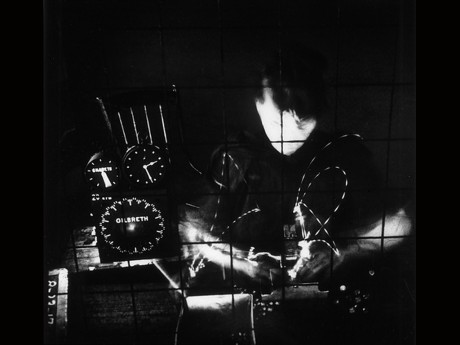 CYCLOGRAMS: light painting studies and the hidden shape of movement

His systematic and mechanistic approach to movement was doubled by his use of new camera techniques to mark and make visible and amenable otherwise invisible/uncontrollable movements, to slow them down or accelerate them according to educational and analytic need. For example he made movies by filming in semi-darkness workers having small attachable light bulbs on their fingers – just to be able to ‘model’ the entire workflow of movement (apparently he is also a pioneer in workflow charts). A cyclogram is (according to a Merriam-Webster definition): “a photograph made by taking intermittent exposures of a moving object to which a light has been attached and serving to project the motion of that object in dotted curves “.

He used the new tools of cinematography and electricity to mark up,  document and then intervene in eliminating what he deemed unnecessary and injurious excess or waste movements (defined in relation to both the productive process and the workers). The culprit “waste” movement was caught in the act, it was isolated and analyzed.

He could then model and extract just the abstract circular movement from start to finish, using just simple wires and simple checkered ‘3D boxes’ that almost look to me like retrofuturist versions of holodecks or cyberspace environments. Even empty space is being segmented, measured with intersecting coordinates. You’re actually looking into something very similar to the TRON ‘The Game Grid’. The first step is resolving space itself and then this will become the antechamber where bodies get ‘rez-ed’ into the system. These boxes would be used to demonstrate how good flows of skilled workers (but also sportsmen as in the New York Giants pitching skills) are more rounded, more smooth and contiguous and how they differ from the less skillful movements that are characterized as “jerky motions, many hesitations, abrupt stops, changes in directions and were irregular in consistency”. 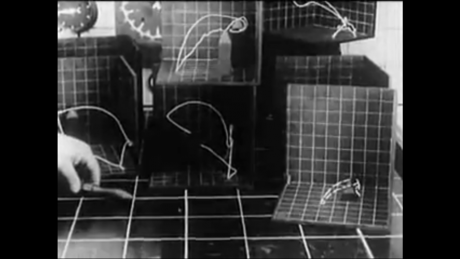 Scientific study started with numbering (A, B, B and 1, 2, 3) and a new vocabulary for areas of work that were generally unregulated or previously non-standardized. Into the chaos and jerkiness of initial labour, there came a new ‘hard’ study of smoothness that divided and calculated everything in time cycles. The cycling rotational stopwatch is present in all the movies, it is a reminder with all its dials of the micro-pressures of new deadlines, and a continuous improvement revolution (not only revolution but also in the sense of revolving excess, of going around the clock), an endless Moebius band of efficiency: the real unifying force behind all these varied activities. The stopwatch or manometer were the new unchanging correctors and godly supervisors present in all places and measuring all activities. Glow in the dark cyclograms  were registering cyclical nature of time. This makes time measurement somehow even more inescapable, converging and converting all movements into BIG DATA of numerical arcs and new hieroglyphic vocabularies able to code optimization into self- quantifying body postures and hand movements.

Repetitive work is being also improved, but while it is being improved it is being inserted into larger repetitive improvement practices – such as teaching workers (or soldiers) with screenings of their own work being filmed and decomposed into elements. It also takes as inevitable the push to outperform previous methods as obsolescent, actively hunting for old movements as deficient remains, as residues of non-productive waste. In a sense the Time and Motion study cannot be equated just with living or dead labour but has to be put into the context of changes about thinking about higher debugging of every possible activity from the most apparently innocuous polishings to the most destructive/killing output to include troubleshooting (for real!) machine guns in the field under high strain and continuous fire. After the Russian October Revolution of 1917 – the methods of both Taylor and Gilbreth were eagerly embraced and by such “iron messiahs” of machinism and man-machine harmony like Alexei Gastev at his Central Institute of Labour in order to transform the world into a “machine paradise”.

At the start of our 21st century stopwatch Gilbreth’s paired concern of both improved working conditions + higher efficiency seems completely out of joint, with the new efficiency austerity multiplying concerns about worsening work conditions and even the ‘unchanged nature of work’ at the heart of the warehouse universe. The logistic nightmare that is part of the current big retail and online order business tries to increase automation while work benefits and fair compensation is nearly absent. Warehouse robots such as those provided by Kiva Systems are introduced into a space anachronistically riddled by inhuman conditions in the vague hope of changing those very conditions, while low paid ‘warehouse wage slaves’ labourers struggle to keep stringent quotas at Amazon or Apple Chinese factories. What is ultimately on display is not only waste movements, but also the continuous production of excremental excess as human per se.