The Relic is about what actually happens when ‘Indiana Jones’ returns back from the temples, the tombs, the jungles to civilization under the spell of “curious or menacing objects”.
Peter Hyams is top on my list of directors just because he’s behind both The Relic and A Sound of Thunder (2005). In a sense both of them evolve and devolve around cursed relics and temporal or biological drifts and distortions. A Sound of Thunder is built around the cascading ripple effect of anachronic ‘out-of-place’ objects and beings – such an ancient paleo-butterfly(hence the ‘butterfly effect’) that gets killed in the prehistoric past (Grandfather Paradox) by accidental intervention (with the help of a time travelling agency) and then gets smuggled (also unwittingly) into the future messing up the causality chain of the present. It is really a pleasure to be able to tease out some of its most ominous and disturbing aspects of these unruly narratives. As probably many others in 90s Romania I watched The Relic on late night German channel Pro7. The Relic (based on a techno-thriller novel by Douglas Preston & Lincoln Child) is a roller-coaster creature horror movie with multiple intrusions across various temporal, material scales and physiological-occultural(bioccultural?) layers that are usually kept apart (ritualistic, cognitive, xenohormonal, neuronal, museums/theme-park, survivalist, fictive/nonfictional, superstitions/science, biological/spiritual, mutagen, species, extinction level, belief systems/reason, premodern/modern). 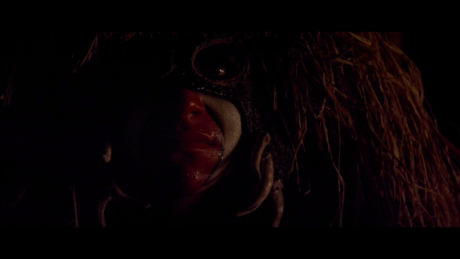 At its core lies a myth of an Amazonian tribe – a lost tribe and its guardian spirit – the Kathoga. In the whole classical colonial and imperial literature (Rudyard Kipling, Rider Haggard, Sir Arthur Conan Doyle) there is a lot of ‘lost’ worlds and ‘lost’ civilization or tribes. The lost or forgotten are actual or imagined extinct or disappearing cultures. “Lost” has had a specific utility in imperial narratives – rewriting and legitimizing a lot of interventions into local archaeology and history. For example ensuring that the lost tribes or civilizations would act as “lost” precursors to the ‘true’ (and mostly white) forgotten (be it Atlantean or Lemurian) roots. ‘Lost’ was also coding the genocidal interchanges and extinction level events in areas where the local populations was brutally eliminated. A lost or missing narrative or book was also a licence to improvise, to modify, to intervene and smuggle in new information as true information which was considered lost or forgotten. In a sense most novelty smuggles itself across strict traditions and disciplinary divisions this way. Most apocryphal or esoteric materials, from a majority of written cultures (Europe to Near East or India) emerge into the world brought from forgotten remote valleys, from hidden caches and well-kept secret places. This is how they get eventually included into the DNA of already ‘revealed’ canon – in the guise of (old) lost or forgotten knowledge.  These artifacts also exhibit “plural temporality….[the] doubling or bending of time…[the] cultural project of time management,” and “the temporal instability of the artwork” (Anachronic Renaissance, Nagel and Wood 2010:8, 9, 10). 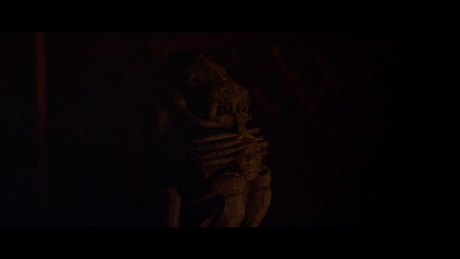 The fictional South American tribe Kathoga is literally a lost tribe in the sense of the majority of indigenous native tribes suffering from extinction along with their dwindling natural environment on the Amazon. In periods of trial (attacked by enemies of larger force) they undergo a sort of retreat. They basically hibernate and hide inside the jungle while a monster demon is summoned. The lizard god Mbwun (“He Who Walks On All Fours”) a guardian spirit (‘demon’) launches the overkill while they hide, destroying their enemies. This lizard god is also represented by a stone idol – a statue representing a non-human monster holding a human heads in its jaws/claws. An Anthropologist from the Museum of Natural History in Chicago is being given a strange gruel made from the leaves of a local plant. The ritual around it invokes the monster(itsy bitsy Spoiler Alert!). At first he falls in a trance-life state that gives him visions we are not able to see – then we see him trying to get hold of the crates shipping the idol artifact (The Relic) back to the museum. He seems desperate and tries in vain to identify the crates as if his life depended upon it. 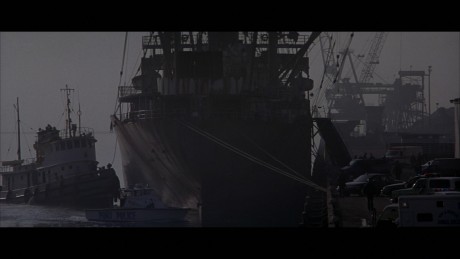 The ships eventually lands in the US, and the police is trying to understand what went wrong, why the whole crew is suddenly decapitated and brutally mutilated, everybody associating it with drug-related violence.

Change of scenery – in Chicago the Museum of Natural History is planing a huge exhibition on “SUPERSTITION” and a grandiose opening that is aimed as a fundraiser and VIP gala. The whole exhibition is about various superstitions from all ages and all cultures. It is basically the theme-parked spectacle of reason triumphant over superstition at the same time a reason still titillated by animated, staged ‘beliefs’. From black cats to mirrors, umbrellas – and including the belief in spirits, ghosts and the netherworld, rational supremacy is still thrill- and sensation- hungry. In a sense, a lot of the sacred relics have been spirited away to Western Museum and there they have developed a life of their own. Lots of cultures where plundered during the Imperial era, lots of cultures got preserved inside Museum vaults and transformed into pop-icons and supernatural fiction plots. The “recursive”(Luckhurst) persistence of occult imagination has trumped most rationalistic exorcism, right in the midst of research labs and display cases. Already existing as a simulacrum – as theme park – various cultures and their ‘superstitions’ have developed around lost civilizations, or fabled cultures (such as ancient Egypt). Superstition works at a distance, even if it’s exhibited far away from home, even if it is dissected and faked inside a Museum guided tour. Far from being quaint about forgotten fears or behaviour codes, superstitions seem to hold a dark survival value especially for the Chicago PD Vincent D’Agosta. The South American Relic is brought at the Museum as a prized artifact of the lost tribe, while the initial discoverer – the Anthropologist is somehow gone, lost after the Kathoga tribe gets rediscovered. Evolutionary biologist Dr. Margo Green(if we count out the creature who is the real horrific centre of the story) hero(ine) of the story. In fact what she discovers is that the crates containing the new plant species from South American have a strange fungus growth. Analysis of the fungus reveals a cocktail of xenohormones able to provoke incredible metamorphosis effects (basically crossing species barriers and chimerism) into super-predators under what is dubbed as “Callisto effect”. 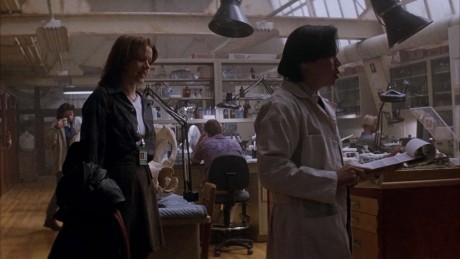 Xenohormones are a group of either naturally occurring or artificially created compounds showing hormone-like properties. Xenohormones such as xenoestrogens are widely used industrial compounds, such as PCBs, BPA and phthalates, and they exhibit estrogenic effects on a living organism, even if they differ from the estrogenic substances produced by our own bodies internally. There have been wide concerns about the release of these substances from by the biochemical and plastic industrial runoff into the environment. The Relic targets the natural occurrence plant-derived xenohormones such as the phytoestrogens or the mycoestrogens. The effects of extraneous (endogenous – out of the body) estrogenic substances are clinically significant because they can mimic those very substances involved in precocious puberty, also responsible for secondary sexual characters or certain functions of the reproductive system. In fact they strike where Westerners are still culturally and biologically very sensitive – in their fear of impeding extinction, ageing populations and lowering fertility rates! Anti-baby pills were initially based on hormones synthesized from the Mexican yams plant in 1951 by Carl Djerassi. 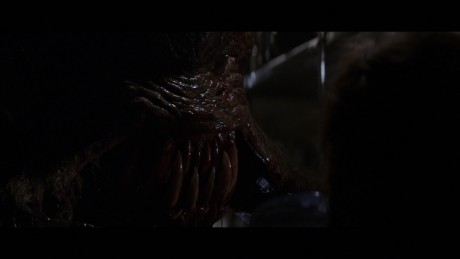 I made this big developmental and hormonal parenthesis to show how the movie is bringing to the fore the incredible plasticity and mimicry found inside both the natural and the synthetic world.  Of substances (at least in their effects) that do not respect traditional concepts of species, individuals or sexes. They appear as mainly disruptive (as the wiki page identifies them) especially in what is considered their ‘natural’ form, as they are being produced by ‘mere’ plants (phytoestrogens) or ‘mere’ fungus (mycoestrogens) not by our own lofty bodies with a developed consciousness and purpose. These substances are somehow ignoring our own snobbish uniqueness and integrity. This is the level at which Superstition works its way trough the movie at the both higher level purposes and basic chemical and invisible level of molecular evolution and hormonal mimicry – this time triggered by simple ingestion of an Amazonian plant. That plant and its parasitic fungus has an incredible hormonal and developmental potential – one could say it’s combining the entheogenic function (generating the divine within) with their primary theratogenic potential (generating the monster within). The weird but very significant science of the movie argues about the release of this natural cocktail of xenohormonal substances inside the bodies of scientists themselves (or any other animals, insect etc scuttling around) as an evolutionary scrambler. The end result is basically a naturally occurring plant with substances able to change, direct or modify morphology and ontogeny – turning individuals into living bio-weapon against their own species. A monster that has to supply his hypothalamus with new hormonal supplies from other brains. This is the terrible curse of the lost Kathoga tribe – their cursed legacy. 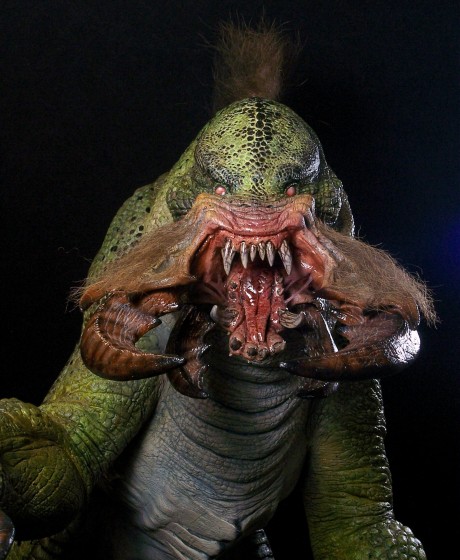 The Kathoga are foreshadowing in their forest jungle world the terrible circular wrath mechanisms of hidden jungle bioweapons and yet-to-be-discovered monstrous becomings. The monster is basically left loose inside the Superstition exhibition in the Natural History Museum of Chicago. The Museum exhibit is not the passive, friendly Imperial Archive – classified and pickled in their jars. The ‘specimen’ is OUT of its geographic or fictional context. Apart from the incredible thrill and mayhem produced by the monster I consider it one of the first demons that stalk the contemporary museums, making victims from those who ignore or deride superstitions as anything but entertainment, past, ridiculous and primitive. In a sense the monster has the power to reconvert species into each other while nobody is watching. It can exchange both genomes and scary narratives – and give flesh to mere superstitions. As a curse it is so vicious, becose it is a curse directed at the very establishment, inside the world of grants, laboratories and conservators and onto the trustees and financial backers of the Age of Reason. I cannot forget how we actually see the anthropologist transformed into his own work. He finds himself transformed into the enemy of the tribes enemy. He is a scout of Capitalism but also the patient zero. The sorcerers apprentice facilitates and enables the curse to find its way home. The bio-prospectors and traffickers maybe the ones that acclimatize not just new species but new worlds, they are introducing us to new biogeographies and future evolutionary landscapes.