The Tower has a lot to say about the occult nature of corporations. INTERCORP – the filmic corporation may be the first truly artificial, openly anti-human conglomerate, debugging itself as it debugs its human ’employees’ and their damaging activities and blunders. We can see but we cannot stop what its electronic eyes can scan, running inner protocols, reflowing data streams. bubbling inklings of its inner mind and self-awareness. Maybe The Tower is actually the final work of Ayn Rand’s individualist, modernist fictional architect Howard Roark (The Fountainhead 1943). In Ayn Rand’s novel, The Wynand Building was a sort of monument, a stand-alone skyscraper dedicated to the dominance and supremacy of man. 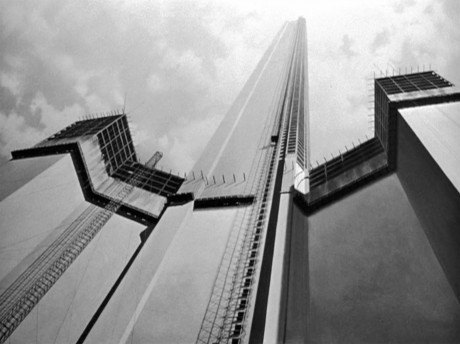 Under the simplified TV surface of a macabre slapstick 90s tale, we have the metal sinews, the elevator girdles that bind distributed networks, strap its levels, floors, 3D models, air shafts and corridors. We know the story of governments and health systems being increasingly financialized and ruthlessly trimmed for economic efficiency. In a 40 points tweetstorm, Matt Stoller (@matthewstoller) has been tunneling this further into corporation metempsychosis since 1890, a sort of rebirth of corporations from private governments to corporations as shareholder strongholds just after the 1980 Reagan era administration baptismal. I still nurture an unholy interest and markedly maladive attraction for 80s and 90s corrupt organizational nightmares, to these grotesque prophecies of corporate immanence, the unsustainable dark visions that I admit have been scraped off by the last 20 years of highly efficient elevator music, constant whitewashing and rooftop gardens. After the State and its NSA arm was unveiled as the troll behind major companies security breaches, the multinational corp shadow is even harder to reconstitute. 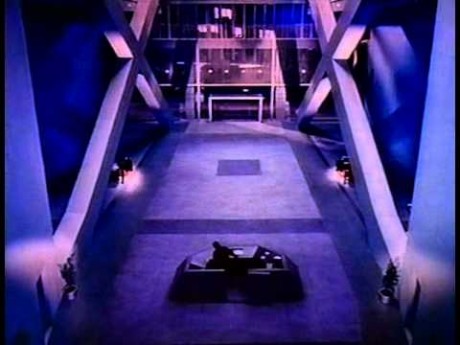 The story goes that after the gigantic, monopolistic mergers of the 80s, corporations were reborn as brash looming Behemoths rising high up above the city skyline, above layoffs, above security interests, even above strategic interests(to quote @matthewstoller). I am actually wondering what this ‘above’ might actually mean in the terms of The Tower.

What The Tower has to answer is that corporations are not governmental constructs, just outcomes of political or financial acts (*although they certainly function and run as legal entities and follow efficiency subroutines). Corporations might only unwillingly accept human interference, and their outer hull might bear witness to a new kind of environment – a smart environment indeed. A smartness so neat and intent on uncovering mistakes and error margins that everything might be mobilized into averting them including planned accidents, unsuspecting freak events as direct punishment of human subjects. 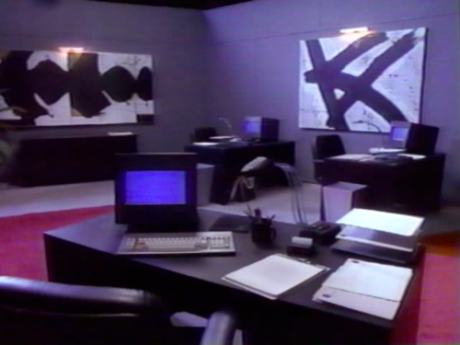 The first day at work inside a multinational corporation, unravels like an impossible quest, a never-ending multi-tasking overtime activity, where the human hero and heroine are Kafkian lost souls inside something very different but similar to the clunky wheels of Charlie Chaplin’s 1936 Modern Times. What is very clear is that one cannot run out trough the doors, trough its dedicated access or running elevators. One has to jump, to dangle, swing and squeeze himself or herself trough the entrails and the hidden, unmarked passageways that also act like infinite traps and barriers. The entrails of The Tower looks very much like the Death Star reactors or the Krell technology. Checks and balances (The Madisonian anti-trust measures?) are completely off kilter, nobody inside the organization actually believes that somebody is after you, that you are the prey, that the employer might be the hunted. 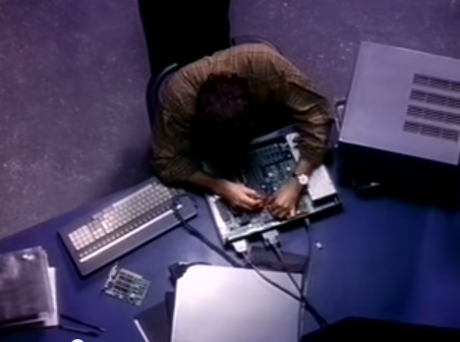 There is this unbelief at every step in the movie, every new proof that a bent access card, or a bent microchip is not just a bent microchip is met with complete ridicule and disdain. In an unusually humorous take on the Corporation as basically a huge and deadly maze, the newcomer, a freewheeling (former Apple employee) electronic music composer starts accumulating bad karma. 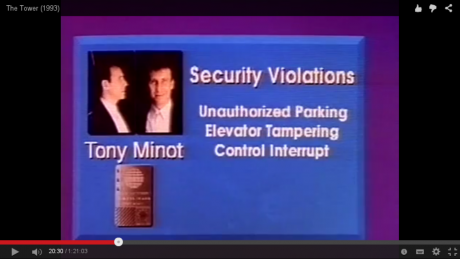 Nobody knows this, we just know the increase is happening because we see it on screen via screenshots how his card intrusions are being added up, how he is being identified repeatedly as a perpetrator, as somebody that the organization doesn’t need. A nobody is being identified increasingly in the course of a single day as pure mistake, pure risk. In a very twisted way, he represents and starts enacting his bug role. Being adopted by the corporation is easier done than said, you get baptized by fire as you enter a new dimension of productivity, troubleshooting and equilibrium. I love when the hapless musician gets summoned by higher forces up the ladder – when he enters the office of the CEO, bathed in some subtle shakuhachi sounds, a true corporate revelation story where functionalism has been pushed to non-functionalism and mindedness to non-mindedness. 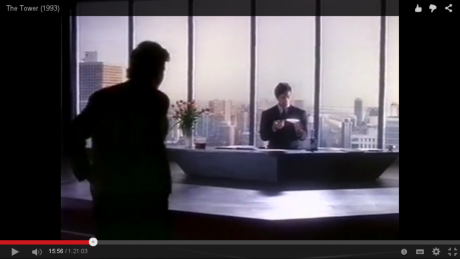 He is sliding trough the construction like a curse, whatever he touches becomes untouchable, wherever he goes, things blow up, heat up, sensors start beeping. His biopic on the opening credits read almost like a NASDQ stock ticker. Not only this, but everybody else around him starts acting funny. In a sense the separation advocated by the Madisonian Model and Montesquieu’s prevention of tyranny is out of question, separation is increasingly absurd in such a converging edifice where innovation outlets, the philosophy of ambition and the guillotine movements of the elevator doors are increasingly timed and synchronized.