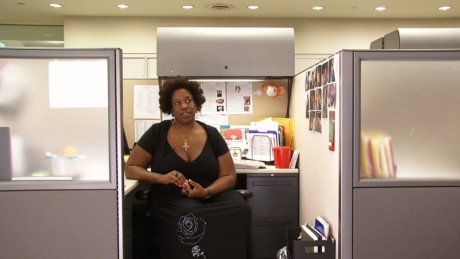 Here is a short documentary made by Canadian filmmaker Zaheed Mawani about the history of the cubicle, interviewing office workers, corporate motivational speakers, office yoga masters,  architects and even people such as George Schurman working for the company who developed the initial cubicle for Action Office II (Herman Miller Research Corporation). On and off in my posts on PlanetNeukoln I’ve been guiding myself trough movies that deal with the feel, texture and asperities of the corporate universe – machinic holograms of perpetuum mobile terminal capitalism (World on a Wire, Parallels, etc), smart gatekeeper killer AI with direct effects (Death Machine, the Lift, The Tower), self-replicating business oligarchy (The Council of the Gods) or their of dogma of cryogenation, suspended life and “frozen societies” (Chiller, Art Encounters). In this sense Three Walls is without a doubt one of my recent fav docus.

If a corporation would actually be this Decepticon Transformer single entity (legally a person) then the cubicle, the most salient mobile system furniture unit of the office universe would be its atomic or cellular building brick. This cellular unit is almost meant by definition to assemble/disassemble itself, to increase visibility angles (from 90 to 120 degrees) density, equality, horizontality, offer both privacy, customization and information flow plus contact with co-workers. From the very beginning lets be clear that this is not another dispute of the relative “freedom” of cave (office landscaping -Bürolandschaft) vs the “monolithic insanity” (Robert Probst – inventor of Action Office I and II) of the sea of cubicles, or a celebration of alternative work spaces partly inspired by the leisure industry (‘office hotelling’). What is at stake is a larger ‘cubology’, ‘cubonics’ or ‘boxology’ – the study of various Chinese boxes (box-in-a-box-in-a-box set of infinite nested boxes) and their concatenation, that would seamlessly incarcerate both white, black and grey puzzle boxes but also hypercubes, Lemarchand boxes and tesseracts (and even boxes as cage-performance space/jungle i.e. Alina Popa developed it in X Uneasy: The Black Box and the Amazonian Forest). 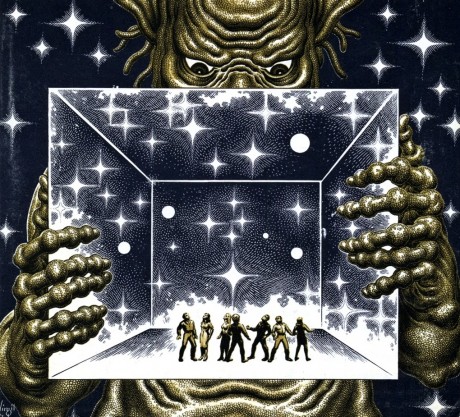 I am more interested here in the flight in/out of the box (‘thinking out of the box’?) and a possible demonology of the boxing (holographic principle as hellish hypercube) universe. An important aspect of this largely unboxed history, would reveal that this flight from what was perceived as temporary monolithism (and what is fact poly- or multi- monolithism) – would result in opening of one box to get entrapped (closed) inside another more high-dimensional and more difficult to disentangle cubic entrapment. Solving one side of the issue, stepping out of the primary box would mean a step up on the potentially graded but infinite scalar hypercube ladder in a way, reaching just another upper level closure and yet another type of monolithic plateau with even more encompassing locks, force-fields, cryptography and vacuum levels (‘insanity’?). 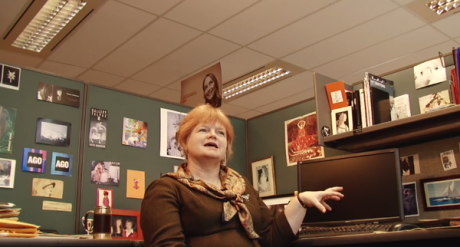 We should never loose sight of the fact that office work has time and time again treated as necessary evil, with various ingenious solution to relieve that evil, improve on it, stimulate initiative and increase communication. After watching the documentary it is probably impossible not to experience the cubicle as a peculiar torture device of late modernity that has started its life as a practical solution. It was an innovation meant to change and improve on the 1930s Taylorist open office of panoptic visibility where serial upon serial desk stood in rows upon rows in what must have been the initial Kafkian ecosystem of the bureaucracy (both state and private). Probst, the inventor started initially by noting that nothing much had changed in the basic layout of corporate spaces EVEN IF working conditions changed radically with a dramatic increase in the amount of data being processed. The old model of the corporate office worker was basically still an office farm but without partitions, without privacy, without any kind of segmentation. Finally a segmented space would be invented in the 60s US that would brake the previous monolithic aporias with open panels and changeable configuration, configurations that would make a compromise between openness and separation, one that would brake hierarchies, that would stride the divide btw intimacy and no intimacy.  Inside the box there is a fine balance – a thin line between becoming too relaxed(read unproductive) when chairs are being too comfortable and becoming crippled after sitting all those hours on end in the worst positions possible. In Romania, there was already a small work related – gymnastic being developed with most of it developed around the proletarian core, now the shift for long hours and endless shifts is being transferred to the new model workers: wearing the blue, grey or white collar. There is an interesting (unaddressed in this documentary) intersection in the history of cubicles (system furniture) and the larger history (inter-species) battery cages used to increase productivity for various animals, including egg laying hens. Battery cages have have animals living in rows upon rows of identical cages, sharing common dividing walls. The debate and outrage regarding battery cages vs free-range production methods somehow parallels the cubicle vs open-plan offices. It is no accident that derisive terms such as ‘cubicle farms’ or ‘cube farms’ have proliferated. 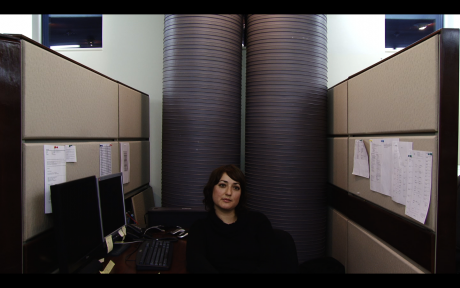 Again what it is very important to remember that the introduction of the cubicle was exactly a particular solution against sameness, against repetitive tasks and the general anomie of the working space. Then, as one of the interviewees said, something happened as if by surprise, something like in a Petri dish, and the whole idea of movable, panel-shifting system furniture phase-shifted, started to crystallize in shapes and orthogonal directions that were not anticipated, or literally unwanted by its initial supporters and developers. What I’m saying is that this is more than just an idea that went to waste. It was no accident that the earlier Action Office I by Probst and George Nelson from Herman Miller R&D that emphasized worker flexibility and the possibility to assume positions best suited to the task had to be scraped and that they had to go back to the drawing board. No matter what psychologists, medievalists, mental health, anthropologists or mathematicians informed them, including their own research into 20th century office history, Action Office I shifted into AO II simply because it was simply too expensive, to difficult to assemble and largely unsuited for gigantic organizations such as corporations. 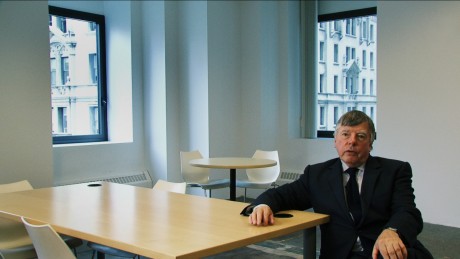 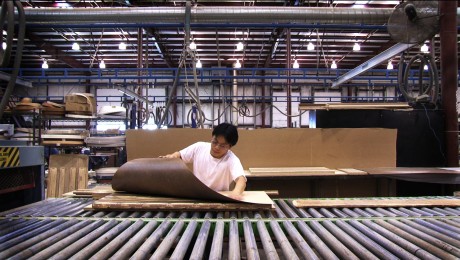 As a result the mobile core of the new AO II was a ‘back-up’ two or three sided vertical division that marked a territory, a personal enclave while at the same time without hindering contact with other and permitting the participation in happenings outside the work enclave. In a sense there is an invisible dynamic, a correspondence between the various open and semi-open or semi-closed boxes, a way in which one flips into the other and vice-versa. The resulting standardization and what some have termed the degeneration of the action office or system furniture into the cubicle farm somehow point to this reversibility or amplification of what has been called the “dehumanizing effect as a working environment” (George Nelson – another of the two inventors who distances himself from his invention). This stepping up, the cascading of dehumanization up the boxing/unboxing levels was such that its creators remarked that “…it is admirable [only] for planners looking for ways of cramming in a maximum number of bodies, for ’employees’ (as against individuals), for ‘personnel,’ corporate zombies, the walking dead, the silent majority. A large market.”  Suffice to say that the first implementation of the AO II was at the Federal Reserve Bank offices in 1963 that would have maximized efficiency in a small area using ‘pods’ made of four cubicle arranged in a swastika (?!) pattern, each with L-shaped desks, a model that looks exactly like the cubicles of today. 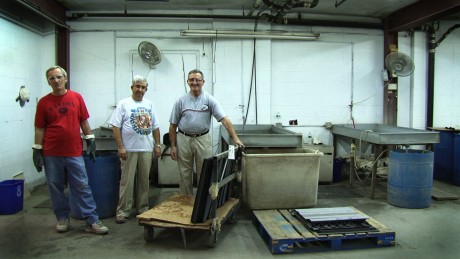 Even with 5 billion in profits, the cubicle space has been largely efficient in one area – in basically sucking countless lives out dry and entrapping people without major career perspectives into something like the equivalent of a desert planet (“sometimes I it is dryer in an office than in a desert” – said one). Most of office workers  interviewed (a majority of them women) have basically scraped their dreams of working or hoping something else. It is a clear (maybe for some too harsh) and no frills look into the core of the office world of today and what people do to survive years of work in a place that is made to crush the bones, paralyze the neuro-motor system and slowly erode the mental health. A suede leather mousepad, a row of atomic mushrooms photos on somebody’s desktop, a shriveled apple, scattering work poop around such as pencils, deleting browsing histories, thinking perpetually to quit, or setting that repetitive snooze as a wake-up call – this are all survival kit palliatives of a crushing, energy-draining space without a horizon.

I really don’t want to minimize or belittle these small acts in any way, because they are essential, and I believe they can become the only way to avoid immediate suicidal outcomes.  There is also another aspect – what it takes to survive, what kind of mental and body conditioning one needs in order to survive higher and higher levels of hypercube boxing. The corporate motivational coach is a real eye opener. He talks exactly how one is to fight any thought that your life is a box, that everything around you is a box. This fight against the box becomes the challenge of your life. And anyway you have to try and convince oneself that it’s not as bad to be in box, and definitely not as bad as in Gaza Strip, China or South Africa. One has to be setting standards, new standards of excellence in your job performance (from call center to banking), new benchmarks by which everything that follows will get measured. And still what comes out – especially in his clean, tabula rasa space (just a phone and an empty board without post-it notes) – is this larger flight from outer to outer box.. .