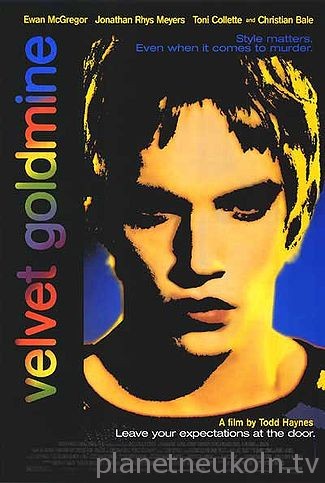 The story follows a British journalist, Arthur Stuart (Christian Bale), who revisits his own past while writing an article about the mysterious disappearance of a former glam-rock star, Brian Slade (Jonathan Rhys Meyers), for an American periodical. Slade’s career had ended during backlash from a publicity stunt: he faked being murdered on-stage, after which he gradually disappeared from the public view entirely. Stuart locates and talks with people connected to Slade, trying to find out what happened to him, and recalls the glam-rock scene of the ’70s in a series of vignettes, which recreate the stories of Slade, Slade’s collaborator and one time lover Curt Wild (Ewan McGregor), Slade’s former wife, Mandy (Toni Collette) and others involved in their lives. The film utilizes a non-linear structure to interweave the stories of the various characters.