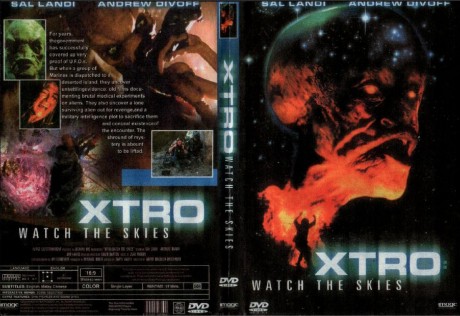 Xtro is a low-budget British science fiction horror film made in 1982 and directed by Harry Bromley Davenport and co-produced by Bob Shaye.

The film was released theatrically in the United States by New Line Cinema in 1983.[1]

Xtro was briefly vilified as a video nasty, especially due to a particularly graphic scene early in film wherein a woman gives birth to a fully grown man. However, it was granted an uncut video certificate by the BBFC shortly after its successful cinema run.

In England, the entire Xtro trilogy was released in box-set, remastered anamorphic widescreen with 5.1 for Xtro II and an interview with director Harry Bromley Davenport covering the production of all three films. 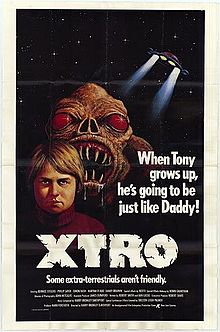 Director Harry Bromley Davenport made two sequels to the film, Xtro II: The Second Encounter and Xtro 3: Watch the Skies.

In March 2010, Davenport confirmed that Xtro 4 was in the works.[3] Speaking to Fangoria.com, he stated:

“I am going to be starting XTRO 4 this summer; you are the first to receive this shattering news,” Davenport tells us. “A script by Daryl Haney is in the works, and my sales guys are salivating. It’s going to be a very odd movie indeed. Sort of back to the roots of the first one, but much stranger and, hopefully, more uncomfortable.”